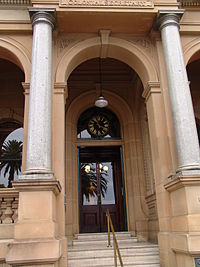 Entrance signed "Colonial Secretary" of the Chief Secretary's Building in Sydney (1873). A statue of Queen Victoria is barely visible through the door.

"Has the custody of all official papers and records belonging to the colony; transcribes the public despatches; charged with making out all grants, leases and other public Colonial instruments; also the care of numerous indents or lists sent with convicts of their terms of conviction, and every other official transaction relating to the Colony and Government; and is a situation of much responsibility and confidence."[1]

In Ireland, the role of Chief Secretary dated from 1660.

In New South Wales the function of Colonial Secretary and secretary to the Governor were separated in 1824.

After the grant of responsible government, this office like its British equivalent, the First Lord of the Treasury was frequently the formal position held by the Colonial Premier because the office of Premier was not mentioned in any legislation. The Cape Colony was unusual in giving the Colonial Secretary at the Cape responsibility for defence.[2] Several of the Australian states and territories retained the title for many decades, the Chief Secretary's Departments ultimately evolving into the modern Premier's Departments in those states. New Zealand abolished the office in 1907.

India, Pakistan, Sri Lanka and some other independent states which were British Colonies still have Chief Secretaries in the provinces, who are next in line after the Governors or Chief Ministers and hold superior powers in the bureaucracy.

In Sri Lanka has nine Chief Secretaries, one for each of the nine provinces. A Chief Secretary is a Special Grade officer of the Sri Lanka Administrative Service and is equivalent to a Permanent Secretary of the central government.

Other parts of the world

The Isle of Man also has a Chief Secretary, currently Will Greenhow, who is head of the island's civil service.