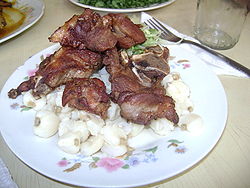 Chicharrón is a dish made of fried pork rinds. It is sometimes made from chicken, mutton, or beef.

Chicharrón is popular in Andalucia, Spain, and in Latin America and other countries with Spanish influence, it is part of the traditional cuisines of Argentina, Bolivia, Brazil (where it is called torresmo), Colombia, Cuba, Dominican Republic, Guatemala, Honduras, El Salvador, Mexico, Nicaragua, Panama, Peru, the Philippines, Puerto Rico, Venezuela, and others. The singular form, chicharrón, is also used as a mass noun, especially in Filipino, where words do not have a pluralized form. They are usually made with different cuts of pork, but sometimes made with mutton, or with beef in Argentina. In Costa Rica, they are usually made from pork ribs or similar cuts; rinds are rarely used.

The pork rind type is the skin of the pork after it has been seasoned and deep fried. In Mexico, they are eaten in a taco or gordita with salsa verde. In Latin America, they are eaten alone as a snack, with cachapas, as a stuffing in arepas or Salvadoran pupusas, or as the meat portion of various stews and soups.

Bolivia - chicharrón is made out of pork ribs seasoned with garlic, oregano and lemon. It is boiled then cooked in its own fat, adding beer or chicha to the pot for more flavor. Pork chicharrón is normally served only on Sundays and is eaten with llajwa, a tomato salsa, and mote, a type of corn. There are other variations of chicharrón made with chicken and fish.

Chile - chicharrones are made out from meat fat, and are typically served with home-made bread.

Dominican Republic - chicharrones, especially chicken chicharrón (also known as pica-pollo), are usually eaten with tostones. The way to prepare it is by washing and drying chicken and cutting it into small pieces, which are seasoned with a mix of lemon juice, soy sauce and salt. The batter is made from flour, pepper, paprika and salt in plastic bag, in which the seasoned meat is then placed and shaken. Pieces are deep-fried (without removing excess flour) until crisp and golden.

Mexico - snack-food company Barcel has commercialized a vegetarian version with chile and lime flavorings since the 1980s. Chicharrón de Puerco and chicharrón de cerdo are distributed by many salty snack companies in Mexico.

Peru - chicharrones can be eaten as an appetizer or snack, and the chicken variant can taste like fried chicken found in the United States. Sides include a kind of red onion relish, fried yuca, and other regional variants. Chicharrones can also be prepared with fish rather than pork.

Philippines - tsitsaron (a derivative of the Spanish word chicharrón), as it is spelled in Filipino. This dish is usually bought from balut vendors as pulutan. It is prepared by deep-frying the dried pork rind with a little salt. It is sometimes eaten with vinegar, chopped chilis in vinegar or with bagoong, lechón[disambiguation needed

] liver sauce, or pickled papaya called atsara. Tsitsarong manok, which is made from chicken skin, and tsitsarong bulaklak, which is deep-fried pig intestines (literally 'flower chicharrón', from its distinctive shape), are also popular.

Puerto Rico - chicharrones are also made with chicken. There are two well known preparations to making chicken chicharrón in Puerto Rico. One way is to marinade the chicken in dark rum, lemon juice or zest, salt, and cracked fresh garlic over night. When ready to fry the chicken is pat dry and tossed in flour that has been seasoned with adobo seco and paprika. The second way to prepare chicken chicharrón is to dip the chicken in an egg and Tabasco mix then in to seasoned flour with adobo seco, paprika, and maybe cayenne pepper. Pork chicharrón is usually mashed and stuffed into mofongo.

United States - Chicharrón are usually made from pig skin. They are usually sold in plastic bags as a snack food item and generically referred to as "pork rinds." They are made in a two-step process: the pork skin is first rendered and dried, and then fried and puffed.[1] In New Mexico, the term is often taken to mean just fried pork fat, sometimes with incidental bits of lean meat.

Venezuela - In central Venezuela, chicharrones are commonly sold alongside main highways as snacks. The recipe usually produces crispy sizeable portions of pork skin with the underlying meat. The cueritos type are also made with pork skin and marinated in vinegar instead of deep fried. They are eaten as a snack.