Marfa is a town in the high desert of far West Texas in the Southwestern United States. Located between the Davis Mountains and Big Bend National Park, it is also the county seat of Presidio County. The population was 1,981 at the 2010 census.

Marfa was founded in the early 1880s as a railroad water stop, and grew quickly through the 1920s. Marfa Army Airfield (Fort D.A. Russell) was located east of the town during World War II and trained several thousand pilots before closing in 1945 (the abandoned site is still visible ten miles (16 km) east of the city). The base was also used as the training ground for many of the U.S. Army's Chemical mortar battalions.

Despite its small size, today Marfa is a tourist destination. Attractions include the historical architecture and classic Texas town square, modern art at the Chinati Foundation and in galleries around town, and the Marfa lights.

Amateur etymologist Barry Popik has shown that Marfa is named after Marfa Strogoff, a character in the Jules Verne novel Michael Strogoff and its theatrical adaptation; the origin was reported in the Galveston Daily News on December 17, 1882, after the Marfa railroad station was established but before Marfa received a post office in 1883.

The Handbook of Texas states that the wife of a railroad executive reportedly suggested the name "Marfa" after reading the name in the Fyodor Dostoevsky novel The Brothers Karamazov.[3] 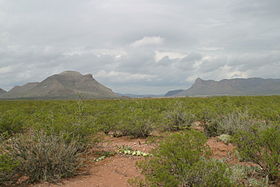 Marfa is in the Chihuahuan Desert

In 1971, Donald Judd, the renowned minimalist artist, moved to Marfa from New York City. After renting summer houses for a couple of years he bought two large hangars, some smaller buildings and started to permanently install his art. While this started with his building in New York, the buildings in Marfa (now The Block, Judd Foundation) allowed him to install his works on a larger scale. In 1976 he bought the first of two ranches that would become his primary places of residence, continuing a long love affair with the desert landscape surrounding Marfa. Later, with assistance from the Dia Art Foundation in New York, Judd acquired decommissioned Fort D.A. Russell, and began transforming the fort's buildings into art spaces in 1979. Judd's vision was to house large collections of individual artists' work on permanent display, as a sort of anti-museum. Judd believed that the prevailing model of a museum, where art is shown for short periods of time, does not allow the viewer an understanding of the artist or their work as they intended.

In recent years, a new wave of artists has moved to Marfa to live and work. As a result, new gallery spaces have opened in the downtown area. Furthermore, The Lannan Foundation has established a writers-in-residency program, a Marfa theater group has formed, and a multi-functional art space called Ballroom Marfa has begun to show art films, host musical performances, and exhibit other art installations. 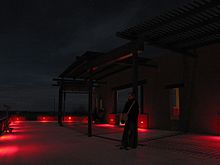 Outside of Donald Judd and modern art, Marfa may be most famous for the Marfa lights, visible on clear nights between Marfa and the Paisano Pass when one is facing southwest (toward the Chinati Mountains). According to the Handbook of Texas Online, "...at times they appear colored as they twinkle in the distance. They move about, split apart, melt together, disappear, and reappear. Presidio County residents have watched the lights for over a hundred years. The first historical record of them recalls that in 1883 a young cowhand, Robert Reed Ellison, saw a flickering light while he was driving cattle through Paisano Pass and wondered if it was the campfire of Apache Indians. He was told by other settlers that they often saw the lights, but when they investigated they found no ashes or other evidence of a campsite.[5]

Presidio County has built a viewing station nine miles east of town on U.S. 67 near the site of the old air base. Each year, enthusiasts gather for the annual Marfa Lights Festival.

These objects have been featured and mentioned in various media, including the television show Unsolved Mysteries and an episode of King of the Hill ("Of Mice and Little Green Men") and in an episode of Disney Channel Original Series So Weird, however the producers/writers had made the countryside of Marfa as a forest area instead of a desert area which Marfa is actually located in. A fictional book by David Morrell, 2009's The Shimmer, is inspired by the lights. The metalcore group Between the Buried and Me make a reference in the song "Obfuscation" (2009).

Filming of Giant and other films 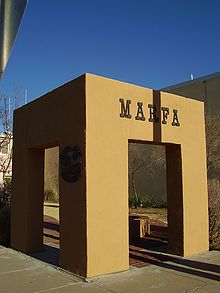 The famous 1956 Warner Bros. film Giant, starring Elizabeth Taylor, Rock Hudson, James Dean, Sal Mineo, Carroll Baker and Dennis Hopper, was filmed in Marfa for two months. Director George Stevens did not have a closed set and actively encouraged the townspeople to come by, either to watch the shooting, or visit with the cast and crew, or take part as extras, dialect coaches, bit players and stagehands.

In August 2006, two movie production units used locations in and around Marfa: the film There Will Be Blood, an adaptation of the Upton Sinclair novel Oil!, directed by Paul Thomas Anderson, and the Coen Brothers' adaptation of the Cormac McCarthy novel No Country for Old Men.[6][7]

The 1976 play Come Back to the Five and Dime, Jimmy Dean, Jimmy Dean, and its 1982 film adaptation, were set in and around Marfa. The film, however, was not shot there.

In 2008, Marfa held the first annual Marfa Film Festival, which lasted from May 1–5.

The music video of 'Home' by Edward Sharpe and the Magnetic Zeros ends in Marfa with a sign reading 'GOODBYE MARFA, TX!!'

The music video of 'Obfuscation' by Between the Buried and Me is set in Marfa. 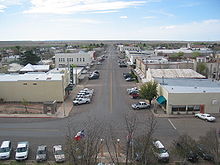 Downtown view of Marfa from atop the Courthouse

There were 863 households out of which 29.3% had children under the age of 18 living with them, 47.4% were married couples living together, 13.1% had a female householder with no husband present, and 35.6% were non-families. 31.4% of all households were made up of individuals and 17.3% had someone living alone who was 65 years of age or older. The average household size was 2.35 and the average family size was 2.99. 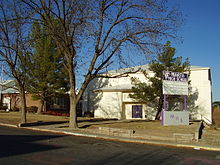 Marfa is served by the Marfa Independent School District. Marfa Elementary School and Marfa Junior/Senior High School, a part of the district, serve the city.

As of October 1, 2009 the city no longer has a local police department. The Presidio County Sheriff patrols the city as well as the county as a whole.

Marfa Magazine is a yearly publication distributed out of Marfa Texas, founded and operated by Johnny Calderon, Jr. Marfa Magazine focuses on current issues and general information about Marfa, Alpine, and Fort Davis.

TimeCar, a car sharing company, rents vehicles by the hour or by the day. Located at the Pizza Foundation Building, 100 East San Antonio St., Marfa, TX 79843. (SE Corner of Route 67 & Route 90). For more information, visit them on the web www.timecar.com

The Amtrak Sunset Limited passes through the city, but does not stop. The nearest stop is located in nearby Alpine.