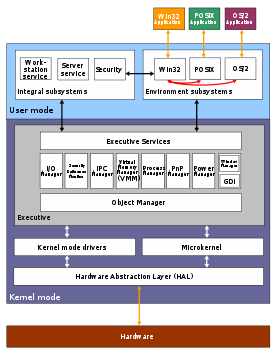 The Windows NT operating system family's architecture consists of two layers (user mode and kernel mode), with many different modules within both of these layers.

The architecture of Windows NT, a line of operating systems produced and sold by Microsoft, is a layered design that consists of two main components, user mode and kernel mode. It is a preemptive, reentrant operating system, which has been designed to work with uniprocessor and symmetrical multi processor (SMP)-based computers. To process input/output (I/O) requests, they use packet-driven I/O, which utilizes I/O request packets (IRPs) and asynchronous I/O. Starting with Windows 2000, Microsoft began making 64-bit versions of Windows available—before this, these operating systems only existed in 32-bit versions.

Programs and subsystems in user mode are limited in terms of what system resources they have access to, while the kernel mode has unrestricted access to the system memory and external devices. The Windows NT kernel is known as a hybrid kernel. The architecture comprises a simple kernel, hardware abstraction layer (HAL), drivers, and a range of services (collectively named Executive), which all exist in kernel mode.[1]

User mode in Windows NT is made of subsystems capable of passing I/O requests to the appropriate kernel mode software drivers by using the I/O manager. Two subsystems make up the user mode layer of Windows NT: the Environment subsystem (which runs applications written for many different types of operating systems), and the Integral subsystem (operates system specific functions on behalf of the environment subsystem). Kernel mode in Windows NT has full access to the hardware and system resources of the computer. The kernel mode stops user mode services and applications from accessing critical areas of the operating system that they should not have access to.

The Executive interfaces, with all the user mode subsystems, deals with I/O, object management, security and process management. The kernel sits between the Hardware Abstraction Layer and the Executive to provide multiprocessor synchronization, thread and interrupt scheduling and dispatching, and trap handling and exception dispatching. The kernel is also responsible for initializing device drivers at bootup. Kernel mode drivers exist in three levels: highest level drivers, intermediate drivers and low level drivers. Windows Driver Model (WDM) exists in the intermediate layer and was mainly designed to be binary and source compatible between Windows 98 and Windows 2000. The lowest level drivers are either legacy Windows NT device drivers that control a device directly or can be a PnP hardware bus.

The user mode is made up of subsystems which can pass I/O requests to the appropriate kernel mode drivers via the I/O manager (which exists in kernel mode).[citation needed] Two subsystems make up the user mode layer of Windows NT: the Environment subsystem and the Integral subsystem.

The environment subsystem was designed to run applications written for many different types of operating systems. None of the environment subsystems can directly access hardware, and must request access to memory resources through the Virtual Memory Manager that runs in kernel mode.[citation needed] Also, applications run at a lower priority than kernel mode processes.[citation needed]

There are three main environment subsystems: the Win32 subsystem, an OS/2 subsystem and a POSIX subsystem.[2]

Windows NT kernel mode has full access to the hardware and system resources of the computer and runs code in a protected memory area.[3] It controls access to scheduling, thread prioritization, memory management and the interaction with hardware. The kernel mode stops user mode services and applications from accessing critical areas of the operating system that they should not have access to; user mode processes must ask the kernel mode to perform such operations on their behalf.

While the x86 architecture supports four different privilege levels (numbered 0 to 3), only the two extreme privilege levels are used. Usermode programs are run with CPL 3, and the kernel runs with CPL 0. These two levels are often referred to as "ring 3" and "ring 0", respectively. Such a design decision had been done to achieve code portability to RISC platforms that only support two privilege levels,[4] though this breaks compatibility with OS/2 applications that contain I/O privilege segments that attempt to directly access hardware.[5]

Kernel mode consists of executive services, which is itself made up on many modules that do specific tasks, kernel drivers, a kernel and a Hardware Abstraction Layer, or HAL.[3]

The Windows Executive services make up the low-level kernel-mode portion, and are contained in the file NTOSKRNL.EXE.[3] It deals with I/O, object management, security and process management. These are divided into several subsystems, among which are Cache Manager, Configuration Manager, I/O Manager, Local Procedure Call (LPC), Memory Manager, Object Manager, Process Structure and Security Reference Monitor (SRM). Grouped together, the components can be called Executive services (internal name Ex). System Services (internal name Nt), i.e., system calls, are implemented at this level, too, except very few that call directly into the kernel layer for better performance.[citation needed]

The term "service" in this context generally refers to a callable routine, or set of callable routines. This is distinct from the concept of a "service process," which is a user mode component somewhat analogous to a daemon in Unix-like operating systems. 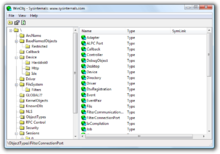 Each object in Windows NT exists in a global namespace. This is a screenshot from SysInternals WinObj.

Handles are identifiers that represent a reference to a kernel resource through an opaque value.[11] Similarly, opening an object through its name is subject to security checks, but acting through an existing, open handle is only limited to the level of access requested when the object was opened or created.[citation needed]

Object types define the object procedures and any data specific to the object. In this way, the object manager allows Windows NT to be an object oriented operating system, as object types can be thought of as polymorphic classes that define objects. Most subsystems, though, with a notable exception in the I/O Manager, rely on the default implementation for all object type procedures.[citation needed]

Each instance of an object that is created stores its name, parameters that are passed to the object creation function, security attributes and a pointer to its object type. The object also contains an object close procedure and a reference count to tell the object manager how many other objects in the system reference that object and thereby determines whether the object can be destroyed when a close request is sent to it.[12] Every named object exists in a hierarchical object namespace.

Cache Controller
Closely coordinates with the Memory Manager, I/O Manager and I/O drivers to provide a common cache for regular file I/O. Uniquely, the Windows Cache Manager operates on file blocks (rather than device blocks), for consistent operation between local and remote files, and ensures a certain degree of coherency with memory-mapped views of files, since cache blocks are a special case of memory-mapped views and cache misses a special case of page faults.

I/O Manager
Allows devices to communicate with user-mode subsystems. It translates user-mode read and write commands into read or write IRPs which it passes to device drivers. It accepts file system I/O requests and translates them into device specific calls, and can incorporate low-level device drivers that directly manipulate hardware to either read input or write output. It also includes a cache manager to improve disk performance by caching read requests and write to the disk in the background.

Starting from Windows NT Server 4.0, Terminal Server Edition, the memory manager implements a so-called session space, a range of kernel-mode memory that is subject to context switching just like user-mode memory. This lets multiple instances of the kernel-mode Win32 subsystem and GDI drivers run side-by-side, despite shortcomings in their initial design. Each session space is shared by several processes, collectively referred to as a "session".
To ensure a degree of isolation between sessions without introducing a new object type, the association between processes and sessions is handled by the Security Reference Monitor, as an attribute of a security subject (token), and it can only be changed while holding special privileges.
The relatively unsophisticated and ad-hoc nature of sessions is due to the fact they weren't part of the initial design, and had to be developed, with minimal disruption to the main line, by a third party (Citrix) as a prerequisite for their terminal server product for Windows NT, called WinFrame. Starting with Windows Vista, though, sessions finally became a proper aspect of the Windows architecture. No longer a memory manager construct that creeps into user mode indirectly through Win32, they were expanded into a pervasive abstraction affecting most Executive subsystems. As a matter of fact, regular use of Windows Vista always results in a multi-session environment.[13]

Process Structure
Handles process and thread creation and termination, and it implements the concept of Job, a group of processes that can be terminated as a whole, or be placed under shared restrictions (such a total maximum of allocated memory, or CPU time). Job objects were introduced in Windows 2000.

PnP Manager
Handles Plug and Play and supports device detection and installation at boot time. It also has the responsibility to stop and start devices on demand—this can happen when a bus (such as USB or FireWire) gains a new device and needs to have a device driver loaded to support it. Its bulk is actually implemented in user mode, in the Plug and Play Service, which handles the often complex tasks of installing the appropriate drivers, notifying services and applications of the arrival of new devices, and displaying GUI to the user.

Security Reference Monitor (SRM)
The primary authority for enforcing the security rules of the security integral subsystem.[14] It determines whether an object or resource can be accessed, via the use of access control lists (ACLs), which are themselves made up of access control entries (ACEs). ACEs contain a security identifier (SID) and a list of operations that the ACE gives a select group of trustees—a user account, group account, or login session[15]—permission (allow, deny, or audit) to that resource.[16][17]

GDI
The Graphics Device Interface is responsible for tasks such as drawing lines and curves, rendering fonts and handling palettes. The Windows NT 3.x series of releases had placed the GDI component in the user-mode Client/Server Runtime Subsystem, but this was moved into kernel mode with Windows NT 4.0 to improve graphics performance.[18]

The kernel sits between the HAL and the Executive and provides multiprocessor synchronization, thread and interrupt scheduling and dispatching, and trap handling and exception dispatching; it is also responsible for initializing device drivers at bootup that are necessary to get the operating system up and running. That is, the kernel performs almost all the tasks of a traditional microkernel; the strict distinction between Executive and Kernel is the most prominent remnant of the original microkernel design, and historical design documentation consistently refers to the kernel component as "the microkernel".

The kernel often interfaces with the process manager.[19] The level of abstraction is such that the kernel never calls into the process manager, only the other way around (save for a handful of corner cases, still never to the point of a functional dependence).

The Windows NT hardware abstraction layer, or HAL, is a layer between the physical hardware of the computer and the rest of the operating system. It was designed to hide differences in hardware and therefore provide a consistent platform on which the kernel is run. The HAL includes hardware-specific code that controls I/O interfaces, interrupt controllers and multiple processors.

However, despite its purpose and designated place within the architecture, the HAL isn't a layer that sits entirely below the kernel, the way the kernel sits below the Executive: all known HAL implementations depend in some measure on the kernel, or even the Executive. In practice, this means that kernel and HAL variants come in matching sets that are specifically engineered to work together.