The David Whitney House is located at 4421 Woodward Avenue in Detroit, Michigan. The building was constructed as a private residence, but is open to the public as The Whitney Restaurant. The Whitney Mansion was listed on the National Register of Historic Places in 1972.[3] 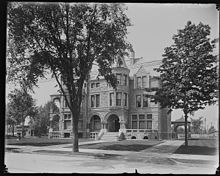 The David Whitney House was built during the period of 1890-94 by the famous lumber baron David Whitney Jr., who was considered not only one of Detroit’s wealthiest personalities, but also one of Michigan's wealthiest citizens.[3] The house is estimated to cost $400,000 (approximately $10,500,000 in today’s economy) [4] and was featured in several newspapers of that time. The house is constructed using rose-pink South Dakota Jasper stone.[3] It is measured to be 21,000-square-foot (2,000 m2) and has 52 rooms (including 10 bathrooms), 218 windows, 20 fireplaces, and a secret vault in the dining room, an elevator, and numerous Tiffany glass windows. The Tiffany glass windows have been estimated to be worth more than the house itself.[5] The window designs often feature themes oriented around the purpose of the rooms they are located in. For example the music room’s windows are themed towards elements of music, as well as images of St. Cecilia: the patron saint of music. The grand staircase features a massive stained glass window portraying a knight, paying homage to the various members of the Whitney family who were knighted, as well as their lineage to Royal blood line in England. The house was the first residential home in Detroit to have a functioning elevator for personal use. The house has recently been featured as a filming location in Detroit’s up and coming film industry’s movie “LOL” starring Miley Cyrus, and Demi Moore.

David Whitney Jr. was born in 1830, Watertown, MA.[6] Whitney made his millions in MA as a lumber baron. He moved to Detroit, MI from Lowell, MA where he had established himself as a lumber baron, in 1857 at the young age of twenty-seven. Starting a joint venture with his brother Charles, he continued to expand his vastly successful lumber business into Ohio, Indiana, and Pennsylvania. Upon arriving in Detroit, he surrounded himself by the community’s wealthiest and most respectable families. Whitney soon earned the nickname of “Mr. Woodward Avenue”, due to his keen interest in real estate around the Detroit area. He soon began investing in numerous buildings and in 1890; he built the famous five-story Grand Circus Park Building, in what is today considered a historic park in the heart of Detroit. Whitney Jr. was always fascinated by the Detroit Athletic Club (DAC). Ever since the DAC’s establishment in the 1887, it has been revered as “one one of the finest private clubs in the country, an elite organization deeply committed to upholding the traditions and elegance of its glorious pasts.”[7] Part of the DAC’s grounds is now under the possession of Wayne State University. Included among the elite members of the original DAC, were Whitney and his son David C. Whitney. This influenced his choice for the location of the Whitney House as it overlooked the grounds of the DAC. The Whitney mansion was built between 1890 and 1894, and estimated to have cost approximately $400,000. After David Whitney’s death in 1900, his family continued to reside in the mansion till 1920. It was converted into an upscale restaurant in the 1986. Today, many of the members of the Whitney family reside in the Grosse Pointe area of Michigan.

Dating back to the renovations in the mid-1980, there have been rumored occurrences of supernatural activities on all three floors of the Whitney house. The causes of these events have been linked to the story of David Whitney Jr. and his wife both dying inside the mansion.[8] To this day, some people believe that the ghost of David Whitney Jr. haunts the Whitney mansion. One of the most haunted areas in the house appears to be the elevator.,[8][9] There are reports of the elevator moving on its own between the floors without any passengers. Other unexplained apparitions have been reported on the second and third floors. One evening at closing, a staff member witnessed an older gentleman gazing out of the second floor dining room window, when he was asked to leave; the figure simply vanished into the floor.[10] Reports by the mansion’s staff members of sounds of utensils being stacked and table settings being moved all on their own, have only added to the mystery of the Whitney mansion.[8]

The award winning cuisine offered at The Whitney offers cuisine that can be classified as stylishly American. They offer a variety of beef, fish, and seafood, lamb and veal meat items. The Whitney serves: Brunch, Lunch, Dinner, and Dessert. Specialty menus include Detroit Symphony Orchestra Package, The Whitney Wine Collection, and Mr. Whitney’s Table Menu.[6] Private Dining Area Packages are available for a more sophisticated and intimate dining experience. The Whitney offers private rooms for large groups and banquets. Reservations can be made over the phone or via internet on the restaurant's official website. It offers arrangements from an intimate dinner for two, to accommodating large parties ranging from 10 - 400 guests. Housed within the restaurant on the third floor, is an exclusive lounge named the “Ghost bar”. It offers numerous night life options like live jazz music, vocalists and DJ’s . The Whitney's classically remarkable ambiance and its convenient location in the heart of Detroit, makes it an iconic restaurant.