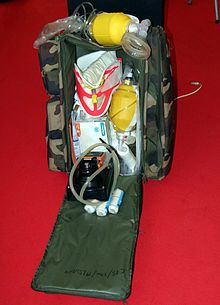 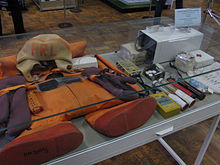 A survival kit is a package of basic tools and supplies prepared in advance as an aid to survival in an emergency. Military aircraft, lifeboats, and spacecraft are equipped with survival kits.

Survival kits, in a variety of sizes, contain supplies and tools to provide a person with basic shelter against the elements, help them keep warm, meet their health and first aid needs, provide food and water, signal to rescuers, and assist them in finding their way back to help. Supplies in a survival kit normally contain a knife (often a Swiss army knife or a multi-tool), matches, tinder, first aid kit, bandana, fish hooks, sewing kit, and an LED flashlight and laser pointer with long shelf-life batteries (usually lithium type).

Civilians such as forestry workers, surveyors, or bush pilots, who work in remote locations or in regions with extreme climate conditions may also be equipped with survival kits. Disaster supplies are also kept on hand by those who live in areas prone to earthquakes or other natural disasters. For the average citizen to practice disaster preparedness, some towns will have survival stores to keep survival supplies in stock.

Since the primary goal of a survival kit for lost or injured persons is rescue, this part of the kit is the most essential.

Lifeboat survival kits are stowed in inflatable or rigid lifeboats or life rafts; the contents of these kits are mandated by coast guard or maritime regulations. These kits provide basic survival tools and supplies to enable passengers to survive until they are rescued. In addition to relying on lifeboat survival kits, many mariners will assemble a "ditch bag" or "abandon ship bag" containing additional survival supplies. Lifeboat survival kit items typically include:

Other tools and boating items

Survival kits for military aviators are often modified according to the environment of operations:

The US Army uses several basic survival kits, mainly for aviators, which are stored in canvas carrying bags. Aviators in planes with ejection seats have survival kits in the seat pan and the survival vest (SRU-21P) worn by US helicopter crews also contains some basic survival items.

"Mini survival kits" or "Altoids tin" survival kits are small kits that contain a few basic survival tools. These kits often include a small compass, waterproof matches, a fishing hook and fishing line, a large plastic garbage bag, a small vial of bleach, a small candle, a jigsaw blade, an Exacto knife blade, and a safety pin. Pre-packaged survival kits may also include instructions in survival techniques, including fire-starting or first aid methods. In addition, parachute cord can be wrapped around the tin. The parachute cord can be used for setting up an emergency shelter or snaring small animals. They are designed to fit within a container roughly the size of a mint tin.

Another level in some preparedness plans are Vehicle Kits. In some cases, supplies and equipment may be loaded into vehicle such as a van or truck with bicycle racks and an extra “reserve” gas tank. Some survivalists also carry a small (e.g., 250 cc) off-road-capable motorcycle in the van or truck.

Food supplies in the bug-out vehicle include hundreds of pounds of wheat, rice, and beans, and enough honey, powdered milk, canned goods, bottled fruit, vitamins, dehydrated fruits and vegetables, salt, pepper, spices, and oil for several months. In addition, the kits often contain high-calorie energy bars, a cooking kit, utensils, liquid soap, and towels. The water supplies may include bottled water, filtering kit, bottles, collapsible water containers, and chlorine bleach for water purification. Food preparation and washing equipment may include items such as a grain grinder, a bread mixer, a strainer, a manual can opener, a steam canner with canning jars and O-rings, cutlery, knives, an electric 12-volt cooler icebox, kerosene lamps and heaters, kerosene or propane stoves, extra fuel, a clothes wringer, a foot-operated treadle sewing machine, and an electric hot plate (which would require an inverter to operate off a car battery).

The communications equipment may include a multi-band receiver/scanner, a citizens band (CB) radio, portable “walkie-talkies” with rechargeable batteries, and a portable battery-powered television. The power supplies may include a diesel or gasoline generator with a one month fuel supply, an auto battery and charger, extension cord, flashlights, rechargeable batteries (with recharger), an electric multi meter, and a test light. Defense items include a revolver, semi-automatic pistol, rifle, shotgun, ammunition, mace or pepper spray, and a large knife such as a KA-BAR or a bowie knife.

Tools may include cutting tools such as saws, axes and hatchets; mechanical advantage aids such as a pry bar or wrecking bar, ropes, pulleys, or a 'come-a-long" hand-operated winch; construction tools such as pliers, chisels, a hammer, screwdrivers, a hand-operated twist drill, vise grip pliers, glue, nails, nuts, bolts, and screws; mechanical repair tools such as an arc welder, an oxy-acetylene torch, a propane torch with a spark lighter, a solder iron and flux, wrench set, a nut driver, a tap and die set, a socket set, and a fire extinguisher. As well, some survivalists bring barterable items such as fishing line, liquid soap, insect repellent, light bulbs, can openers, extra fuels, motor oil, and ammunition.

The US government's Homeland Security website provides a list of in-home emergency kit items.[2] The list focuses on the basics of survival: fresh water, food, clean air and materials to maintain body warmth. The recommended basic emergency kit items include:

Below is list of commonly recommended items for an emergency earthquake kit:

For hurricanes, National Oceanic and Atmospheric Administration (NOAA) recommends that the 'disaster bag' include:[3]

The term "survival kit" may also refer to the larger, portable survival kits prepared by survivalists, called "bug-out bags" (BOBs), "Personal Emergency Relocation Kits" (PERKs) or "get out of Dodge" (GOOD) kits, which are packed into backpacks, or even duffel bags. These kits are designed specifically to be more easily carried by the individual in case alternate forms of transportation are unavailable or impossible to use.

The Bug-out Bag is presented by many to be the first level of preparedness that anyone should put together, simply by virtue of its overall usefulness. As noted elsewhere, the man-portable kit can be used when you don't have to leave. It can be thrown into a vehicle when the situation allows you to drive away from the area. It also provides you with a kit that can be carried out of an affected area if the damage is too great, such as when found after a severe earthquake, to drive a vehicle over rubble or obstacles.