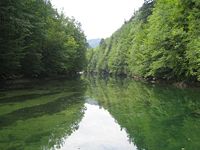 The Idrijca River near the Wild Lake 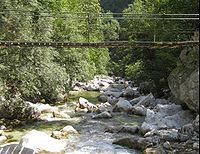 The river basin extends over 598 km2. The major tributaries are the Belca, Zala, Cerknica, and Bača from the right and the Nikomlja, Kanošica, and Trebušica from the left. One of the right tributaries is also the Jezernica River, which originates from the Wild Lake (Slovene: Divje jezero). Being only 55 m long, the Jezernica is the shortest river in Slovenia.

The river has many fish, among which the Salmo marmoratus, the Rainbow Trout, and the Grayling are noteworthy. In the past, timber was driven down the Idrijca to Idrija to be used as pillars in the Idrija mercury mine. Special logging sluices (Sln. klavže) were employed for this purpose from the 17th until the 19th century.

The area of the upper Idrijca has been proclaimed the Upper Idrijca Natural Park. It encompasses numerous karst features and diverse plant species. During World War II the Pavla partisan hospital stood there.