Be Yourself (Audioslave song)

Be Yourself (Audioslave song)

Infobox Single
Name = Be Yourself 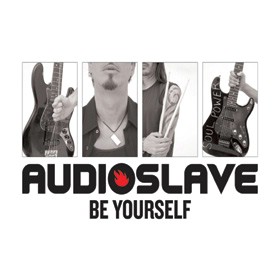 Next to , it is considered the band's most well known song, and is still played on radio stations world wide.

It is the theme of the "2005 RAW Diva Search" which was held by (WWE), and was temporarily used as the entrance music of the winner of that contest, . It was also used in the "Scrubs" season six premiere episode "". ' outfielder also used the song before his at-bats at games in 2006.

There was a contest held by in which fans of the band could submit their pictures, over two dozen of which were selected and featured on the 7" Vinyl release of the single.

The lyrics were inspired by events from frontman 's own life. "The 'be yourself' part really just came from a lot of things that I've gone through in my life and a lot of different changes and all the different tragedies and all the horrendously stupid mistakes I've made in my personal life, and wanting to be able to make up for those things and wanting to be able to not be ashamed, all that stuff," he explained. "You know, that's the one thing about getting older that's better, and this song kinda says it so simply, to a degree that 10 years ago I would've been embarrassed to put it in a song 'cause it is so simple. But there it is."

The video was filmed in an old hotel in downtown and directed by music video veteran who has directed videos for , , and and made his feature film directorial debut with Constantine. It begins with the band playing the song, a close-up of playing his guitar for the most part. Close-ups of singing follows, along with more of Morello's guitar. The band is then shown, after the chorus, in a dark, isolated room with large windows, much like the room in their video for . Close-ups of Morello during the guitar solo follow, with abstracted views of Cornell, while lights in the background change colors quickly. During the last chorus, lights in the background flash colors of red.

Cornell has said that the band modeled the concept after ' film "Let It Be". He said: "If you watch 'Let It Be', the look of the film makes the band look like it's an important happening. I just wanted to look important, like things looked when I was a child."

This video is much like the video from their second single, , where as the band is only shown playing in a dark room.