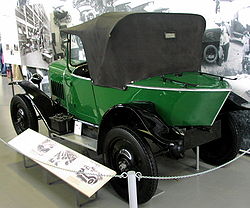 Opel Laubfrosch: the 'boat deck' style tail was a distinguishing feature of the Opel and of the Citroën which it flattered.

The Opel 4 PS, popularly known as the Opel Laubfrosch (Opel Treefrog), is a small two seater car introduced by the then family owned auto maker Opel, early in 1924. Subsequently, various versions of the little Laubfrosch were produced until it was replaced by the Opel 1.2 litre, itself a direct ancestor of the first Opel Kadett, in 1931.

Initially introduced as the Opel 4/12 PS, and manufactured at Opel’s Rüsselsheim plant, this was the first German car to be assembled on a Ford inspired production line. It was aimed at the lower end of the German auto market, and clearly intended, by the standards of the day, for volume production: it sold well, with approximately 120,000 produced by 1931.

The official name referred to the fact that the car’s engine size gave it a fiscal horse power of 4 PS (4 hp).

The origins of the Laubfrosch soubriquet are not entirely clear, but may refer to the fact that the cars were normally painted green, which by tradition is a lucky colour in Germany. Emphasis on the colour also served to differentiate the car from the Citroën 5 CV which normally turned up painted yellow and was accordingly sometimes known as the Petit Citron (little lemon).

The 4 PS ushered in Germany's age of mass motorisation, and was attractively priced on launch at 4,500 Marks. By 1930 Opel had produced 100,000 of these cars: initial investment costs had presumably by now been amortized, since the selling price had come down to 1,990 Marks. This was a deflationary period for the major European economies, but even in real money terms, the Laubfrosch became substantially cheaper during its production run. Germany’s first mass produced car could be priced to sell in the volumes that had, by 1930, established Opel, as Germany’s leading volume auto producer. It is almost certainly because of the car's success and the state of the art production facilities at Rüsselsheim that in 1929 General Motors purchased an 80% holding (subsequently increased to 100%) in the Opel family's auto business.

Opel’s Rüsselsheim plant may have contained the first automobile production line assembly system in Germany, but the first automobile production line in Europe had been created by André Citroën who had initially adopted Henry Ford’s system for the production of munitions, and subsequently applied the technique to production of the Citroën Type A. It was not merely the production system that Opel took from Citroën. The two seater Opel 4 PS when launched in 1924 bore an uncanny resemblance to the little Torpedo bodied Citroën 5 CV which had been launched in 1921. Sources differ as to whether Opel purchased the right to assemble the Citroën under licence, or merely copied the design.

There were differences. The Opel’s wheelbase was longer by 5 mm and the look of its radiator was different. The early Opels were mostly green whereas the early Citroëns were mostly yellow. Under the skin, the Opel had a twelve volt electrical system at a time when most cars (including the Citroën 5 CV) used a six volt system. And the Opel’s four cylinder water cooled engine size was larger, at 951 cc, than the Citroën’s 856 cc. André Citroën nonetheless felt justified in launching a legal action against Opel, and it is not immediately clear just how Opel successfully defended their position.