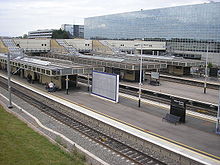 The main body of Milton Keynes Central, showing the triple island platform layout and the footbridge. The large station building provides the backdrop. Platform 6 is closest to the camera.

Milton Keynes Central has a total of seven platforms. Platforms 1 and 3 are the south and northbound slow platforms, while 4 and 6 are the south and northbound fast platforms. Platforms 2 and 5 are reversible, being slow and fast respectively. Platform 2 is frequently used by terminating services from London Euston and East Croydon, whilst platform 5 is used mainly by the London Midland service to Crewe. Platform 2A is a four-car south-facing bay platform built for the extension of Marston Vale Line services into Milton Keynes Central. To the north of the station the six lines reduce to four (two slow and two fast), whilst there is a mile of five-track running to the south before this also reduces back to four. 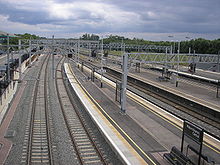 Looking south from Milton Keynes Central, showing the bay platform 2A and the track on the left, which leads into platform 1 under the bridge. The bridge in the middle distance carries H6 Childs Way.

In May 2006, the Department of Transport announced a plan to upgrade the station.[2] The first phase added a down fast line platform 6, so that the existing platform 5 could be used for stopping express trains in either direction. The second phase provided an additional terminating bay platform (2A) for the Marston Vale Line Bedford/Bletchley service via the WCML to Milton Keynes Central. This new 4-car bay platform is indented into platform 1. The original platform 1 line was extended northwards from 'bay' to 'through' (becoming the up slow line), and platform 2 line is now a 'centre' terminating and reversing line, avoiding conflicting crossing movements. This work was completed on 29 December 2008. However, Marston Vale Line services to Bedford are not expected to start before 2012 at the earliest.[3]

More speculatively, a "very good operating and business case" has been made to Government to reopen the western section of the historic Varsity Line from Oxford and extend the service via Bletchley and the WCML to Milton Keynes Central.[4] In April 2008, the Department for Transport responded to an e-petition for support on East West Rail by reiterating that they would encourage private funding.[5]

The station is the terminus for many bus services and almost all intra-city buses stop there. The frontage of the station has six bus stops, four for local services and two for long-distance services. Virgin Trains operate a coach service from the station to Luton Airport, additionally providing a direct link between Milton Keynes and the Midland Main Line at Luton station[6]. Stagecoach stop here on their route from Oxford to Cambridge and their route from Milton Keynes to Northampton and Peterborough. (For National Express coach services, see Milton Keynes Coachway).

The station square itself is a favourite site for skateboarding and freestyle BMX and as a result the granite facings of the planting surrounds have suffered from the continuous bumping and grinding. This has lessened somewhat since the opening of a dedicated skateboarding park (Sk8 MK) close to the central bus station.[7] At the end of June 2011, the Borough Council announced that work would begin in August 2011 to restructure the lanes immediately in front of the station, giving turnback facilities to taxis (on the one hand) and minicabs and private cars (on the other), with two through routes for buses and coaches with associated shelters.[8] 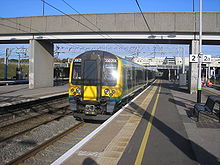 A London Midland class 350 standing at platform 2 after having terminated with a service from London. This will form one of the two trains an hour which start from Milton Keynes Central when it returns to London.

Milton Keynes Central is a principal stop on London Midland's services from Birmingham New Street to London and from Crewe to London Euston. All London-bound trains run to Euston, with some only stopping at Watford Junction and other with a more intermittent stopping pattern. The pattern is as follows (some peak hour and morning/evening services call also at Apsley, Kings Langley and Bushey): 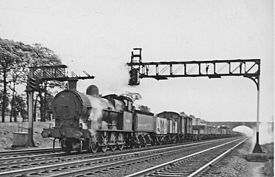 Before Milton Keynes Central was built. The WCML near Loughton Siding signal box in 1957

Virgin Trains stop many of their inter-city trains here, with three services an hour in each direction off-peak on weekdays. These are the services to Birmingham New Street, Manchester Piccadilly and Chester. Additional services operate at other times to Liverpool Lime Street, Glasgow Central, north Wales and other destinations.

Since 2009 Milton Keynes has also been served by Southern, who provide an hourly service to South Croydon, running via west London and connecting with services to Brighton. Across the three operators, six trains per hour head north and eight south from the station.

The station and its plaza were used in the movie Superman IV as a substitute for the United Nations building. Other scenes were shot in the Central Milton Keynes area.