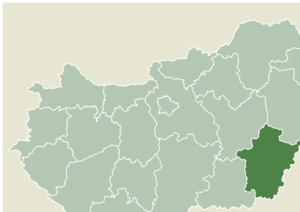 Békés County ( _hu. Békés megye), is an administrative division (county or "megye") in south-eastern , on the border with . It shares borders with the Hungarian counties Csongrád, and . The capital of Békés county is . The county is also part of the euroregion.

Békés county lies on the (Great Plain), it is a flat area with good soil. Average rainfall is 645 mm/year. One-fifth of the natural gas resources of Hungary can be found in Békés. The river Körös/Criş runs through the county.

The area has been inhabited since 5000-4000 BC. Before the arrival of the several other tribes lived in the area.

The castle of Gyula was built in the early 15th century. Gyula was the most significant town of the county at that time, and became county seat under Matthias I. It was an important fortress during the but it was captured in 1566. During this time several towns were destroyed in the area.

In the early 18th century, after the Ottomans were expelled, the county was repopulated, not only with Hungarians, but with (in the towns Békéscsaba, Endrőd, Szarvas, Tótkomlós), (Battonya), (Németgyula, Elek) and (Kétegyháza). Most of the foreign population was assimilated by the mid-19th century.

The agricultural importance of the county and the new railway line between Pest and Békéscsaba (finished in 1858) brought development, which was quickened when Hungary lost its southern territories to Romania after and Békéscsaba had to take over the role of the lost cities.

The population growth peaked in 1950 (472,000), in the same year when Békéscsaba became the county seat. During the following years the county was industrialized, like most of Hungary, and the population of the cities and towns grew.

The regional structure of Békés county is typical of the Great Plain: it has a small number of villages, but those are large, both by area and by population. There are several farmsteads too. 70% of the population lives in cities and towns, 17% in the county seat.

(ordered by population, according to the 2001 )