This Boot Is Made for Fonk-N

This Boot Is Made for Fonk-N 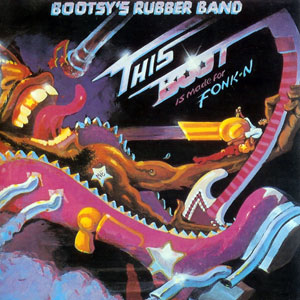 "This Boot is Made for Fonk-N" is the fourth album by the American band . It was released through in April 1979. Unlike previous albums by Bootsy's Rubber Band, this album did not generate any hit singles. The album was more experimental in nature than previous efforts. It would also mark the last time that the name "" would be used on a Bootsy Collins related project until the 1982 12" single release "Body Slam".

The album's cover was drawn by album artist and included an 8-page comic book entitled "The Almost Finished Comic" also drawn by Loyd.

The album was produced by George Clinton and under the aliases Dr. Funkenstein and Starr-Mon. The album was reissued first in 1990 by the Warner/Pioneer company in Japan and then by Warner Music-Europe. In 2007, the album was licensed through and reissued through the Collectors Choice music service.

Three singles were released from the album:

The single "Bootsy (Get Live)"/"Pt. 2" features almost two minutes of music that was not included on the album version and has never been released on CD. The B-side of "Jam Fan (Hot)", "Shejam (Almost Bootsy Show)", featured an instrumental version of the song that also was not on the album and has not been issued on CD.