Crowell is a city in Foard County, Texas, United States. It serves as the county seat[3], and the population was 1,141 at the 2000 census.

According to the United States Census Bureau, the city has a total area of 1.9 square miles (4.9 km2), all of it land.

There were 465 households out of which 29.7% had children under the age of 18 living with them, 50.3% were married couples living together, 10.3% had a female householder with no husband present, and 37.0% were non-families. 34.4% of all households were made up of individuals and 21.7% had someone living alone who was 65 years of age or older. The average household size was 2.36 and the average family size was 3.08. 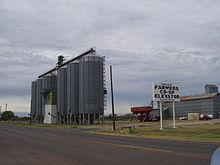 Located between the Pease and North Wichita river , the area has long been home to a variety of hardy animal and plant species. Native grasses tend to be hardy and drought-tolerant. Tree varieties include bush cedar, mesquite, hackberry, mulberry, and pecan, in addition to several imports that thrive in the warm, semi-arid conditions. Native animals species include coyote, squirrels, badgers, raccoons, and the occasional fox. Deer have also become plentiful in recent decades, as have feral pigs. Bird species include quail, dove, and several types of migratory waterfowl. Crowell is on the migration path of the monarch butterfly.

Crowell is only a few miles from the re-capture location of Cynthia Ann Parker. Known locally as the 'Pease River battleground', Cynthia Ann, captured as a child by raiding Indians, was recaptured here as an adult by U.S. soldiers. Cynthia Ann was the mother of Quanah Parker, considered the last great Chief of the Comanche.

Though few notables and celebrities call Crowell home there remain some worth mention. Former football star Dick Todd set long-standing records as a running back for Texas A&M University. He then went on to play for, and eventually coach, the Washington Redskins. Todd's son, Denny, died as a teenager from injuries sustained on the football field. His memory is honored each year with an award in his name. The award is presented to the football team member who shows the greatest personal contribution to the team, both on and off the field.

The remote, rural location minimizes light pollution, making for an excellent view of the night sky. As a result Crowell is also home to Comanche Springs Astronomy Campus, a 50-acre (200,000 m2) observatory built by Three Rivers Foundation for the Arts & Sciences. The economy is almost solely agrarian. Beef cattle, wheat, and cotton are the primary sources of income and employment. Hunting leases are quickly becoming a notable contributor to the local economy. The single manufacturing industry is a cap factory. Formerly owned by the DeLong company, the factory is now owned by a group of local investors.

Though a small, rural community, Crowell still has stop-worthy interests. In addition to the observatory, there is an amazingly nice museum built by the Foard County Historical Society. Housed in the former fire house, the museum boasts interesting artifacts from the history of Crowell and environs. Most notable is the one-of-a-kind scale town. Designed to reflect the historically notable businesses in city history, the diorama-style exhibits are an interesting change from 'regular' museums. Just across the street from the Firehall Museum is the Farm Implement museum which is, if nothing else, interesting in its sheer variety.

In 2009, the Zion Lutheran Cemetery was named an historic Texas cemetery by the Texas Historical Commission. The cemetery is located just west of the Zion Lutheran Church near the intersection of FM 2073 and FM 2074 several miles off U.S. Highway 70 between Lockett and Crowell.[5]

The City of Crowell is served by the Crowell Independent School District.