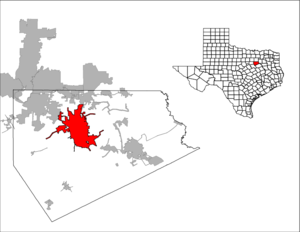 Waxahachie was the birthplace of , considered the oldest in the of the , and also of , a professional golf legend.

There were 7,325 households out of which 36.1% had children under the age of 18 living with them, 54.7% were married couples living together, 14.5% had a female householder with no husband present, and 26.3% were non-families. 21.9% of all households were made up of individuals and 9.3% had someone living alone who was 65 years of age or older. The average household size was 2.73 and the average family size was 3.18.

The first syllable is pronounced "wahks", not "wax" as is often the case. Also, the official Native American meaning of the name is "cow creek" or "buffalo creek" and is not the name of a Native American tribe which is a common misconception. The word "creek" in some translations is "chips" making the town name mean "buffalo chips". Another, much more believable etymology for the name is insisted on by speakers of Wichita, the language of the tribe which used to live in the area but now lives mostly around Anadarko, Oklahoma. Wichitas claim the name comes from their word "waks'ahe:ts'i" (The apostrophe represents a glottal stop, like the middle sound in "oh oh"; "a" is schwah ("uh"); "e:" sounds almost like the "a" of "hat"; "ts" before "i" in this language often sounds like "ch" to English speaking ears; "i" has the continental value, like the one in English "machine"). It means 'fat wildcat'. Source: Dr. David S. Rood, linguist at the University of Colorado, who has been studying the Wichita language since 1965.

The city is home to . Waxahachie is also widely known for being the site of the now-defunct .

It is also locally known for its elaborate , considered by many to be among the most beautiful of Texas's older courthouses. The town also features many examples of and Gingerbread homes, several of which have been converted into s. The city's annual Gingerbread Trails festival features tours of many of these homes.

Employment opportunities in the city are highly oriented toward industry: Owens Corning Fiberglas, Georgia-Pacific, and neighboring Texas Industries and Holcim.Positions for these companies are mainly filled through the Texas Workforce Commission which has an office in the city.

Among the larger non-industrial employers in the city are Baylor Medical Center and The Waxahachie Independent School District?

Waxahachie is served by the Waxahachie Independent School District. The district, recently identified as a rapidly growing districtFact|date=April 2007, has begun construction on several new campuses. There are currently five elementary campuses, two middle school campuses, a ninth grade center, and two high schools. Waxahachie Global High School, a T-STEM school emphasizing instruction in science, math and technology in a small-learning-community environment, opened on August 27, 2007. Two additional schools are currently under construction and are expected to be finished for the 2008 school year.

WISD aims to offer all of its students a well-rounded education and offers AP and Dual Credit courses as well as varied vocational courses. Waxahachie High School is classified as 4A and offers a range of extracurricular activities to its students, including football, men's and women's basketball, men's and women's soccer, baseball, softball, golf, tennis, concert and marching band, drama, choir, drill team, and dozens of academic teams and clubs. Several of the school's programs have achieved national recognition in recent years.

Two post-secondary educational institutions have campuses in the city of Waxahachie. , a junior college located in Corsicana, TX, has a branch in Waxahachie. is a private four-year university affiliated with the offering accredited undergraduate and graduate degrees.