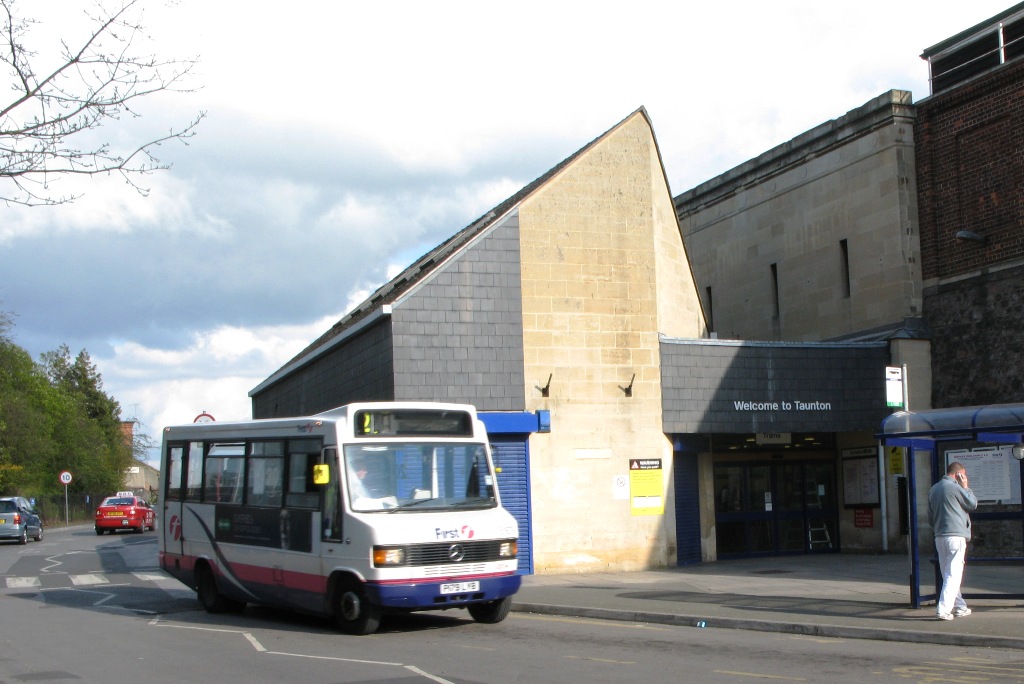 Taunton railway station is a junction station on the , convert|143|mi|km from .

Originally opened on 1 July 1842 as part of the , Taunton was the terminus of the line until a new temporary terminus was opened on 1 May 1843 further west at Beambridge.

's original design was for a with two platforms, each with their own buildings and s, placed on the south side of the line. An hotel was built between them and the .

A series of branches opened in the area during the next thirty years. While none of them had a junction in Taunton, the trains were generally run through to Taunton to provide connections. These were the line (1 October 1853); the to Watchet (31 March 1862); the (11 September 1866); and the (8 June 1871, extended to Barnstaple 1 November 1873).

The station was unable to cope with all these extra trains and passengers so a major rebuilding was completed on 17 August 1868.

The platforms were extended again in 1895. Now covering the whole length of the original single-sided station, they were the longest platforms on the which had amalgamated with the Bristol and Exeter company on . New bay platforms were added to handle the trains from the branch lines.

In the 1930s the lines through Taunton from to Norton Fitzwarren were widened from two to four tracks; those east of Taunton were brought into use on 13 December 1931 and those to the west on 14 February 1932. [cite book | last = Cooke | first = RA | title = Track Layout Diagrams of the GWR and BR WR, Section 16: West Somerset | publisher = RA Cooke | date = 1979 | location = Harwell ] This work forced another rebuilding of the station. The train shed was dismantled and new buildings constructed on the up (north) side along with a new island platform in the middle of the station.

Today the original "down station" building survives, along with the hotel and the extensions added in 1868. An examination of the brickwork on the south-side building reveals where the footbridge was removed in favour of the present subway. On the north side, the ticket office dates from 1983 but the remaining buildings generally date from the 1932 rebuilding and stand on foundations from 1868. The goods warehouse is largely derelict and most of the engine shed has been razed to the ground except for an asbestos-clad repair shop built in 1932 and the ramp that used to serve an elevated coaling stage. The engine sidings are still used by engineers' plant machines; Freightliner locomotives are generally stabled at Fairwater Yard but occasionally use the old engine shed sidings for additional storage space. The avoiding line is truncated but serves as a headshunt for the long engineers trains using Fairwater Yard.

The platform above the ticket office is Platform 5, which is the main platform used by trains towards London Paddington and also Bristol and the north. The station buffet is situated on this platform. An east-facing bay platform, Platform 6, is beyond this; it only sees occasional use nowadays, mainly being used for local trains towards Bristol.

The southerly platform is Platform 2 and is the main platform for services to Exeter and beyond. Trains can also start from this platform towards London and Bristol if required. At the north end is the bus shelter for rail-link buses to and . It has level access from a second car park.

At the west end of this platform is another bay platform, Platform 1. While this is signalled for passenger trains it is not generally used for these. Behind this are some sidings used by the engineers department for stabling on-track plant, and the disused . The line behind this is the headshunt for Fairwater Yard.

Terminating trains from Bristol that need to cross to Platform 2 or 3 have to run forward towards Fairwater and then return to the station once the driver has changed ends. To reach Platform 6 they have to make this move and then run right through the station, the driver change ends, and then reverse into Platform 6. First Great Western have proposed [cite web| title =Network Rail Business Plan 2007: Route 12| publisher =Network Rail| url =http://www.networkrail.co.uk/browse%20documents/BusinessPlan2007/PDF/Route%2012%20Reading%20to%20Penzance.pdf| format =] that alterations be made to the layout at the east end of the station to allow terminating trains from Bristol to run straight into Platform 6.

operates regular intercity services from Taunton to London Paddington with trains running almost every half an hour during peak hours and every hour during off peak hours. They also operate the sleeper service from Penzance to London.

The high speed service from continues to Exeter St Davids then either Paignton or Plymouth and Penzance. These services usually run via Westbury but some operate via Bristol. They also run an hourly service from Taunton to Bristol and Cardiff. [cite web |title = National Rail Timetable 134 (Winter 2007)|publisher= Network Rail|url = http://www.networkrail.co.uk/browse%20documents/eNRT/Dec07/timetables/Table134.pdf|format=]

Other services that call at Taunton on a less frequent basis include:
* Special shuttle services between Taunton and Bishops Lydeard in connection with special events on the . These are operated by or another main line operator.
* The "" steam-hauled service from Bristol and Weston-super-Mare to Kingswear on summer weekends.

A marshalling yard was opened to the west of the station on . It was used for many years by the ' Civil Engineer and was home to a Ruston and Hornsby diesel shunter, PWM652. After the end of this permanent way work the sidings were little used, mainly being a place to store unwanted wagons.

During 2006 they were relaid and in January 2007 were returned to use. Fairwater is now the home for a High Output Track Renewal System. This is engaged on renewal of track on the west of Swindon , the Reading to Exeter Main Line and the . The equipment based in the yard is a High Output Ballast Cleaner, a High Output Track Renewal Train, and smaller on-track plant. [cite journal | title = Taunton: high output base | journal = Modern Railways | volume = 64 | issue = 703 | pages = 20 | publisher = Ian Allan Publishing | date = April 2007 | id = ISSN 0026-8356] Trains are mainly worked by Freightliner locomotives and Bo-Bo 73133 is used as the yard shunter.