The Poplar Hawk-moth (Laothoe populi) is a moth of the family Sphingidae. It is found throughout the Palearctic region and the Near East and is one of the most common members of the family in the region.[2]

This is a large (wingspan 70–100 mm), rather odd-looking, species, usually light grey marked with darker grey fascia but with the greys occasionally replaced by buffish tones (this form is more frequent among females than males). Its slightly peculiar appearance is mainly due to its habit of resting with its hindwings held further forward than (but still half hidden by) the forewings (the species lacks a frenulum joining the wings together). It is said to look like a cluster of dead leaves of the main host, poplar. When disturbed, the moth will suddenly reveal a bright orange-red patch on the hindwing, possibly as a distraction or startle display. Gynandromorphs, half female and half male, are common.[2] 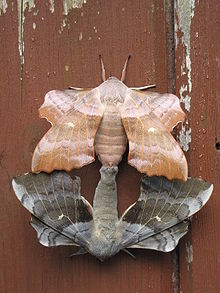 One or two broods are produced each year and adults can be seen from May to September. The adults do not feed. The species overwinters as a pupa.

The egg is large, spherical, pale green, and glossy, and is laid singly or in pairs on the underside of leaves of the host plant.[2] Females lay up to 200 eggs. 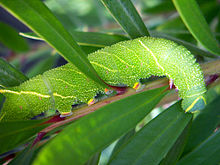 On first hatching the larva is pale green with small yellow tubercules and a cream-coloured tail horn. Later, it develops yellow diagonal stripes on its sides, and pink spiracles. Individuals feeding on willows may become quite heavily spotted with red. Others are more bluish white with cream stripes and tubercules. They are stout bodied, and grow to 65–85 mm.[2]

The larva pupates in an earthen cell 2–3 cm below the surface, near its host plant. It has a short cremaster.[2]

Although they emerge late at night or early in the morning, the species flies starting from the second night and is strongly attracted to light. The proboscis is non-functional, so they do not feed as adults.[2]

It feeds mainly on poplar and aspen but sometimes on willow, alder, apple, birch, elm, oak and ash. The food plant often depends on location.[2]