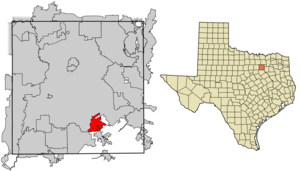 There were 927 households out of which 35.6% had children under the age of 18 living with them, 47.6% were married couples living together, 18.7% had a female householder with no husband present, and 27.9% were non-families. 23.7% of all households were made up of individuals and 7.4% had someone living alone who was 65 years of age or older. The average household size was 2.91 and the average family size was 3.43.

Most of Hutchins is served by the . Small portions are in the .

Most of Hutchins was served by the . The took over all of WHISD for the 2005-2006 school year. WHISD closed shortly afterwards, with official termination in Spring 2006. After the closure of WHISD property values in the district increased. [" [http://www.accessmylibrary.com/coms2/summary_0286-31429319_ITM W-H property values increase: Schools' negative publicity had scared development, some say.] ." "". , .]

For the 2005-2006 school year and onwards, the W-H ISD portion of Hutchins is served by several schools located in Dallas. They include Bushman, U. Lee, Starks, Weiss, and Young Elementary Schools (in four separate attendance zones), Hulcy and Zumwalt Middle Schools (in two separate zones), and Carter High School and (in two separate attendance zones). The zoning will remain the same for the subsequent school year.