For other uses, see Diagoras 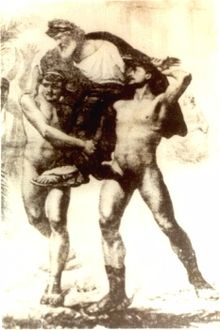 Diagoras of Rhodes carried in the stadium by his two sons

Diagoras of Rhodes (Διαγόρας ὁ Ῥόδιος) was an ancient Greek boxer from the 5th century BC, who was celebrated for his own victories, as well as the victories of his sons and grandsons. He was a member of the Eratidae family at Ialysus in Rhodes. He descended from Damagetus, king of Ialysus, and, on the mother's side, from the Messenian hero, Aristomenes. Diagoras was victor in boxing twice in the Olympic games, four times in the Isthmian, twice in the Nemean, and once at least in the Pythian Games. The fame of Diagoras and his descendants was celebrated by Pindar (Olympian Odes VII). A local soccer club, Diagoras F.C. and the Rhodes International Airport, "Diagoras", are named after him.

His three sons were Olympic champions. The oldest son, Damágētos, won the pankration in 452 and 448 BC. Akousílaos, the second son, won the boxing in 448 BC. The two celebrated their victory by carrying their father around the stadion on their shoulders, cheered loudly by the spectators. This was considered the peak of happiness that a human being could experience, achieving great glory and yet having this glory matched or even surpassed by one's own children. Legend has it that during Diagoras' triumphant ovation on the shoulders of his sons, a spectator shouted:

the meaning being that although he attained godlike bliss, he could not possibly become a god. Indeed Diagoras died on the spot, and was since considered the very happiest mortal that ever lived. His youngest son, Dorieús, was even more successful than his brothers.

According to another legend revived by Pausanias,[1] Diagoras' daughter, Kallipáteira ("she of the beautiful father") was the only lay woman to enter the Olympic Games. Excepting the priestess of Demeter, all women were banned from watching because athletes performed in the nude. Kallipateira's son, Peisírrhodos, as well as her nephew, Euklēs, had won the Olympic Games too, when she decided to sneak into the crowd, disguised as a man. She was discovered and brought before the Hellanodíkai (Judges of the Hellenes) to be tried for sacrilege on pain of death; there she proclaimed that if any woman could ever be allowed to defy the ban, it was she, having had a father, three brothers, a son and a nephew achieve victory eight times there. The judges were awed, and she was acquitted. However, according to Pausanias, a law was passed that future trainers should strip before entering the arena. Legend has it that Chilon of Sparta also died of joy the day when his son gained the prize for boxing at the Olympic games,