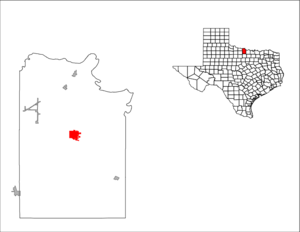 Henrietta is a city in Clay County, , . It is part of the Metropolitan Statistical Area. It is the of Clay CountyGR|6. The population was 3,264 at the 2000 census.

Clay County was separated from Cooke County (along with Montague County) in 1857 and Henrietta was named as the county seat. The naming of the town remains a mystery though several explanations have been offered. However it was named, it became the center of gravity for the fledgling county. By 1860, it remained the only town in the county, having 109 residents, 10 houses, and a general store. It sat at the far western edge of Anglo expansion in north central Texas, but Native Americans remained a viable threat to current and future settlers. In 1862, Henrietta opened its post office. The Civil War saw American soldiers leave all of the south, and Henrietta again suffered from continuous attacks from local tribes. By late 1862, Henrietta was abandoned, as white settlers fled back east to Cooke and Montague counties. Remaining structures were burned. Anglos continued to attempt resettlement, and in 1865 after the Civil War, a group attempting resettlement was massacred. A Quaker group again attempted to reoccupy the former townsite but they were killed or fled. In 1870, 50 soldiers and Kiowa Indians fought a battle in the ruins of Henrietta.

After the battle, white settlers returned to Henrietta, this time permanently. In 1874, the town's post office reopened and Henrietta quickly became the economic hub of north central Texas. In 1882, the reached Henrietta on its southern side, and in 1887 it became the western most terminus for the . The line was later extended to Wichita Falls after heavy lobbying by Wichita Falls businessmen. Henrietta became a logistical supply point for various operations in north central Texas, including mining in Foard and Archer counties. The Southwestern Railway Company completed a rail line between and Henrietta in 1910.

Henrietta, though it had settlers off and on since 1857, did not incorporate until 1881. The Clay County courthouse was built in 1884, which is still in use today. By 1890, the population had reached 2100, and the town boasted a 400-seat opera house, five churches, a new jailhouse, and a school. From 1893 to 1895, it even had a college - Henrietta Normal College. It remained the economic hub of the county at the turn of the 20th century.

But Henrietta's growth would wane in the 20th century as nearby Wichita Falls grew rapidly into the most prosperous economic center in the area. The Southwestern Railway line was abandoned in 1920, and the line was abandoned in 1969. By 1990, the population remained under 3000. In 2000, it topped 3000 for the first time since the 1970 census. It remains a "bedroom community" for Wichita Falls today. It also remains the largest city in Clay County.

The play "Texas" shown at Palo Duro Canyon near is loosely based on the history of Henrietta.

There were 1,308 households out of which 33.3% had children under the age of 18 living with them, 55.4% were married couples living together, 9.8% had a female householder with no husband present, and 31.7% were non-families. 29.1% of all households were made up of individuals and 17.5% had someone living alone who was 65 years of age or older. The average household size was 2.43 and the average family size was 3.01.

The City of Henrietta is served by the . South of town between Henrietta and Jacksboro, students attend .