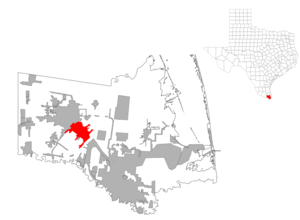 San Benito is a city in Cameron County, , U.S., The population was 25,005 at the 2006 census. It is the birthplace of Country and Tex-Mex music icon . San Benito celebrated the 100th anniversary of the naming of the city April 3, 2007. The post office was named Diaz from April to May 1907. The San Benito Museum, Freddy Fender Museum and Conjunto Music Museum opened in the same building Nov. 17, 2007.

San Benito is part of the Brownsville&ndash;Harlingen Metropolitan Statistical Area.

San Benito was first a village named Diaz, after , president of Mexico. Following the arrival of the railroad in 1904 and irrigation in 1906, Anglo settlers began moving to San Benito and the rest of the Rio Grande Valley. The Diaz post office (Sam Robertson, Postmaster) operated April 2, 1907 until May 11, 1907 when it became San Benito. A September 1898 postcard from Diaz with only a Houston train postmark exists prompting speculation that Diaz existed as a village ten + years prior to Diaz/San Benito founding in 1907. Another Diaz Post Office in (SE corner TX panhandle @ Oklahoma border) was proposed 25 Oct 1904 but never opened. The order was rescinded 31 Dec 1904.

There were 7,065 households out of which 41.4% had children under the age of 18 living with them, 56.6% were married couples living together, 19.5% had a female householder with no husband present, and 19.1% were non-families. 16.8% of all households were made up of individuals and 10.7% had someone living alone who was 65 years of age or older. The average household size was 3.30 and the average family size was 3.72.

San Benito, Texas, is known as the "Resaca City." A resaca, four hundred feet wide, flows through the city. As indicated by its Spanish name, the resaca was a dry river bed. It is now the main canal of a large irrigation system.

San Benito was at first named "Diaz" in honor of Porfirio Diaz, president of México at that time. The people in the San Benito area were predominantly of Mexican ancestry. The Anglo settlers came after the completion of the first irrigation system in 1906. Prior to that time, this region was an arid, mesquite-cactus-brush covered wilderness. Irrigation water touched off the crop production magic in the railroad.

On July 4, 1904, the first passenger train arrived at Diaz. To celebrate the coming of the new railroad, the community leaders renamed the railroad station "Bessie," in honor of Bessie Yoakum. Her father, B.F. Yoakum, was instrumental in the construction of the railroad.

Some time later, when the townsite was surveyed, the name was changed to "San Benito" in honor of Benjamin Hicks. He was a pioneer ranchman whose charitable attitude endeared him to the population. The name was suggested by Rafael Moreno, the popular 90 year old camp cook of the surveying party. Moreno suggested the name "San Benito" for his beloved "Saint Benjamin" Hicks.

San Benito was a village with a moderate number of homes, businesses, churches, and public schools several years before they were incorporated in 1911. The original map of the townsite was recorded April 28, 1907. The first school was established in 1907 with 48 pupils and Miss Kate Purvis as the teacher. The Post Office was also opened in 1907. In 1927 the city adopted a Commission form of government operating under a Home Rule Charter.

The irrigation district was organized in 1906. As a result of the availability of irrigation water, San Benito and all of the Lower Rio Grande Valley cities came to serve a newly developing agricultural territory.

The original townsite, created in 1911, contained 1,280 acres. Since then a series of annexations have increased the incorporated area to 4,092.17 acres.

The mild winter climate in southmost section of the United States has played a dominant role in the growth of San Benito and the other cities of the Lower Rio Grande Valley. Crops grow and flowers bloom year-round. The city has become a hotspot for winter tourists and retired people, providing a substantial percentage of the buying power of this community.

In addition, serves San Benito and many nearby communities by providing several magnet schools. (Med Tech) is located in San Benito.