A bird atlas is an ornithological work that attempts to provide information on the distribution, abundance, long-term change as well as seasonal patterns of bird occurrence and usually represented in the form of maps. They often involve the use of large numbers of volunteers who help cover a large geographic region and the methods used are standardized so that the studies can be continued in the future and ensure comparison of results over time. In many cases the species covered are restricted to those that breed or are resident. Migration atlases on the other hand cover migratory birds and usually consist of maps showing summaries of ringing and recoveries.[1] 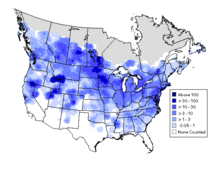 There is no single definition of a bird atlas, however they always involve spatial (locations) and temporal (time) components. A typical bird atlas project collates data on bird presence or abundance with mapping of this information over a significant geographical region over a well-defined period of time. Other kinds of data gathering efforts such as breeding bird surveys may also sometimes be considered as atlas projects.[1]

The earliest published mapping of biodiversity in the form of an atlas was completed for the flora of Britain - Atlas of the British Flora (1962)[2] The first bird atlas, the Atlas of breeding birds of the West Midlands, covered Staffordshire, Warwickshire and Worcestershire and was published by Collins for the West Midland Bird Club, in 1970.,[3] It built on work done by the Club and its subsequent president, Tony Norris, for its West Midland Bird Distribution Survey, circulated privately in 1951,[4] which mapped frequency of sightings and breeding densities against districts based on the boundaries of Rural District Councils.[4][5]

The West Midlands atlas influenced and was followed by the 1976 Atlas of Breeding Birds in Britain and Ireland.[6][7] In the decades that followed a number of atlases have been made all over the world and by 2008 atlases had summarised as many as 27.9 million records of birds gathered by at least 108000 contributors, over an area covering roughly 31.4% of the world's land.[1] While early atlases focused on merely presence or absence of species, and their breeding, there is an increasing trend towards those that indicate abundance or relative abundance.[8]

In the oldest and most popular sampling approach, the region to be covered is gridded and volunteers are expected to visit representative locations within each grid cell and provide information that is collated. Often the method of collecting data, time and season in which to obtain the sample information are pre-decided as part of a protocol. In some cases birds that are found to be breeding are recorded, others may use point sampling or transects within the grid cells to obtain quantitative estimates of abundance.[1] In some countries the grid cells follow the latitudes and longitudes - cell intervals of 1 degree, 30 and 15 minutes are often chosen for convenience. In higher latitudes where such an approaches leads to grid cells with large differences in area, sizes are more often fixed using grid distances of 1, 2, 5, 10 or even 50 km grid intervals.[9] A disadvantage with grids is that boundaries rarely match those of habitats, making them unsuitable for ecological studies.[7] Another problem is that the data collected in one project cannot be readily reused with new grid alignments that may be needed for instance when combining information with other projects. Repeat atlases made after a decade or two have helped in identifying long term range changes.[10]

Another approach that does not need pre-defined grids makes use of the coordinates of individual points. Coordinates may be determined from maps or using GPS devices, and the point densities can be interpolated to generate grid or contour maps. The Summer Atlas of North American Birds (1995) is one such example that makes use of such point data (not using grids) collected by the North American Breeding Bird Surveys and Christmas bird counts.[11] Others such as the EPOQ atlas for Quebec in Canada use 'trip lists', lists of birds seen at a place on a trip.[12] A problem in atlas projects is the unequal distribution of available observers with some grids having very few visits. Such problems are often corrected for observer effort. In order to obtain a quantitative indicator, 'reporting rate' is sometimes used, although this requires multiple visits or samples to arrive at.[9] 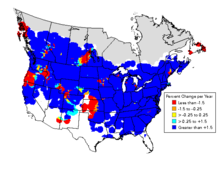 Some authors note the distinction between the published "atlas" (usually a book but sometimes are web based systems) and the actual atlas data. The data itself cannot be recovered back from published atlases for alternate applications. Depending on the methodology used, there can be multiple applications for atlas data.[7]

Atlases at a minimum, have an educational and recreational value. They provide information on the current distributions of birds and may be used by birdwatchers to assess the importance of their own observation records, know more about species or to plan trips. Distribution maps in atlases are usually far more accurate than those in field guides.[7]

Atlases document distributions and populations for conservation and research. Species distribution ranges are important in assessing conservation criteria. Patterns of sympatry and allopatry are better observed when measures of relative abundance are also collected.[13] When atlas projects are repeated over time it is possible to note changes in distribution. Reasons for change may be sought to identify causes when these changes are significant. Ecological niche models may be built to identify factors that are significant in influencing the occurrence of species. Many studies have examined the distributions of rare species and have noted that they often do not occur in species-rich areas.[14] Studies using atlas data have helped in identifying key sites for conservation.[15] Atlas data has also been used to identify biogeographic zones.[16]

Atlases have helped in resolving taxonomic problems. DNA studies had shown that the two 'subspecies' of Eupodotis afra were distinct. The southern African atlas was able to demonstrate that these two 'subspecies' were disjunct in distribution except for a small area of overlap. The earlier distribution maps (made using what has been termed the 'shade-the-triangle' method) were totally misleading.[10]

Atlas projects can involve several countries. The South African bird atlas project (SABAP) was started in 1986 with data gathered from six countries: Botswana, Lesotho, Namibia, South Africa, Swaziland and Zimbabwe. This resulted in a published book form atlas in 1997 [17] and the database held seven million distribution records. It has been used by planners, conservationists, researchers and for ecotourism apart from being used in over fifty research papers and eight academic dissertations.[18]

Bird atlases can also serve as a guide for more detailed research. Atlas data can be used to develop sampling and survey designs for intensive studies.[7]