Martensville is a city located in Saskatchewan, Canada, just 8 kilometers (5.0 mi) north of Saskatoon, and 14 kilometers (8.7 mi) south west of Clarkboro Ferry which crosses the South Saskatchewan River. Martensville is one of the fastest growing communities in Saskatchewan,[2] with the population growing 25% between 1996 and 2001. It is sometimes considered a bedroom community of Saskatoon. It is surrounded by the Rural Municipality of Corman Park No. 344.

In 1939, Isaac and Dave Martens purchased land north of Saskatoon. They then sold three small parcels of land to people who wanted to move out of Saskatoon and, as a result, the community of Martensville was created.

According to the mayor of Martensville, the population of the Martensville, as of March 2006, was 5,120[2] which is roughly the same as that of the city of Humboldt and considerably more than the city of Melville whose population has dropped below 5,000 over the last decade. The 2006 census reported a population growth of 13.8 per cent since 2001 placing the town at a population of 4,968.[4] On September 4, 2009, the provincial government announced that Martensville would be granted city status in November 2009.[1][5][6][7]

The 2011 edition of the official Saskatchewan government road map lists populations of its cities; according to it (but without citing source for the figure), Martensville's population was 6,035 as of the date the map was printed. 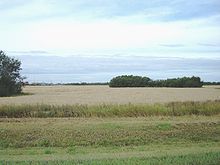 Patches of Aspen trees surrounded by wheat fields in the summer.

Martensville is in a dry-prairie/savanna biome and experiences warm summers and very cold winters. Martensville has four distinct seasons. Average temperatures range from -17°C in January to 18°C in July.[13] Martensville is fairly dry; with the summer being the wettest season. It belongs to the continental climate region of Canada which typifies warm summers according to the Köppen climate classification.[10]:95 The geology of the area are sandy plains which resulted from shorelines of glacial lakes and depositions from glacial lakes as the Laurentide ice sheet left the area. There are no large lakes in this area due to the sandy soils which drained away melting glacial waters. The lakes in this area are remnants of the South Saskatchewan river channels.[10]:94

Martensville has a mayor as the highest ranking government official. They also elects aldermen or councillors to form the municipal council. Gordon Rutten is the current mayor. He also holds the distinction of being the first mayor of the city of Martensville.[14]

Provincially Martensville is within the Martensville constituency served by their MLA who is currently Nancy Heppner.[15]

Martensville is represented in the Canadian House of Commons by MP of the Saskatoon—Wanuskewin riding, currently this is Maurice Vellacott.

The city does not have its own police service and is in contract with the Royal Canadian Mounted Police for protective services along with Corman Park Police Service and the Saskatoon Police Service who provide additional assistance when needed.

Martensville received its first school in 1953. Martensville is served by two elementary schools and one high school in the Prairie Spirit School Division.[16] Valley Manor Elementary School [17] is located on the south side of Martensville, while Venture Heights Elementary School [18] and the Martensville High School [19] are both located on the north side. Each school has an enrollment of approximately four hundred students each. In the spring of 2008, CA$ 698,000 was allocated for portable classrooms at Valley Manor and Venture Heights Schools.[20]

The city has seven lakes that are connected through a series of canals. The lakes and creeks are part of the Opimihaw Creek system. The lakes were created for water retention but are also used for a variety of year round recreational activities including perch fishing, canoeing, and skating.

The city has a new outdoor pool facility that opened in the summer of 2010. The facility includes a six lane junior olympic sized pool, a zero depth entry pool, and a toddler pool. There are four waterslides and several spray features. It has a full service concession and is right next to the community centre.

Wanuskewin Heritage Park, a Provincial Heritage Property and interpretive centre is located 5 miles (8.0 km) from Martensville and the Sutherland Bird Sanctuary is within 10 miles (16 km).[11]

See the article on Saskatoon for additional regional points of interest shared with Martensville.

Martensville holds its annual Buster Days festival every June, usually in the first or second week. Buster Days is a 3 day festival that includes a parade, dances, softball, and, as of 2005, a volleyball tournament. Before 2005, a small exhibition took place that offered amusement rides, games, and food. Otherwise, its close proximity to Saskatoon - in particular the Credit Union Centre arena - allows residents easy access to that city's events and attractions.

The city used to have a small golf course, but in May 2008 it was demolished to make way for new houses and a public swimming pool. Martensville's bowling alley was also closed in 2008, and replaced by a gym in late 2009. In the summer of 2008, the former bowling alley was used as a filming location for the second season of the Canadian television show, Rabbit Falls.[25]

Martensville is the only Saskatchewan city without a full hospital; the closest are the St. Paul's and City hospitals in Saskatoon.

Martensville is currently serviced by a recently launched monthly newspaper, The Martensville Messenger.[26] Otherwise it shares other print, radio and television media with its neighbour, Saskatoon. It is the only Saskatchewan city that currently does not have a radio station.