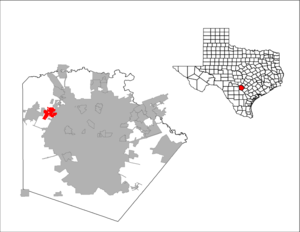 According to anthropologists, the area was occupied seasonally from about 5,000 B.C. by small bands of migrant Indians in search of food and game

In 1858, a Scottish immigrant, Dr. George Marnoch, purchased the land that would later become the site of the town. Marnoch's home at one time served as a stop and a for s driving their cattle from Bandera to auction in San Antonio.

played an important role in the heritage of Helotes. The local Indians planted corn, actually , in the fertile valleys of the area, and feed corn was a major crop grown in the 19th and early 20th centuries. The town name is derived from the Spanish word "helote", which means "green ," but exactly how the town came to be called Helotes is still a subject of debate

As the of San Antonio expanded and approached the outskirts of Helotes in the 1970s, residents determined to take their fate into their own hands. After a decade of planning and negotiation, Helotes became an incorporated city in October 1981

Helotes was the hometown of the late Texas state Senator , who perished after his home on the south side of San Antonio caught fire on November 24, 2006.

There were 1,471 households out of which 40.2% had children under the age of 18 living with them, 79.9% were married couples living together, 5.4% had a female householder with no husband present, and 12.2% were non-families. 10.6% of all households were made up of individuals and 4.5% had someone living alone who was 65 years of age or older. The average household size was 2.91 and the average family size was 3.13.

Helotes residents are zoned to schools in the . They are:

Celebrities Who Have Performed at Floore's Country Store