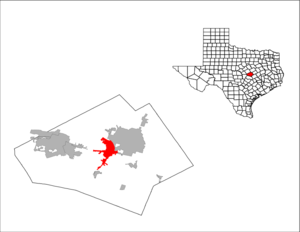 Belton is part of the Killeen&ndash;Temple&ndash; Metropolitan Statistical Area.

Belton is just south of Temple and north of Salado on .

There were 4,742 households out of which 37.3% had children under the age of 18 living with them, 49.9% were married couples living together, 16.1% had a female householder with no husband present, and 30.0% were non-families. 24.6% of all households were made up of individuals and 10.6% had someone living alone who was 65 years of age or older. The average household size was 2.69 and the average family size was 3.23.

The City of Belton is served by the .Here is the list of schools:

The is located in Belton and is the home of the team.

For recreation, Belton has two major lakes: and . There is also a water park, [http://www.summerfunwaterpark.com Summer Fun Water Park] . Another notable recreation point is [http://www.hoodmwr.com/lake_activities.htm BLORA] which is part of Ft. Hood and is located on Lake Belton

Actor grew up in Belton. He graduated from Belton High School in 1985.

Alternative rock band is from Belton.

Musician of classic rock's was born in Belton in 1962.

Rapper/Producer hails from Belton and has a tattoo of the iconic Belton Water Tower on his right arm.

, the basis of a famous article by , was a Belton native.

and was born in Belton and is buried beside his first wife, Nita Stewart Haley, in the Moffat Cemetery. However, he spent most of his life in Midland and Canyon in .

Home of the housed in the Bell County Expo Center.