Maynardville is a city in and the county seat of Union County[3], Tennessee, United States. Its population was 1,782 at the 2000 census. It is included in the Knoxville, Tennessee Metropolitan Statistical Area.

Maynardville was the birthplace of country music singers Roy Acuff and Carl Smith. 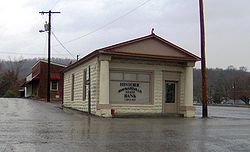 What is now Maynardville began in the early 19th century as a small community known as Liberty. When Union County was created in the 1850s, Liberty, being nearest the center of the county, was chosen as the county seat. The land for the courthouse square was donated by Marcus Monroe (1793–1870), a local minister.[4]

Shortly after the Tennessee General Assembly passed legislation authorizing the creation of Union County, Knox County secured an injunction blocking the creation of the new county, which would take some of its area from Knox County. To defend the new county, its supporters retained the services of Horace Maynard (1814–1882), a Knoxville-area attorney and later U.S. Postmaster General. After Maynard successfully defended the new county in litigation proceedings, Liberty was renamed "Maynardville" in his honor.[5][6] Union County was formally recognized in 1856.[7]

Country music singer Roy Acuff was born in Maynardville in 1903. The Acuff family had been well-established in Union County since the mid-19th century. When Goodspeed published its History of Tennessee in 1887, the Union County section included a brief biography of Roy's grandfather, Coram Acuff (1846–1931), who represented Union County in the state legislature.[8][9] Other notable country musicians born in the Maynardville vicinity include Carl Smith, Chet Atkins, and Kenny Chesney, the latter two having been born in nearby Luttrell.

Maynardville is centered around a stretch of TN 33, which connects the city to the suburbs of north Knoxville to the southwest and Tazewell to the northeast. TN 61 intersects (and briefly merges with) TN-33 approximately 5 miles (8.0 km) east of Maynardville, and TN 144 intersects TN 33 to the west.

According to the United States Census Bureau, the city has a total area of 5.4 square miles (14 km2), all land. 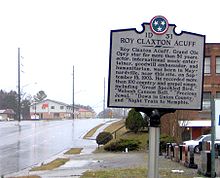 There were 683 households out of which 37.0% had children under the age of 18 living with them, 49.9% were married couples living together, 14.9% had a female householder with no husband present, and 32.1% were non-families. 28.8% of all households were made up of individuals and 10.8% had someone living alone who was 65 years of age or older. The average household size was 2.46 and the average family size was 3.03.

In the 2009 film Inglourious Basterds, the character of 1 SSF First Lieutenant Aldo Raine, portrayed by Brad Pitt, is said to be a moonshiner from Maynardville.[11]