The Burghers are a Eurasian ethnic group, historically from Sri Lanka, consisting for the most part of male-line descendants of European colonists from the 16th to 20th centuries (mostly Portuguese, Dutch, German and British) and local women, with some minorities of Swedish, Norwegian, French and Irish.

Today the mother tongue of the Burghers is English, but historically other languages were spoken by the community, in particular the Sri Lanka Indo-Portuguese, a creole language based on Portuguese, Tamil, and Sinhala.[citation needed]

In the census of 1981, the Burgher population of Sri Lanka was enumerated at 39,374 persons, about 0.2% of the total population. The highest concentration of Burghers is in Colombo (0.72%) and Gampaha (0.5%). There are also similar, significant communities in Trincomalee and Batticaloa, with an estimated population of 20,000.

Burgher descendants are spread far and wide into many communities throughout the world. Families with surnames such as Furnandes (a variation of the Portuguese Fernandes), Mirano and Vandort are of Dutch ancestry.

The Burghers were legally defined by law in 1883, by the Chief Justice of Ceylon, Sir Richard Ottley, given before the Commission, appointed in connection with the establishment of a legislative council in Ceylon. It was determined that Burghers were defined as those whose father was born in Sri Lanka, with at least one European ancestor on one's direct paternal side, regardless of the ethnic origin of one's mother, or what other ethnic groups may be found on the father's side. Because of this definition, Burghers almost always have European surnames (mostly of Portuguese, Dutch and British origin, but some are of German, French or Russian origin). 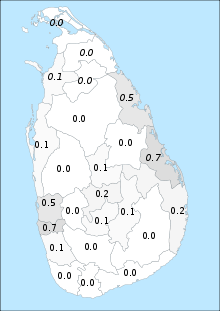 The Portuguese arrived in 1505 in what outsiders then called Ceylon. Since there were no women in the Portuguese navy, the Portuguese sailors married local Sinhalese women and Tamils in Batticaloa. This practice of intermarriage with local people was encouraged by the Portuguese.

During the Dutch period, all Dutch colonial operations were overseen by the VOC, ('Vereenigde Oost-Indische Compagnie' (VOC) or United East India Company). Virtually all Burghers from this period were employees of the VOC. The VOC employed not only Dutch nationals, but also enlisted men from the Southern Netherlands, the German states, Sweden, Denmark and Austria. It is therefore not unusual to find ancestors from these countries in many Dutch Burgher family trees.

The term 'Burgher' comes from the Dutch/German word burger, meaning "citizen" or "town dweller", and is cognate with the French and English word "bourgeois". At this time in Europe, there had emerged a middle class, consisting of people who were neither aristocrats nor serfs. These were the traders and businessmen, who lived in towns and were considered free citizens. In Europe, they were called burghers, and they were encouraged to migrate to the colonies in order to expand business horizons.

Dutch Ceylon had two classes of people of European descent: those who were paid by the VOC and were referred to as Company servants (i.e. employees), and those who had migrated of their own free will to carry out their trade. The latter were not referred to as burghers in Ceylon, but rather by their rank, position or standing in Ceylon.

During British colonial rule, they were referred to by the British as 'Dutch Burghers' and formed the European-descended civilian population in Ceylon. To some degree the term of Burgher was used in a derogatory way to divide and conquer the population, as it distinguished between British and other races or positions throughout the island. The 'Dutch Burgher' community took pride in its own achievements and wanted to acknowledge and hold onto their European ancestry. A number of Dutch Burgher Union journals have been created over a period of time, to record family histories. They were not only of Dutch origin but rather incorporated European (Dutch, German, Hungarian, Italian, French, Swedish etc.), United Kingdom, Portuguese Mix, Tamil and Sinhalese lines.

When the British took over in 1796, many VOC employees chose to leave. However, a significant number chose to stay, mostly those of mixed descent. Some chose to go to Batavia, which was the headquarters of the VOC. Reportedly about 900 families, both free citizens and United East India Company employees, decided to remain in Ceylon. The British referred to them all as 'Dutch Burghers'. One condition of their being allowed to stay was that they had to sign a Treaty of Capitulation to the British. Many 'Dutch Burghers' can find their ancestors' names in this treaty. At the time of the British conquest, the 900 'Dutch Burgher' families residing in Ceylon were concentrated in Colombo, Galle, Matara and Jaffna.

The Burghers were also seen to include members of the Swiss de Meuron Regiment, a mercenary unit employed by the VOC. In diplomatic negotiations in Europe, Count de Meuron pledged allegiance to the British in exchange for back pay and information. This allowed the British to get detailed fortification information and reduce the fighting strength of Ceylon prior to 1796. The de Meuron Regiment refused to fight the Dutch due to relationships forged on the island of Ceylon and South Africa. Post 1796 members of the de Meuron Regiment stayed in Ceylon, whilst the regiment itself went off to fight and distinguish itself in India and later in Canada.

Until the early 1900s, many Burghers spoke English and a form of Portuguese Creole, even those of Dutch descent. Portuguese Creole had been the language of trade and communication with indigenous peoples. It is now only spoken in parts of the coastal towns of Trincomalee and Batticaloa. While much vocabulary is from Portuguese, its grammar is based on that of Tamil and Sinhalese.

Burgher culture is a rich mixture of East and West, reflecting their ancestry. They are the most westernised of the ethnic groups in Sri Lanka. Most of them wear western clothing, although it is not uncommon for a man to be seen wearing a sarong, or for a woman to wear a sari.

A number of elements in Burgher culture have become part of the cultures of other ethnic groups in Sri Lanka. For example, baila music, which has its origin in the music of 16th century Portugal, has found its way into mainstream popular Sinhalese music. Lacemaking, which began as a domestic pastime of Burgher women, is now a part of Sinhalese culture too. Even certain foods, such as love cake, bol fiado (layered cake), ijzer koekjes, frikkadels (savoury meatballs) and lamprais, have become an integral part of Sri Lankan national cuisine.

Burghers have a very strong interest in their family histories. Many old Burgher families kept stamboeken (from the Dutch for "Clan Books"). These recorded not only dates of births, marriages and deaths, but also significant events in the history of a family, such as details of moving house, illnesses, school records, and even major family disputes. An extensive, multi-volume stamboek of many family lineages is kept by the Dutch Burgher Union.

Individual families often have traditions reflecting their specific family origins. Burghers of Dutch origin sometimes celebrate the Feast of Saint Nicholas in December, and those of Portuguese-Jewish origin observe customs such as the separation time of a woman after childbirth (see Leviticus 12:2-5), the redemption of the Firstborn (Pidyon ha-Ben), and the purification bath (taharah) after a daughter’s first period (see niddah). Most of the latter Burgher families, being unaware of the Jewish origins of these customs, have given them a Catholic slant. (Catholic and Episcopal churches had services for the churching of women after childbirth from ancient times.)

However, some traditions attributed to Judaism can also be explained as borrowings or retention from the Tamil and Sinhalese communities with whom many Burgher families also share ancestry and culture. For example, the purification bath after a girl’s first period is a common cultural feature of the Tamil and Sinhalese communities of Sri Lanka and neighboring India. Hence its prevalence amongst some Burghers families of Sri Lanka is not necessarily of Jewish origins.

Some commentators believe that the Burghers own mixed backgrounds have made their culture more tolerant and open. While inter-communal strife has been a feature of modern Sri Lankan life, some Burghers have worked to maintain good relations with other ethnic groups. However, prejudices within the community as a result of a condescending attitude outside of it, have caused some migrant Burghers to take on the traditions of the country in which they reside and disconnect from the ties to their country afterwords.

In 2001 the Burghers established a heritage association, the Burgher Association, with headquarters at No.393, Union Place, Colombo 2 Sri Lanka.

The maintenance of stamboeks, or genealogical stem-books, was noted above. Because of known errors and omissions, these should be used as a starting point for researchers. They should seek data by cross-referencing other available material.

Today, websites such as Roots Web and Sri Lankan Burgher family genealogies can be accessed electronically. Thus many family genealogies can be looked up. Interestingly, Family#1001 gives the lineage of Don Simon de Liveras, de Sarams and others who assimilated with the Bandaranaike family. Family #1261 is the last entry so far, for the Potger family. Other options, such as the International Ceylon Database [1], provides a comprehensive source whilst respecting privacy of living individuals or family feuds.