Dreghorn
Not to be confused with Dreghorn Barracks.

Dreghorn is a village near Irvine, North Ayrshire, Scotland. This parish comprehends the old parishes of Dreghorn and Pearston, which were united in 1668. The whole of the parish was historically the property of the De Morvilles, who were Constables of Scotland and Lords of Cunninghame. [1]

Dreghorn is the birthplace of John Boyd Dunlop, inventor of the pneumatic tyre Dreghorn is believed to be Britain's oldest continuously inhabited village after the remains of an ancient settlement were uncovered by builders.[2] Including the remnants of a 5,500-year-old well (one of only five to be found in Scotland) dating back to around 3500BC. Although other neolithic villages have been abandoned in Scotland, e.g. Skara Brae, Dreghorn is thought to be the only village in Britain with a continual unbroken residence [3] During the development of new housing, a large prehistoric site was discovered to the North of the current Main Street, suggesting that there has been a settlement in Dreghorn for at least 5000 years[4] making it the oldest continuously inhabited village in Britain.

The name Dreghorn may derive from hunting terminology and speaks a little bit about the character of the typical Dreghorn hunter. After a good long hunting session would follow a good long drinking session, where they would fill their hunting horns with ale and drink even the dregs! Another theory is that it's an old Scots name meaning 'farm at the bog',[5] or as in early charters, the name was written Dregern; and it probably derived from the British Tre-quern, which signifies the town or habitation by the swamp, or by the alder-trees.[6]

Maid Morvilles mound was located to the left of the bridge over the Irvine, commemorating the tragic drowning of a member of this family who were the overlords of the baillerie of Cunninghame. It was destroyed by the earthworks of the expressway. A 'Maid Morville Avenue' still exists to commemorate the event. Locally the mound was known as 'Marble Hill', a corruption of 'Morville's Hill'. There is also a 'Marble Avenue' nearby.

Dreghorn Station, at the foot of Station Brae by the River Annick, closed in 1964 and carried trains between Irvine and Kilmarnock. The railway is now a public footpath and woodland.

The Church of Scotland 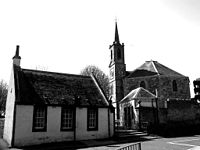 The unusual octagonal Kirk of Dreghorn

The village boasts a rather unusual parish church, now called Dreghorn and Springside Parish Church (Formerly Dreghorn and Perceton). It is built in the shape of an octagon and is often referred to the 'Thrup'ny Bit' after pre-decimal three penny coin.[7]. The building, completed in 1780, was sponsored by on of the Earls of Eglinton who brought the idea for the design back from the Continent of Europe. He and his family are buried in the church's graveyard. The session house at the gate of the church was previously the church's mortuary. [8] St. Michael's church in Teignmouth, South Devon is another example of this rare church design.

There were at least two other Christian places of worship on this site, and at the uniting of the Parishes of Dreghorn and Perceton, the church owned the land surrounding the church (called a glebe). A current circular cul-de-sac called The Glebe commemorates this fact.[9]

Opposite the village's primary school, stood the Dreghorn Congregational Church.

This Gospel Hall is situation next to the Dreghorn Primary School on Main Street and is now the only non-conformist church in Dreghorn.

Dreghorn's historical main industries were farming and coal mining. All of the coal mines around Dreghorn were closed during by the early 1980s. Dreghorn is still surrounded on two sides by farm land. The new communities of Broomlands and Bourtreehill cover the sites of some former mines.