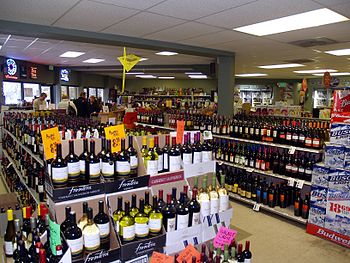 The interior of a liquor store in Breckenridge, Colorado.

In the United States, Australia and Canada, a liquor store is a type of store that specializes in the sale of alcoholic beverages. In South Africa and Namibia these stores are generally called bottle stores.

In Alabama, Connecticut, Georgia, and Massachusetts, liquor stores are also technically known as “package stores” because purchased liquor must be packaged in a sealed container or bag when it is taken from the store.[1]

In the United Kingdom and Ireland the corresponding term is "off-licence," or "offie" for short, which refers to the fact that alcohol may be bought on the premises but must be consumed off the premises. Almost all supermarkets, grocery stores, and petrol stations have an off-licence.

Note: All Nordic countries, except Denmark, have government-owned alcohol monopolies. 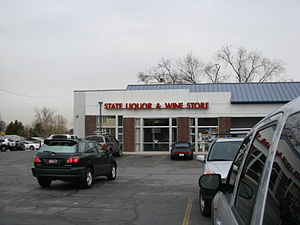 Some states in the United States operate their own retail stores for the sale of certain types of alcohol, such as this state-run liquor store in Cottonwood Heights, Utah.

The Bunghole, a liquor store in Salem, Massachusetts.
Further information: List of alcohol laws of the United States by state

The Twenty-first Amendment of the United States Constitution allows states to regulate the sale and consumption of alcoholic beverages.[2] State regulations vary widely. The majority of the U.S. states have laws specifying which alcoholic beverages must be sold in specialty liquor stores and which may be sold in other venues.

In eighteen alcoholic beverage control states, the specialty liquor stores are owned and operated exclusively by the state government.

In five states (Colorado, Kansas, Minnesota, Oklahoma, and Utah), only low-point beer may be sold in supermarkets or gas stations.

In some states (e.g., California, Louisiana, Missouri, Nevada, New Mexico, and Wisconsin), all alcoholic beverages can be sold practically anywhere, including drug stores and gas stations.