VMF-323 was commissioned August 1, 1943 at Marine Corps Air Station Cherry Point, North Carolina. According to oral history, the squadron got its name from three fighter pilots who killed a 6-foot rattlesnake and hung its skin in the squadron's ready room. VMF-323 began training in F4U Corsairs almost immediately for combat in the Pacific theater of World War II. Much of the new squadron's training was done at Marine Corps Air Station El Centro and Marine Corps Air Station Camp Pendleton, California. In July 1944, the Death Rattlers departed for the Pacific aboard the USS Long Island. For the next nine months, VMF-323 flew training missions from secure island bases in the South Pacific.

After the war, the Death Rattlers were based at Marine Corps Air Station El Toro, where they conducted training exercises. It was around this time that the squadron appeared in the 1949 movie Sands of Iwo Jima.

When the Korean War began in 1950, VMF-323 began combat operations from the USS Badoeng Strait as part of Marine Aircraft Group 33 (MAG-33), supporting ground forces in the Battle of Pusan Perimeter, Battle of Inchon, Battle of Chosin Reservoir and almost every other major campaign of the conflict. During action near Kosong, on August 11, 1950, a VMF-323 Corsair pilot became the first Marine aviator killed in Korea.[1] The unit also took part in the attack on the Sui-ho Dam in June 1952. 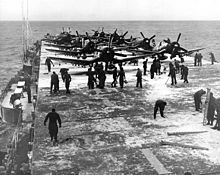 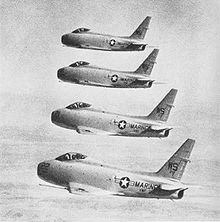 The squadron was re-designated Marine Attack Squadron 323 (VMA-323) in June, 1952. The Death Rattlers left Korea in July 1953. Once back home, the squadron began flying the F9F Panther and then the F9F Cougar, a swept-wing version of the Panther. In 1956 the squadron adopted the FJ-4 Fury, with which it deployed to the western Pacific in 1957.[2] That year, the Death Rattlers flew armed patrols over the Quemoy and Matsu islands to support Chinese nationalist forces.

Returning to MCAS El Toro in 1959, the squadron switched to the F8U Crusader and were assigned to the USS Oriskany.

In 1964 the squadron returned to MCAS Cherry Point, where they received their present designation of Marine Fighter Attack Squadron 323 (VMFA-323). This same year, the Death Rattlers began flying the F-4 Phantom II. During the Dominican Crisis in 1965, the Death Rattlers provided air cover while American citizens were evacuated.

As the United States grew closer to war in South Vietnam, the Death Rattlers deployed to Da Nang Air Base beginning on October 25, 1965. Combat operations started the day after they arrived. The squadron lost its first aircraft a week after they arrived when the squadron's executive officer was shot down by a Surface-to-air missile over North Vietnam. It was the only Marine F-4 felled by a SAM during the war.[3] 323 remained in Vietnam until 1969, flying combat sorties from Da Nang and Chu Lai. 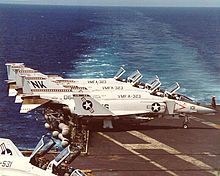 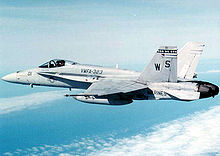 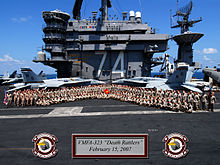 On September 14, 1982, VMFA-323 transitioned to its current aircraft, the F/A-18 Hornet. In October 1985, the squadron deployed again aboard the USS Coral Sea (CV-43), this time to the Mediterranean Sea. In spring of 1986 during Freedom of Navigation exercises held in international waters and airspace off the coast of Libya. Later on April 15, 1986 provided SAM suppression and fighter Combat Air Patrol (CAP) sorties during Operation El Dorado Canyon.