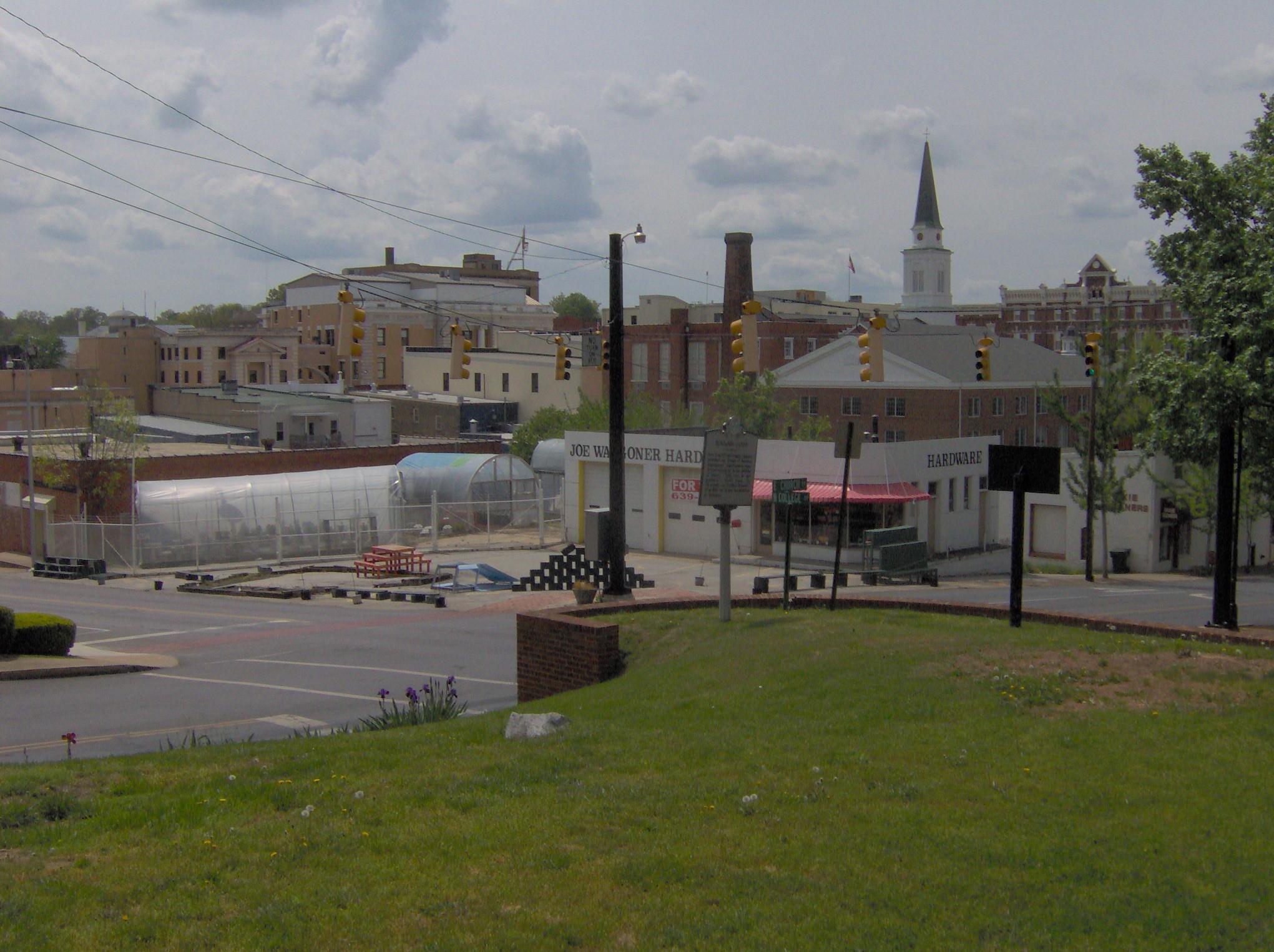 Greeneville is a town in Greene County, , . The population was 15,198 at the 2000 census. It is the of Greene CountyGR|6. The town was named in honor of hero . Incidentally, it is the only town with this spelling in the , although there are numerous U.S. towns named "Greenville". The town was the capital of the short-lived in the 18th-century history of the Tennessee region.

Greeneville is notable as the town where President (1808-1875) began his political career when elected from his trade as a tailor. He and his family lived there most of his adult years (except for his residency in political service in capitals). It was an area of strong abolitionist and Unionist views and yeomen farmers, an environment which influenced Johnson's outlook.

The "Los Angeles"-class submarine USS "Greeneville" (SSN-772) was named in honor of this city.

The town officially hosts the baseball club of the , (though the club actually plays in nearby Tusculum).

Native Americans were hunting and camping in the Nolichucky Valley as early as the period (c. 10,000 B.C.). A substantial (1000 B.C. - 1000 A.D.) village existed at the Nolichucky's confluence with Big Limestone Creek (now part of ). [Samuel Smith, "Historical Background and Archaeological Testing of the Davy Crockett Birthplace State Historic Area, Greene County, Tennessee" (Nashville, Tenn.: Tennessee Division of Archaeology, 1980), 3.] By the time the first Euro-American settlers arrived in the area in the late 1700s, the claimed the valley as part of their hunting grounds. The passed just northwest of modern Greeneville, and the townsite is believed to have once been the juncture of two lesser Native American trails. [Richard Doughty, "Greeneville: One Hundred Year Portrait (1775-1875)" (Kingsport Press, 1974), 3.]

Permanent European settlement of Greene County began in 1772. Jacob Brown, a North Carolina merchant, leased a large stretch of land from the Cherokee, located between the upper Lick Creek watershed and the Nolichucky River, in what is now the northeastern corner of the county. The "Nolichucky Settlement" initially aligned itself with the as part of Washington County, North Carolina. After voting irregularities in a local election, however, an early Nolichucky settler named Daniel Kennedy (1750-1802) led a movement to form a separate county, which was granted in 1783.

The county was named for Nathanael Greene, reflecting the loyalties of the numerous Revolutionary War veterans who settled in the Nolichucky Valley, especially from and . The first county court sessions were held at the home of Robert Kerr, who lived at "Big Spring" (near the center of modern Greeneville). Kerr donated convert|50|acre|km2 for the establishment of the county seat, most of which was located in the area currently bounded by Irish, College, Church, and Summer streets. "Greeneville" was officially recognized as a town in 1786. [Doughty, 11-13.]

Greeneville and the State of Franklin

In 1784, North Carolina attempted to resolve its debts by giving the U.S. Congress its lands west of the Appalachian Mountains, including Greene County. In response, delegates from Greene County and neighboring counties convened at Jonesborough and resolved to break away from North Carolina and establish an independent state. The delegates agreed to meet at Greeneville later that year to form a constitution. [Doughty, 15-16.]

The constitutional convention for what would become known as the State of Franklin (after ) was held in a crude log courthouse in Greeneville. Reverend Samuel Houston (not to be confused with the later governor of Tennessee and Texas) presented a draft that restricted the election of lawyers and other professionals. Houston's draft met staunch opposition, especially from Reverend Hezekiah Balch (1741-1810), who was later instrumental in the creation of Tusculum College. The delegates instead chose a constitution similar to North Carolina's. was elected governor, and Greeneville was named the permanent capital. The delegates submitted a petition for statehood the following year, which failed to gain the requisite votes needed for admission to the Union. The Franklin movement began to collapse shortly thereafter. [Doughty, 15-17.]

In 1897, at the Tennessee Centennial Exposition in Nashville, a log house that had been moved from Greeneville was displayed as the capitol where the State of Franklin's delegates met in the 1780s. There is, however, nothing to verify that this building was the actual capitol. In the 1960s, the capitol was reconstructed, based largely on the dimensions given in historian J.G.M. Ramsey's "Annals of Tennessee". [Doughty, 17-19.]

Greeneville and the abolitionist movement

Greene County, like much of East Tennessee, was home to a strong movement in the early 1800s. This movement was likely influenced by the relatively large numbers of who migrated to the region from Pennsylvania in the 1790s. The Quakers considered slavery to be in violation of Biblical Scripture, and were active in the region's abolitionist movement throughout the antebellum period. [Doughty, 43.] One such Quaker was (1782-1820), who published the nation's first abolitionlist newspaper, "The Emancipator", at nearby Jonesborough.

When Embree's untimely death in 1820 effectively ended publication of "The Emancipator", several of Embree's supporters turned to abolitionist (1789-1839), who had started publication of his own antislavery newspaper, "The Genius of Universal Emancipation", in 1821. Anticipating that a southern-based abolitionist movement would be more effective, Lundy purchased Embree's printing press and moved to Greeneville in 1822. Lundy remained in Greeneville for two years before moving to Baltimore. He would later prove influential in the career of , whom he hired as an associate editor in 1829. [Tara Mitchell Mielnik, " [http://tennesseeencyclopedia.net/imagegallery.php?EntryID=L056 Benjamin Lundy] ." "The Tennessee Encyclopedia of History and Culture", 2002. Retrieved: 3 June 2008.] [Doughty, 44-46.]

Greenevillians involved in the abolitionist movement included Hezekiah Balch, who freed his slaves at the Greene County Courthouse in 1807. , the founder of , followed in 1818. Valentine Sevier (1780-1854), a nephew of who served as Greene County Court Clerk, freed his slaves in the 1830s and offered to pay for their passage to , which had been formed as a colony for freed slaves. Francis McCorkle, the pastor of Greeneville's Presbyterian Church, was a leading member of the Manumission Society of Tennessee. [Doughty, 43-47.]

Andrew Johnson (1808-1875), the 17th President of the United States, spent much of his active life in Greeneville. In 1826, Johnson arrived in Greeneville after fleeing an apprenticeship in . Johnson chose to remain in Greeneville after learning that the town's was planning to retire. Johnson purchased the tailor shop, which he moved from Main Street to its present location at the corner of Depot and College streets. Johnson married a local girl, Eliza McCardle, in 1827. The two were married by Mordecai Lincoln (1778-1851), who was Greene County's Justice of the Peace. He was a cousin of , whom Johnson would serve as Vice President. [Doughty, 59-60.] [ [http://www.nps.gov/anjo/forteachers/curriculummaterials.htm Andrew Johnson National Historic Site - Curriculum Materials] . Retrieved: 3 June 2008.]

In the late 1820s, a local artisan named Blackstone McDannel often stopped by Johnson's tailor shop to debate issues of the day, especially the , which Johnson opposed. Johnson and McDannel decided to debate the issue publicly. The interest sparked by this debate led Johnson, McDannel, and several others to form a local debate society. The experience and influence Johnson gained in debating local issues helped him get elected to the Greeneville City Council in 1829. He was elected mayor of Greeneville in 1834, although he resigned after just a few months in office to pursue a position in the Tennessee state legislature, which he attained the following year. As Johnson rose through the ranks of political office in state and national government, he used his influence to help Greeneville constituents obtain government positions, among them his long-time supporter, Sam Milligan, who was appointed to the Court of Claims in Washington, D.C. [Doughty, 59-73.]

The , located in Greeneville, was listed on the in 1963. Contributing properties include Johnson's tailor shop at the corner of Depot Street and College Street. The site also maintains Johnson's house on Main Street and the (atop Monument Hill to the south). A replica of Johnson's birth home and a life-size statue of Johnson have been placed across the street from the visitor center and tailor shop.

There were 6,641 households out of which 25.5% had children under the age of 18 living with them, 44.6% were married couples living together, 13.9% had a female householder with no husband present, and 38.3% were non-families. 34.5% of all households were made up of individuals and 16.1% had someone living alone who was 65 years of age or older. The average household size was 2.18 and the average family size was 2.78.

The Greene County Fair is recognized statewide as one of the best of its size. In 2005, it received the Tennessee Association of Fairs highest award, the “Champion of Champions” fair trophy. In 2004 and 2001, it was named the AAA division Champion Fair in the state of Tennessee. In 1994 and 2000, it was named 1st Runner-Up for the Champion Fair in the AAA Division, and in 1988, received award for Most Outstanding Fair in Tennessee.

There has been a fair in some form in Greene County since 1870 when the Farmers and Mechanics Association held its first exposition. The present Greene County Fair Association was incorporated in 1949. The Fair exists on the support of countless volunteers, board members and officers since 1949.