The D50 is a 6.1 megapixel entry-level digital single-lens reflex camera, sold from June 2005 till November 2006 by Nikon. It was Nikon's first DSLR aimed at the consumer market, and sold for $899 USD. It uses the Nikon F mount. The D50 was succeeded by the Nikon D40 in November 2006.

It has a 23.7 mm by 15.6 mm DX format image sensor with 6.1 million effective pixels. It also has a 2.0" (50 mm) polysilicon TFT LCD with 130,000 pixels. The camera uses a through-the-lens full-aperture exposure metering system. It can simultaneously record NEF and JPEG data to a Secure Digital storage device. Like its newer, higher-end sibling (the D80), the D50 uses Secure Digital instead of CompactFlash cards found on previous Nikon digital SLRs. The camera is powered by a rechargeable lithium-ion battery which is claimed to be able to take up to 2,000 shots on a single charge. The camera is compatible with PictBridge printers and can shoot 2.5 frames per second in continuous mode. The camera's dimensions are 133 mm in width, 102 mm in height, and 76 mm in depth.[1]

The D50 is the only entry-level Nikon DSLR to have the autofocus motor ('screw drive') built into the camera body where the camera is backwards-compatible with mechanical autofocus lenses (Nikkor AF series) dating back to 1989. This feature has been eliminated on later entry-level models and is currently only available on mid-range and advanced models. This makes the D50 the lightest Nikon DSLR to have the autofocus motor.

This camera has many settings that can only be accessed by selecting a detailed menu view. One such feature is the ability to shoot HDRI photographs. The camera refers to this setting as BKT (Bracketed Set). 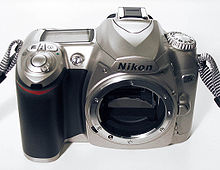 The website Digital Photography Review rated the D50 highly and noted its improved noise performance over the D70s it was largely derived from, although it had fewer hobbyist features (making the D50 the first de-specified entry-level DSLR camera thus lowering the MSRP) and a lower price than the D70s.[3] In depth testing by the Images Resources website and the October 2005 "Hoshi Nabi" (Star Navigator) Magazine[4], indicated that the D50 achieved its low noise through exceptionally good performance at the sensor level. Testing by Roger Clark confirmed that the D50 had higher gain and lower noise than the D70.[5] Tests of the D50 at all ISO levels indicated that it did offer low noise without loss of contrast or detail.[6]