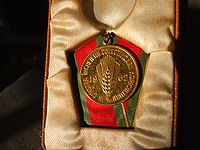 Medal granted in 1962 at the completion of collectivization in Romania

The collectivization of agriculture in Romania took place in the early years of the Communist regime. The initiative sought to bring about a thorough transformation in the property regime and organisation of labour in agriculture. According to some authors, such as US anthropologist David Kideckel, the collectivization was a "response to the objective circumstances" in postwar Romania, rather than an ideologically-motivated enterprise.[1] Unlike the Stalinist model applied in the Soviet Union in the 1930s, the collectivization was not achieved by mass liquidation of wealthy peasants, starvation or agricultural sabotage, but was accomplished gradually, without significant violence or destruction.[2]

The programme was launched at the plenary of the Central Committee of the Romanian Workers' Party of 3–5 March 1949, where a resolution regarding socialist transformation of agriculture was adopted along the lines of the Soviet kolkhoz. The collectivization strategy covered two directions: model collective structures were set up, such as Gospodării Agricole Colective (GAC; Collective Agricultural Institutions) and Gospodării Agricole de Stat (GAS; State Agricultural Institutions), aimed at attracting peasants; and the full propaganda system (newspapers, radio, mobile caravans, brochures, direct action by agitators) was put in motion in order to convince peasants to form collective farming units.

The initial collectivization drive was accompanied by an intensification of the class struggle in the villages, indeed through the elimination of some wealthy peasants (chiaburi, also referred to by the Russian term kulaks); some members of this class were intimidated, beaten, arrested and imprisoned, on the grounds that they had employed the labour of poor peasants to work their land.

Violent means were also used against poor or "mid-level" peasants and in general against all those who refused to sign up willingly for tillage associations (întovărăşiri) or join the collective. Much attention was devoted to involving members of the rural elite (teachers, priests, well-off peasants), who often had to choose between GAC and prison under an accusation of sabotage. Peasants entered a GAC not only with their land, but also their buildings (barns, villas, warehouses), farm vehicles and tools, carts and working animals. Collectivization was accompanied by peasant revolts that broke out when brutal "arguments" were employed as a means of persuasion by the party, and also due to abusive measures such as obligatory quotas taking away part of the production of individual plots (while GAC that had already been set up were excused from such requirements).

Militia and Securitate troops quelled the revolts, the leaders of which were arrested and harshly punished. According to data supplied by the Communist authorities, 50,000 peasants were arrested and imprisoned, many of them being tried publicly and sentenced to long prison terms.

A warning against the use of violent means in the process of collectivization was issued by Communist leader Gheorghe Gheorghiu-Dej in 1951. Moreover, after the marginalization of Ana Pauker and Vasile Luca, he accused the two of instigating provocative measures and "trampling on the free consent by the peasants" during the process. In 1961 the Romanian leader also condemned the large number of public trials against peasants "in the name of the struggle against Kulaks" during the first phase of collectivization.[3]

The progress was slow at first, Romania lagging behind all Eastern bloc countries in 1952, however in 1957 the party decided to accelerate the process.[4] The speed up has been attributed by Kenneth Jowitt to Romania's leadership desire to prove its independence from the Soviet Union, whose leader at the time, Nikita Khrushchev, opposed the program.[5] At an extraordinary session of the Great National Assembly held between 27 and 30 April 1962, General Secretary Gheorghe Gheorghiu-Dej announced the end of the collectivization programme; 96% of the country's arable surface and 93.4% of its agricultural land had been included in collective structures. At the same session, he criticized the "Muscovite faction" of the Romanian Communist Party

In the assessment of historian Stan Stoica, collectivization seriously harmed the Romanian village: he cites the loss of "independence, dignity and identity" by the peasants; a decline in the rural population that accelerated when young people migrated to the cities (forced industrialization was going on at the same time); and the fact that families were "wrecked" by poverty, while interest in work plummeted.[6]