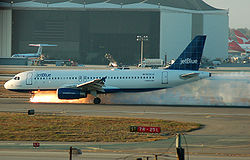 An emergency landing is a landing made by an aircraft in response to a crisis which either interferes with the operation of the aircraft or involves sudden medical emergencies necessitating diversion to the nearest airport.

If there is no engine power available during a forced landing, a fixed-wing aircraft glides, while a rotary winged aircraft (helicopter) autorotates to the ground by trading altitude for airspeed to maintain control. Pilots often practice "simulated forced landings", in which an engine failure is simulated and the pilot has to get the aircraft on the ground safely, by selecting a landing area and then gliding the aircraft at its best gliding speed.

If there is a suitable landing spot within the aircraft's gliding or autorotation distance, an unplanned landing will often result in no injuries or significant damage to the aircraft, since powered aircraft generally use little or no power when they are landing. Light aircraft can often land safely on fields, roads, or gravel river banks (or on the water, if they are float-equipped); but medium and heavy aircraft generally require long, prepared runway surfaces because of their heavier weight and higher landing speeds. Glider pilots routinely land away from their base and so most cross-country pilots are in current practice.

Since 2003, research has been conducted on enabling UAVs to perform a forced landing autonomously. [1]

Large airliners have multiple engines and redundant systems, so forced landings are extremely rare for them, but some notable ones have occurred. A famous example is the Gimli Glider, an Air Canada Boeing 767 that ran out of fuel and glided to a safe landing in Gimli, Manitoba, Canada on July 23, 1983. On June 1982, British Airways Flight 9, a Boeing 747 en route from Kuala Lumpur to Perth lost power in all four engines, three of which subsequently recovered, eventually diverting to Jakarta. On April 28, 1988, Aloha Airlines Flight 243 experienced an explosive decompression mid-flight, forcing an emergency landing at the Kahului Airport with only one casualty, flight attendant Clarabell "C.B." Lansing. More recently, Air Transat Flight 236 ran out of fuel over the Atlantic Ocean on August 24, 2001 and made a successful forced landing in the Azores. On November 1, 2011 a Boeing 767 LOT Polish Airlines Flight 016 made a belly landing after a central hydraulic system failure at Warsaw, Poland's Frederic Chopin International Airport, with no injuries.[2]

A less successful crash landing involved Southern Airways Flight 242 on April 4, 1977. The DC-9 lost both of its engines due to hail and heavy rain in a thunderstorm and, unable to glide to an airport, made a forced landing on a highway near New Hope, Georgia, United States. The plane made a hard landing and was still carrying a large amount of fuel, so it burst into flames, killing the majority of the passengers and several people on the ground.

Airliners frequently make emergency landings, and almost all of them are uneventful. However because of their inherent uncertain nature, they can quickly become crash landings or worse. Some notable instances include Swissair Flight 111, which crashed near Halifax, Nova Scotia, Canada on September 2, 1998 while dumping fuel in preparation for a precautionary landing due to fire; United Airlines Flight 232, which broke up while landing at Sioux City, Iowa, U.S.A. on July 19, 1989; and Air Canada Flight 797, which burned after landing at Cincinnati/Northern Kentucky International Airport on June 2, 1983 after a fire started in the cabin.

US Airways Flight 1549 after ditching in the Hudson River

Several passenger and cargo aircraft and helicopter ditchings have been documented. These intentional emergency water landings are the result of an in-flight fuel depletion or mechanical malfunction and not an accidental overshoot of a runway or an uncontrolled crash into a body of water. The following figures show survival rates for passengers and crew:

605 of 871 occupants of the above listed ditchings survived. A lot of passengers weren't killed by the impact but drowned because of hypothermia or panic. The average survival rate of the accidents listed above is 69%.