Manon Lescaut is an opera in four acts by Giacomo Puccini. The story is based on the 1731 novel L’histoire du chevalier des Grieux et de Manon Lescaut by the Abbé Prévost.

The libretto is in Italian. It was somehow cobbled together by five librettists whom Puccini employed (or went through): Ruggero Leoncavallo, Marco Praga, Giuseppe Giacosa, Domenico Oliva and Luigi Illica. The publisher, Giulio Ricordi, and the composer himself also contributed to the libretto. So confused was the authorship of the libretto that no one was credited on the title page of the original score.

Puccini took some musical elements in Manon Lescaut from earlier works he had written. For example, the madrigal Sulla vetta tu del monte from Act II echoes the Agnus Dei from his 1880 Messa a quattro voci. Other elements of Manon Lescaut come from his compositions for strings: the quartet Crisantemi (January 1890), three Menuets (probably 1884)[1] and a Scherzo (1883?). The love theme comes from the aria Mentia l'avviso (1883). 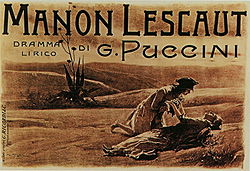 Puccini's publisher, Ricordi, had been against any project based on Prévost's story, because Massenet had already made it into a successful opera, Manon, in 1884. While Puccini and Ricordi may not have known it, the French composer, Daniel Auber, had also already written an opera on the same subject with the title, Manon Lescaut, in 1856.

Despite all the warnings, Puccini proceeded. "Manon is a heroine I believe in and therefore she cannot fail to win the hearts of the public. Why shouldn’t there be two operas about Manon? A woman like Manon can have more than one lover." He added, "Massenet feels it as a Frenchman, with powder and minuets. I shall feel it as an Italian, with a desperate passion."[2][3]

The first performance of Manon Lescaut took place in the Teatro Regio in Turin in 1893. Manon Lescaut was Puccini's third opera and his first great success. 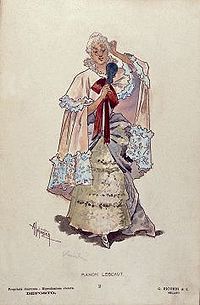 Manon's costume for Act II designed by Adolf Hohenstein for the world premiere.

A public square near the Paris Gate

It is evening, and a crowd of male students and girls are strolling about a square known for drinking and gaming. Edmondo sings a song of youthful pleasure (Edmondo, chorus: Ave, sera gentile).

Des Grieux overhears their conversation: Manon is on her way to a convent, following the instructions of her father. Des Grieux approaches her and begs her to meet him later; she reluctantly agrees. The students laugh, pointing at the pair. After Manon leaves, Des Grieux sings of his feelings for her (Des Grieux: Donna non vidi mai).

Lescaut returns with Geronte, who also is captivated by Manon, saying she will only be wasted upon a convent. While Lescaut is playing cards with group of students, Geronte arranges to abduct Manon and take her to Paris (Edmondo, chorus, Geronte, Lescaut: La tua ventura ci rassicura); (Edmondo, Des Grieux: Cavaliere, te la fanno!). Edmund overhears the plan and informs Des Grieux. He advises him to accompany Manon in the carriage arranged by Geronte (Des Grieux, Manon: Vedete? Io son fedele alla parola mia). Des Grieux declares his love to Manon and persuades her to go to Paris with him. They leave together. Geronte and Lescaut arrive on the scene as they disappear, and Lescaut proposes that they follow the carriage to Paris. (Geronte, Edmondo, Lescaut, chorus: Di sedur la sorellina e il momento!)

A room in Geronte's house in Paris

Set design for Act II by Ugo Gheduzzi for the world premiere performance. 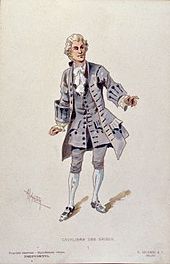 (Puccini omits the part of the novel in which Manon and Des Grieux live together for a while, then Manon leaves Des Grieux because his money runs out.)

The act begins with Manon as Geronte's mistress. Manon and her hairdresser are in the room when her brother, Lescaut, enters (Manon, Lescaut: Dispettosetto questo riccio!); (Lescaut: Sei splendida e lucente!). She tells him that Geronte is too old and wicked; he bores her. Manon is sad, and her thoughts turn to Des Grieux (Manon: In quelle trine morbide); (Lescaut, Manon: Poiché tu vuoi saper).

Lescaut is upset knowing that his sister is not happy living with Geronte, and he goes to find Des Grieux. Des Grieux appears in Geronte’s house (Manon, Des Grieux: Oh, sarò la più bella! – This love's own magic spell). As they renew their vows of love, Geronte returns unexpectedly. He salutes them ironically, reminding Manon of his many favors to her. She replies that she cannot love him (Geronte, Des Grieux, Manon: Affè, madamigella).

Bowing low, he leaves them. The lovers rejoice in their freedom (Manon, Des Grieux: Ah! Ah! Liberi!). Lescaut urges them to leave the house at once, but Manon hesitates at the thought of leaving her jewels and pretty frocks. Again, Lescaut enters in breathless haste, making signs that they must depart immediately. Manon snatches up her jewels, and they go to the door. It is locked by Geronte's order. Soldiers appear to arrest Manon, who, in trying to escape, drops the jewels at Geronte's feet. She is dragged off, and Des Grieux is not permitted to follow her (Des Grieux, Manon, Lescaut, sergeant, Geronte: Lescaut! – Tu qui?).

(Intermezzo: The journey to Le Havre.)

After trying everything to release Manon from the prison but to no avail, Des Grieux goes to Le Havre.

A square near the harbor in Le Havre

Set design for Act III by Ugo Gheduzzi for the world premiere performance.

It is dawn. Manon is in prison with other courtesans (Des Grieux, Lescaut, Manon: Ansia eterna, crudel). Lescaut has bribed a prison guard to let Des Grieux speak with Manon. By talking to her through the bars, they learn that she is to be deported to Louisiana. A lamp lighter passes, singing a song while extinguishes the lights (Lamplighter, Des Grieux, Manon: E Kate ripose al re); (Des Grieux, Manon: Manon, disperato è il mio prego).

They attempt a rescue, but in vain. The guard appears, escorting a group of women, who are going on the same ship as Manon. She walks among them, pale and sad. The crowd makes brutal comments during the roll call of the courtesans (Chorus, Lescaut, Des Grieux, Manon: All'armi! All'armi!) but Lescaut inspires pity for Manon (Sergeant, chorus, Lescaut, manon, Des Grieux: Rosetta! – Eh, che aria!)

Des Grieux, in despair at the idea of being separated from Manon forever, goes to Manon's side. He tries to seize her but is roughly pushed away by the sergeant. However the captain of the ship sees his intense grief (Des Grieux: Pazzo son!) and allows him to board the ship.

A vast plain near the outskirts of the New Orleans territory

The act begins with the lovers are making their way across the desert hoping to find protection in a British settlement. Wandering in the desert without any water, the ailing Manon is exhausted. She falls and can’t go any farther (Des Grieux, Manon: Tutta su me ti posa) ; (Des Grieux: Vedi, son io che piango) ; (Manon, Des Grieux: Sei tu che piangi).

Des Grieux is alarmed by Manon's appearance and goes to look for water. While he is gone, Manon recalls her past, muses about her fatal beauty and her fate (Manon: Sola, perduta, abbandonata).