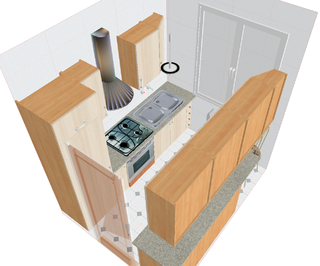 Computer-aided architectural design (CAAD) software programs are the repository of accurate and comprehensive records of buildings and are used by architects and architectural companies.

The first program was installed back in the 1960’s, to help architects save time instead of drawing their blueprints. Computer-aided design also known as CAD was originally the type of program that architects used, but since CAD couldn’t offer all the tools that architects needed to complete a project, CAAD developed as a distinct class of software.

All CAD and CAAD systems employ a database with geometric and other properties of objects; they all have some kind of graphic user interface to manipulate a visual representation rather than the database; and they are all more or less concerned with assembling designs from standard and non-standard pieces. Currently, the main distinction which causes one to speak of CAAD rather than CAD lies in the domain knowledge (architecture-specific objects, techniques, data, and process support) embedded in the system. A CAAD system differs from other CAD systems in two respects:

In a more general sense, CAAD also refers to the use of any computational technique in the field of architectural design other than by means of architecture-specific software. For example, software which is specifically developed for the computer animation industry (e.g. Maya and 3DStudio Max), is also used in architectural design. The exact distinction of what properly belongs to CAAD is not always clear. Specialized software, for example for calculating structures by means of the finite element method, is used in architectural design and in that sense may fall under CAAD. On the other hand, such software is seldom used to create new designs.

In 1974 Caad became a current word and was a common topic of commercial modernization.

CAAD has two types of structures in its program. The first system is surface structure which provides a graphics medium to represent three dimensional objects using two dimensional representations. Also algorithms that allow the generation of patterns and their analysis using programmed criteria, and data banks that store information about the problem at hand and the standards and regulations that applies to it. The second system is deep structure which means that the operations performed by the computer have natural limitations. Computer hardware and machine languages that are supported by these make it easy to perform arithmetical operations quickly and accurately. Also almost an illogical number of layers of symbolic processing can be built enabling the functionalities that are found at the surface.

Another advantage to CAAD is the two way mapping of activities and functionalities.NOS. The two instances of mapping are indicated to be between the surface structures (TM1) and the deep structures (TM2). These mappings are abstractions that are introduced in order to discuss the process of design and deployment of CAAD systems. In designing the systems the system developers usually consider TM1. Here a one-to-one mapping is the typical statement, which is to develop a computer based functionality that maps as closely as possible into a corresponding manual design activity, for example, drafting of stairs, checking spatial conflict between building systems, and generating perspectives from orthogonal views. The architectural design processes tend to integrate models isolated so far. Many different kinds of expert knowledge, tools, visualization techniques, and media are to be combined. The design process covers the complete life cycle of the building. The areas that are covered are construction, operations, reorganization, as well as destruction. Considering the shared use of digital design tools and the exchange of information and knowledge between designers and across different projects, we speak of a design continuum.

An architect’s work involves mostly visually represented data. Problems are often outlined and dealt with in a graphical approach. Only this form of expression serves as a basis for work and discussion. Therefore, the designer should have a maximum visual control over the processes taking place with in the design continuum. Further questions occur about navigation, associative information access, programming and communication with in very large data sets.

Several organisations are active in education and research in CAAD: