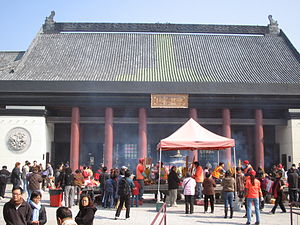 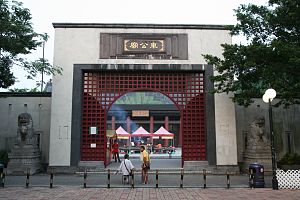 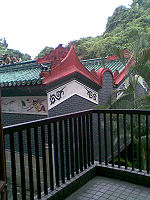 Che Kung Miu (Chinese: 車公廟; pinyin: Chēgōng Miào), also called Che Kung Temple, are the temples for Che Kung (車公), who was a general during the Southern Song Dynasty (1127-1279) in ancient China. He is believed by some worshipers to have been involved in the attempt to keep the Song state alive by bringing Prince Ping and his brother to the South.[1] There are two temples dedicated to Che Kung in Hong Kong: one in Sha Tin and one in Ho Chung.[2][3] Other temples in Hong Kong are partly dedicated to Che Kung.

The Che Kung Miu near Tai Wai, in Sha Tin District, New Territories, is the most famous one in Hong Kong. During the second and the third days of Lunar New Year, thousands of people go to this temple to worship, including many local Hong Kong government officials. This temple, on Che Kung Miu Road, is located midway between Tai Wai and Che Kung Temple stations of the MTR.[4][5]

The original temple was first built at the end of the Ming Dynasty (1368-1644) and was renovated 1890,[4] 1993 and 2004. The external walls are now plastered with false brick lines and the roofs with green glazed ceramic tiles. The recent renovation is considered to have "very much diminished the authenticity of temple".[6] Due to the high number of worshipers during the Che Kung Festival following the Lunar New Year, a new temple was built in 1994 in front of the original one.[4] The original temple has been preserved in-situ; it is only occasionally open to the public.[6] It is classified as a Grade II historic building[7] since 1987.[6]

The current Che Kung temple, in Japanese-style,[8] was built in 1993-1994 at a cost of HK$48 million.[4] It is eight times the size of the old one.[6] The main hall contains a giant statue of Che Kung. Next to it is a fan-bladed wheel of fortune, which, worshippers believe, will bring good luck when turned three times. Fortune-tellers can be found within the temple.[5]

The temple is administered by the Chinese Temples Committee since 1936.[6] Admission to the temple is free, but it is customary for visitors to donate money to support the maintenance of the temple. Its opening hours are 7:00am to 6:00pm daily.[4] 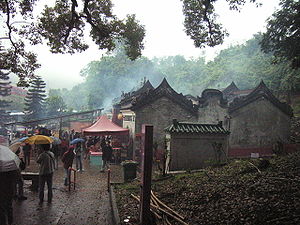 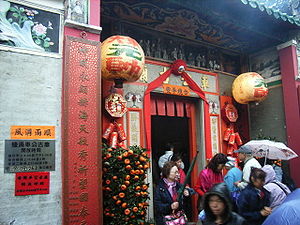 Situated on the banks of the Ho Chung River,[9] and half a mile from Ho Chung Village (蠔涌) of Sai Kung District,[10] the temple is one of the oldest in Hong Kong. Initially built in the mid-16th century, the temple predates its popular counterpart near Tai Wai in Sha Tin. The present temple structure probably dates largely from 1878, while the temple furniture probably dates from the Xianfeng era (1850-1861).[10]

It is great place to be for Chinese New Year, as the spirit of Che Kung is celebrated alongside memories of family members that have passed to the next life.

Run by villagers for over 300 years, the temple is now being kept by Wan Sai Cheung of the Wan family[citation needed] who have been residents in Ho Chung village for many generations. It is listed as a Grade II historic building[7] since 1996.[3] The temple has been renovated several times. It is considered that "the authenticity [of the building] is in general kept". Known renovation dates include 1908, 1994 and 2002,[3] while other sources also mention 1934 and 2000.[10]

Other temples in Hong Kong are partly dedicated to Che Kung. These include: