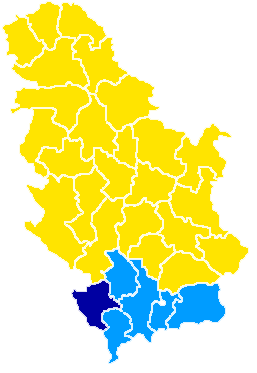 The Serbian government had passed through weeks of severe crisis after the of its southern province of on . Its stability, however, was also tested and questioned before, being comprised by two very different political currents. Kosovo's independence was gradually recognized by the and numerous countries, leading to strain in their relations with Serbia. Prime Minister of the (DSS) offered in late February to the (DS), which holds governmental majority, a restructuring of the governmental contract including an annex according to which Serbia can continue European exclusively with Kosovo as its integral part. The controversy was further heated up when , the for , offered to continue negotiations with Serbia. President of the DS responded that European integrations of Serbia cannot be questioned by anyone or anything, and that since the province of Kosovo-Metohija is written into the constitution, meaning that the proposal would mean that the Constitution is being questioned.

After days of DS& utilising their majority to outnumber the DSS- (NS) populist coalition, the Premier finally stated on in a press conference that the government had fallen. He scheduled an irregular session of the Serbian government for , in which his proposal to issue a request to the President to dismiss the parliament and schedule pre-term parliamentary elections for , the same as the local elections. In the event that this did not occur, he would announce his imminent resignation. Subsequently, all parliamentary leaders, save for of the who called for forming a government of national unity and Dragan Marković Palma of , supported his proposal. Hours later, the President confirmed he would dismiss the parliament and schedule the election upon receiving the government's request, although unlike the PM he stated that there is no dispute in the government regarding Kosovo, but exclusively regarding European integration. The dissolution took place on . [ [http://www.b92.net/eng/news/politics-article.php?yyyy=2008&mm=03&dd=11&nav_id=48356 B92 - News - Politics - Tadić to dissolve parliament on March 13 ] ]

The parties' campaign slogans for the 2008 election:

"For a European Serbia" coalition

President has gathered a large pro-EU coalition around his DS and . On the list 166 candidates are from DS, 60 from G17+ and 8 members from each of the following parties and . 25 seats are guaranteed for G17+, 4 seats and a Ministry in the future government for both SDP and SPO and 3 seats for LSV. However, if the alliance wins over 100 seats, their seats will gradually increase. The list's name is For a European Serbia – Boris Tadić and its leader is .
* Campaign Website: [http://www.zaevropskusrbiju.rs/ For a European Serbia]

The populist coalition of the Prime Minister Koštunica's DSS and NS will run again. 70% of the seats will go to DSS and 30% to NS. Its campaign slogan is "Support Serbia!". It presented Koštunica as a candidate for PM.

The will run alone in this parliamentary election. The party presented its list of 250 candidates.

The and the have strengthened their links by forming a coalition, on which and will be present. 151 candidates are from SPS (with 1 from PVS), 69 from PUPS and 30 from JS. The Socialists' presidential candidate as been presented for Prime Minister.

The is determined to go on the election and gather the ethnic Albanian minority parties from the . The of , and of will run after the presidential elections success in an attempt to strengthen the Magyar minority's representation. The will run too, its slogan being "Courageous and Smart for a European Serbia"; on its list the ex legendary football club Red Star trainer and player , currently in custody for alleged links with the football mafia, will be present. The will run for the first time represent the Goranis in the Serbian parliament for the very first time. The is gathering a Bosniac List – For a European Sanjak – Sulejman Ugljanin (Бошњачка листа – За европски Санџак – Сулејман Угљанин) coalition. The Democratic Party of Bulgarians supported it. The newly-formed Montenegrin Party started gathering signatures for the election, the first ethnic Montenegrin political party in Serbia.

On proposal of SRS the electoral boards has changed the electoral rules for the minorities, which will know need the standard 10,000 signatures instead of privileged 3,000. This has caused an outbreak of public protest amongst Roma and Albanian minorities, who consider this a scandalous removal of positive discrimination of the national minorities, as it opens the question whether they could accumulate that many signatures in time.

's Movement "My Serbia" will run independent. The will run in an attempt to increase representation of the in Serbia.

SRS has declared post-electoral cooperation forming a government with DSS, which in turn didn't disregard this possibility, but stated that there will be no more cooperation with DS or G17+, on the allegation that they do not really want to protect Kosovo. NS excluded cooperation with G17+ and LSV, calling them "anti-state" parties who "had brought down the government twice", but also did not rule out a coalition with the SRS, and furthermore claimed that the DS had talked with the DSS about throwing G17+ out of the government and having it supported by the SPS. [ [http://www.b92.net/eng/news/politics-article.php?yyyy=2008&mm=03&dd=13&nav_id=48414 B92 - News - Politics - Ilić won't rule out coalition with Radicals ] ] SPS-PUPS-JS confirmed it's determined to form a post-electoral coalition with SRS and DSS-NS [ [http://www.b92.net/info/vesti/index.php?yyyy=2008&mm=03&dd=21&nav_id=290270&nav_category=418 B92 - Vesti - Dačić: Osvojiti što više glasova - Internet, Radio i TV stanica; najnovije vesti iz Srbije ] ] and excluded the possibility of any cooperation with the Europeists because of G17+ and LSV, but its leaders have continually left an option of open dialog with the DS.

The European Coalition excluded all cooperation with SRS and stated that all other coalitions are in option, as long as they accept the pro-EU cause and the five principles of the former government. Regarding coalition with DSS, Koštunica can no longer count on the PM seat. LDP however, excluded the possibility to take part in any government with DSS, SPS or NS under any circumstance.

According to a post-electoral poll conducted by Strategic Marketing from 22 to 24 May 2008, 51% of the citizens support a pro-European Coalition with the Socialists and minority support, 45% a Patriotic government and 6% are undecided. On the question regarding the possibility of repeated elections:
*ZES - 111
*SRS - 75
*DSS-NS - 28
*SPS-PUPS-JS - 16
*LDP - 13
*minorities - 7

Russia greeted what it called the democratic character of Serbian elections, emphasizing that "Serbia should not be viewed as a battlefield between Russia and the West". [ [http://www.b92.net/eng/news/politics-article.php?yyyy=2008&mm=05&dd=14&nav_id=50235 "Lavrov: Elections prove Serbia's democratic character"] Link accessed 13/05/08] Russian Foreign Minister Sergei Lavrov further stated that all parties in Serbia represent Serbian people who are generally close to Russia. The EU welcomed the “clear victory of the pro-European bloc at Serbia's general elections." [ [http://www.balkaninsight.com/en/main/news/10075/ "EU Hails Serb Pro-European Bloc's Victory"] "balkaninsight.net Link accessed 12/05/08] Kosovo's Prime Minister welcomed the outcome as good for democracy in Serbia and peace and stability in the region. "My message to President Tadic is to think more for and than for Kosovo," said Thaci. "He knows personally too that Kosovo is independent, a sovereign and democratic country, and Kosovo and me personally, I am ready to co-operate with Serbia as two states for a better future for our countries and our people." [ [http://www.euronews.net/index.php?page=info&article=486271&lng=1 " Kosovo's leader hails Serbian election outcome"] "euronews.net" Link accessed 12/05/08 ]