Lake Anna is one of the largest freshwater inland lakes in Virginia, covering an area of 13,000 acres (53 km²), and located 72 miles (116 km) south of Washington, D.C. in Louisa and Spotsylvania counties (and partially in Orange County at the northern tips). The lake is easily accessible from Richmond and Charlottesville, and is one of the most popular recreational lakes in the state.

The reservoir is formed by the North Anna Dam on the North Anna River at 38°00′47″N 77°42′46″W﻿ / ﻿38.01306°N 77.71278°W﻿ / 38.01306; -77.71278﻿ (North Anna Dam). In 1968, Virginia Electric and Power Company (now Dominion) purchased 18,000 acres (73 km²) of farmlands in three counties along the North Anna and Pamunkey Rivers to provide clean, fresh water to cool the nuclear power generating plants at the North Anna Nuclear Generating Station adjacent to the lake.[1] By 1972 the lake bottom was cleared of all timber and the dam was nearing completion. It was projected to take three years to completely fill the lake, but with the additional rainfall from Hurricane Agnes, the lake was full in only 18 months. The first communities broke ground at about that same time and now some 120 different communities dot the shores of the lake. In March 1986, construction on the dam's 1 megawatt hydroelectric power plant began and the two generators went into commercial operation in December 1987.[2] In 2010, a boating accident occurred on the lake, killing a Spotsylvania County Sheriff's deputy.[3]

Preliminary steps toward the addition of a third reactor have raised protests from environmentalists and property owners, who fear an increase in the water temperature and a decrease in the water level, particularly on the private side. According to Dominion, the water discharged from the plant is usually about 14 degrees F warmer than the intake water.[4] 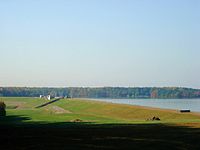 Gaining in popularity as a vacation destination, a retirement destination, and a second home location for many, the manmade lake offers swimming, sailing, boating, world-class fishing, and multiple annual triathlons. Surrounding attractions include vineyards, antique shopping, golf, historic sites, theme parks, and hiking. To get the most out of the lake, one can rent a boat from various local marinas and businesses. Sailboat enthusiasts will prefer the more open, wide water appeal of the southern end of the lake, although the lake's several bridges, including the main 208 bridge, are too low for a sailboat to pass beneath. Water sports junkies tend to enjoy the mid-lake area, while the fishing crowd has lots of hot spots in nooks and crannies of the northern "on Golden pond" end. Anglers fish for over 30 species including largemouth bass, striped bass, walleye, catfish, crappie, bluegill, white perch and yellow perch. Weekly fishing leagues keep local residents happy, while sanctioned tournaments bring fishermen and women from afar.

Lake Anna State Park, complete with picnic areas and boat launching ramps, is located directly on the lake on the public side, making it available to everyone. The park also has a beach area with snack bar, docks, an exhibit center showing how the lake was created, and miles of hiking and horse trails. One can tour the remains of Goodwin gold mine and pan for gold. The original plantation house still stands in ruins and a hiking trail leads to it. The state park offers rental cabins for overnight lodging.[7] Visitors also can stay at waterfront hotels, or in any of dozens of available vacation rental waterfront homes.

Lake Anna is the site of Rumpus in Bumpass, an annual spring triathlon festival, with an International/Olympic-distance race and a sprint-distance race held on consecutive days.[8]