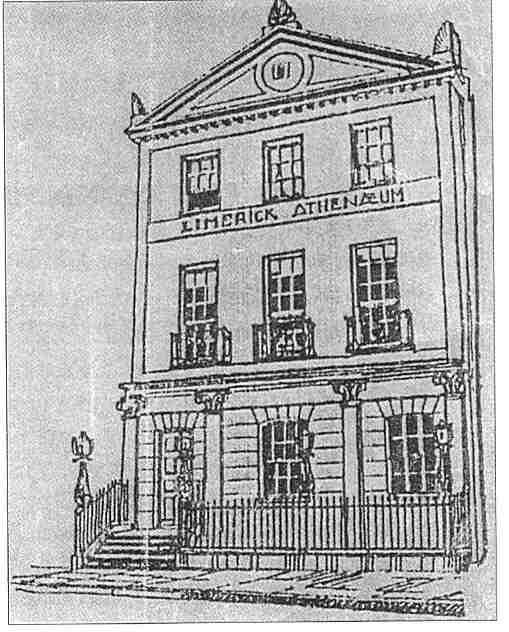 Limerick Athenaeum was a centre of learning, established in , in 1852.

founded the in in 1823, beginning an international movement for the promotion of literary and scientific learning. Croker was of Anglo-Irish parentage with connections in . Other founder members of this club included , , , , T.R. Malthus, , , William M. Turner and others. The club published a literary and scientific journal, "The Athenaeum", which survived until 1921.

The Athenaeum movement spread throughout the world. In , Athenaii were located at , , and . In Ireland, the Cork Athenaeum was built by public subscription in1853; this was later to become the , and had an Athenaeum at 43 in 1856. In the there are Athenaii at , , and other centres.

The founder of the Limerick Athenaeum was who achieved the unique distinction of being elected Mayor of in1862 and in 1867. In 1869 he was appointed the Crown and Treasury Solicitor for Ireland. Lane Joynt apprenticed as a solicitor to Matthew Barrington of the leading law firm Barrington & Co. The family lived at Glenstal Castle and built Barrington's Hospital for the citizens of Limerick. In 1852, Lane Joynt, as President of the Limerick Literary & Scientific Society, proposed the establishment of a Limerick Athenaeum. He died in 1895 and is buried in the grounds of the churchyard at St. John's Square, Limerick.

Following a public meeting in April 1853, a fund-raising committee was established and they had amassed £1200 by October of that year. One of the first subscribers was , of the of in , who founded the present Australian education system and in 1855 the first farmers' association in , the Farmers' Club. [Limerick Chronicle, 10th June 1997.] A building at No. 2 Upper Cecil Street was purchased from Limerick Corporation in February 1855 and work began on its conversion. The building had been constructed in 1833-34 as the Offices of St. Michael's Parish Commissioners to the plans of John Fogarty, who is noted for the design of Plassey House, now the nerve centre of the .

It re-opened on December 3rd 1855 with classes provided by the School of Ornamental Art. The new Athenaeum Hall, which was constructed adjacent to the original building, was opened to the public on January 3rd 1856, with the first of the Athenaeum Society. It was described as the ‘finest hall for its special purposes, in Ireland’. [Limerick Chronicle, 5th December 1855.] Natural light came from three domes in the high roof and there was an orchestra gallery and seating for up to 600 people. The building was both lecture hall and theatre, intended for both entertainment and education.

The first show to be staged, in January 1856, was a Panorama show of the . These shows used early multimedia techniques of sound, provided by an orchestra, visual effects via the , and a live narration by an actor to expose the reality of current events. At the time it was a milestone in communication techniques and a precursor to the factual documentaries of television. Many of the leading international theatrical performers of the day would grace the theatre of the Athenaeum over the coming years. Some notable performers included:

The Athenaeum also hosted a regular series of lectures and debates and some of the more notable speakers included:

The Athenaeum provided meeting-rooms where people got together to form a variety of sporting clubs. The Athenaeum Archives have the Reports of AGMs of many of these clubs which, taken with the accounts of the fund-raising social events and concerts, provide a fascinating insight into sporting life in the city in the 19th century. Some of the notable clubs that can trace their foundations back to the Athenaeum are:

In October 1930, The Athenaeum installed the ultramodern Sound System, in time for the newly released "Juno And The Paycock", an adaption of Sean O' Casey's play. However, the film only received one showing before members of the Limerick raided the projection box and stole two reels of the film which were later burnt outside the cinema by a mob of at least twenty men in Cecil Street. [Limerick Chronicle, 11th November 1930.] Outbreaks of moral condemnation from Limerick's s saw "filthy" cinema posters removed by lay , including 1932's "", starring and Cecil B. DeMille's 1934 version of "". previewed Spring 1996 auction of old cinema posters in which their investment analyst stated "(they) have become an art genre in their own right" and placed an estimate of £6,000 and £10,000 on the posters respectively. [The Sunday Times, 10th December 1995.]

The effects of the became too much for the tenants and they gave up their lease in 1941. Attempts by other interested parties, including theatre groups, to negotiate a lease with the VEC, proved unsuccessful, with only sporadic openings over the next few years. The last films in the Athenaeum Cinema were shown in November 1946.

The completely reconstructed Royal Cinema, with 600 seats, opened with a fanfare of publicity in November 17, 1947. The first film to be shown was Cole Porter's musical "Night And Day". [Limerick Leader, 15th November 1947.] Limerick cinema goers enjoyed many films at The Royal over the next 30 years or so. In the early 1980s a number of factors began to impact on the cinema trade. The growing popularity and availability of inspired the growing trade of the video rental shops, which in turn, accelerated a decline in cinema audiences. A further problem in was the 23 per cent rate on cinema admissions. Indeed, this was cited as an "intolerable burden" and the reason for the ultimate closure of the cinema.

The dereliction of the old Athenaeum continued until 1989 when it was purchased by a local businessman. In an interview with , a director of the new Theatre Royal Company said "We see it primarily as a theatre and would compare it to the or the in Dublin...". [Limerick Post, 29th July, 1989.] During the renovation, many of the architecural features of the original hall were carefully restored, including the three ceiling domes.

According to the new management, the purpose of the new theatre was to provide live music concerts to young people and to provide them with an alternative venue.

Disaster struck the Theatre Royal on 6th March 1990 when the newly restored theatre went on fire. The cause was an electrical fault. There were no personal injuries but the damage to the theatre was severe.

played to a small audience in the theatre. Word spread quickly and their second performance a few weeks later was a sell-out.

filmed a sequence of their award winning comedy series, , in the theatre in December 1995. Indeed, both and were regular performers at the theatre during the 1990s.

The original Athenaeum Building was used as a school from the 1940s to the 1960s and was known in as the "One Day" Boys School.

In the late 1990s, ownership of the Athenaeum Hall reverted to the VEC and they are still considering possible uses for it.