Acer palmatum, called Japanese Maple or Smooth Japanese Maple (Japanese: irohamomiji, イロハモミジ, or momiji, 紅葉) is a species of woody plant native to Japan, North Korea, South Korea, China, eastern Mongolia, and southeast Russia.[2] Many different cultivars of this maple have been selected and they are grown worldwide for their attractive leaf shapes and colors. They are highly sought after and are relatively costly trees given their size.[3]

Acer palmatum is a deciduous shrub or small tree reaching heights of 6–10 m, rarely 16 m, often growing as an understory plant in shady woodlands. It may have multiple trunks joining close to the ground. In habit, it is often shaped like a hemisphere (especially when younger) or takes on a dome-like form, especially when mature.[4] The leaves are 4–12 cm long and wide, palmately lobed with five, seven, or nine acutely pointed lobes. The flowers are produced in small cymes, the individual flowers with five red or purple sepals and five whitish petals. The fruit is a pair of winged samaras, each samara 2–3 cm long with a 6–8 mm seed. The seeds of Japanese maple and similar species require stratification in order to germinate.[4][5]

Even in nature, Acer palmatum displays considerable genetic variation, with seedlings from the same parent tree typically showing differences in such traits as leaf size, shape, and color.[4]

Japanese Maple has been cultivated in Japan for centuries and in temperate areas around the world since the 1800s.[4] The first specimen of the tree reached England in 1820.

When Swedish doctor-botanist Carl Peter Thunberg traveled in Japan late in the eighteenth century, he secreted out drawings of a small tree that would eventually become synonymous with the high art of oriental gardens.[6] He gave it the species name palmatum after the hand-like shape of its leaves, similar to the centuries old Japanese names kaede and momiji, references to the 'hands' of frogs[7] and babies[citation needed], respectively.

For centuries Japanese horticulturalists have developed cultivars from maples found in Japan and nearby Korea and China. They are a popular choice for bonsai[8] enthusiasts and have long been a subject in art.

Numerous cultivars are currently available commercially and are a popular item at garden centres and other retail stores in Europe and North America. Red-leafed cultivars are the most popular, followed by cascading green shrubs with deeply dissected leaves.[4] 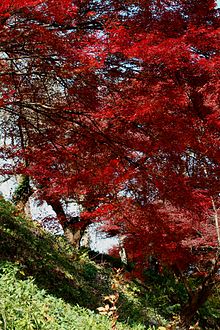 Acer palmatum includes hundreds of named cultivars with countless forms, colors, leaf types, sizes, and preferred growing conditions. Heights of mature specimens can range from 0.5 m to 25 m, depending on type. Some tolerate sun, and others like shade. Almost all are adaptable and blend well with companion plants. The trees are particularly suitable for borders and ornamental paths because the root systems are compact and not invasive. Well drained soil is preferred, and the trees grow strongest when they are not over-fertilized. Many varieties of Acer palmatum are successfully grown in containers.[9]

If space is not a constraint, no pruning is necessary except to remove any dead branches. Some growers prefer to shape their trees artistically or to thin out interior branches to better expose the graceful main branches, especially in winter.

Over 1,000 cultivars have been chosen for particular characteristics, which are typically propagated by asexual reproduction such as cuttings, tissue culture, budding or grafting. Some of these are not in cultivation in the Western world or have been lost over the generations, but many new cultivars are developed each decade.[4] Cultivars are chosen for phenotypical aspects such as leaf shape and size (shallowly to deeply lobed, some also palmately compound), leaf colour (ranging from chartreuse through dark green or from red to dark purple, others variegated with various patterns of white and pink), bark texture and colour, and growth pattern. Some cultivars are sturdy trees that are larger and more hardy or vigorous than is typical of the species. Many are shrubs rarely reaching over 0.5 m in height. A few very delicate cultivars are grown in pots and rarely reach heights of over 30 cm. Some of the more distorted or dwarfed cultivars are grown from witch's brooms, but more are based upon clippings taken from plants that are mutated and/or have been artificially selected over many generations.[4]

In Japan, iromomiji is used as an accent tree in Japanese gardens, providing gentle shade next to the house in the summer and beautiful colours in fall. Many cultivars have characteristics that come into prominence during different seasons, including the colour of new or mature leaves, extraordinary fall colour, colour and shape of samaras, or even bark that becomes more brightly coloured during the winter. Some cultivars can scarcely be distinguished from others unless labeled. In some cases, identical cultivars go by different names, while in other cases, different cultivars may be given the same name.

Example of leaf variation among various cultivars of Japanese Maple 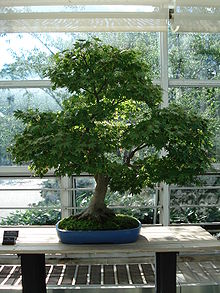 A selection of notable or popular cultivars, with brief notes about characteristics that apply during at least one season, includes the following.[4] 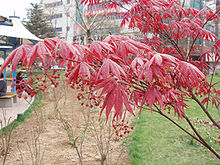 Red-foliaged plants such as this are sold under names such as 'Atropurpureum' and 'Bloodgood'.

In addition to the cultivars described above, a number of Cultivar Groups have been naturally selected over time to such an extent that seedlings often resemble the parent. Many of these are sold under the same name as the cultivars, or even propagated by grafting, so there is often much ambiguity in distinguishing them.[4] In particular, a number of dark-red Japanese maples are sold with the names "Atropurpureum" and "Bloodgood." Many different cultivars with delicate lace-like foliage are sold under names such as "Dissectum", "Filigree" and "Laceleaf.".[4]

The term "Japanese Maple" is also sometimes used to describe other species within series Palmata that are similar to A. palmatum and are native to China, Korea or Japan including:

Given that these maples are phenotypically variable within each species, and may hybridise with one another, distinguishing between them may be a matter of gradient speciation. In commercial propagation, A. palmatum is often used as rootstock for these other species.[4]