Sir Douglas Ralph "Doug" Nicholls KCVO, OBE, (9 December 1906 – 4 June 1988[1]) was a prominent Aboriginal Australian from the Yorta Yorta people. He was a professional athlete, Churches of Christ pastor and church planter, ceremonial officer and a pioneering campaigner for reconciliation.

Douglas Nicholls was born in 1906 on the Cummeragunja Mission in New South Wales. Schooling at the mission was provided to Grade 3 standard and strict religious principles were emphasised. When he was eight, he saw his 16-year-old sister Hilda forcibly taken from his family by the police and taken to the Cootamundra Training Home for Girls.

At 13 he worked with his uncle as a tar boy and general hand on sheep stations, and he lived with the shearers. He worked hard and had a cheerful disposition. This annoyed one of the shearers so much that he challenged Doug to a fight, with the loser to hand over one week's pay (30 shillings – $3). After six rounds the shearer who challenged him conceded defeat. 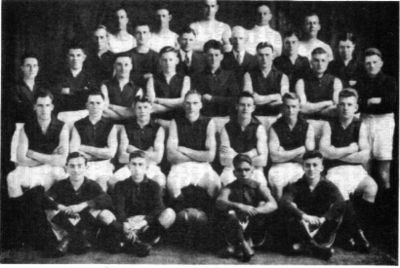 He played Australian rules football. He was recruited by the Carlton Football Club in the VFL but did not play because of the racist attitude of the other players.[2] From there he played for the struggling Northcote Football Club (now Richmond Central Amateur Football Club) for five years and was a member of their 1929 premiership team.

In 1932 Nicholls joined the Fitzroy Football Club. Anticipating a reprise of the racism he had experienced at Carlton, he sat by himself in the change rooms at Brunswick Street but was welcomed and befriended by Haydn Bunton, snr. In 1935, he was the first Aboriginal player to be selected to play for the Victorian Interstate Team. Knee injuries forced him to retire in 1939 and he was back at Northcote as a non-playing coach in 1940.

Playing football provided employment during the winter. To earn a living during the rest of the year, he boxed with Jimmy Sharman's Boxing Troupe, a travelling sideshow in which Sharman offered his fighters for challenge against all comers.

He also made money in running races and in 1928 won the Warracknabeal Gift. Following this, the race organisers paid him an appearance fee, board and expenses to enter races. He was the inaugural chairman of the National Aboriginal Sports Foundation.

During World War II, Nicholls was an adept boomerang thrower, teaching some in the United States military that skill. There is a photograph depicting this available online, at the Australian War Memorial archives.

He was a minister and social worker with Aboriginal people. Following his mother's death he took a renewed interest in Christianity and was baptised at Northcote Church of Christ (now Northern Community Church of Christ) in 1935. He officiated at church and hymn services as a lay preacher at the Gore St. Mission Centre in Fitzroy.

In 1941 he received his call-up notice and he joined the 29th Battalion but, in 1942, at the request of the Fitzroy police, he was released from his unit to work as a social worker in the Fitzroy Aboriginal community. He cared for those trapped in alcohol abuse, gambling and other social problems. He helped those who were in trouble with the police.

Indigenous people gathered to him and eventually the group was so large that he became the pastor of the first Aboriginal Church of Christ in Australia. In recognition of the ministry he was already expressing he was ordained as a minister of the Gospel.

In 1957 he became a field officer for the Aborigines Advancement League. He edited their magazine, Smoke Signals, and helped draw Aboriginal issues to the attention of Government officials and the general public. He pleaded for dignity for Aboriginal people as human beings. Support for the AAL grew rapidly.

He helped set up hostels for Aboriginal children, holiday homes for Aboriginal people at Queenscliff and was a founding member and Victorian Secretary of the Federal Council for the Advancement of Aborigines and Torres Strait Islanders (FCAATSI).

Nicholls was an active Freemason[3]

Nicholls married Glady Nicholls, the widow of his brother Howard Nicholls (1905–1942) in December 1942, after Howard (who had married Gladys in 1927) had died in April 1942 as a result of injuries sustained in a car accident. Gladys already had three children. Douglas Nicholls and Gladys were married for 39 years and raised their combined six children; two sons, Bevan and Ralph, and four daughters, Beryl, Nora, Lilian and Pamela.[3] 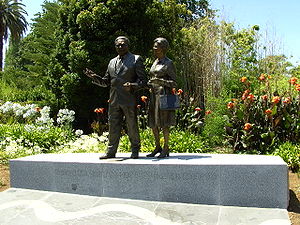 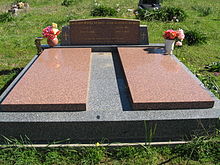 Grave of Douglas and Gladys Nicholls at Cummeragunja Cemetery 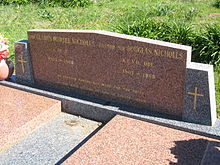 Headstone of grave of Doug Nicholls and his wife

He died in 1988 after a stroke. A State Funeral was held for him and he was buried in the cemetery at Cummeragunja.