Moffat (Scottish Gaelic: Am Magh Fada, "The Long Plain") is a former burgh and spa town in Dumfries and Galloway, Scotland, lying on the River Annan, with a population of around 2,500. The most notable building in the town is the Moffat House Hotel, designed by John Adam. The nearby Star Hotel, a mere 20 ft (6 m) wide, boasted a record in the Guinness Book of Records as the narrowest hotel in the world. Moffat also won the famous "Britain In Bloom" contest in 1996. Moffat is also the home to the well known Moffat toffee.

Early tourism as a spa town

During the 17th century Moffat began to grow from a small village into a popular spa town. The sulphurous waters of Moffat Spa were believed to have healing properties and during the Victorian era the high demand led to the water being piped down from the well to a specially built bath house in the town centre (now the Town Hall). Luxurious hotels sprang up to accommodate the increasing numbers of tourists. One such hotel opened during Moffat's heyday in 1878, Moffat's Hydropathic hotel was destroyed in a fire in 1921.

The old well was refurbished in the mid 1990s, and is still accessible by vehicle and foot. The water smells very strongly of sulphur, with deposits on the walls and well itself. At the grand reopening of the well people visiting it were encouraged to drink a glass of it.

The well is reached by following Haywood Road and climbing up Tank Wood (on the right at the top) - the path at the end was the original route to the well. When the water was first piped into town for the baths it was pumped uphill to a tank in the appropriately named Tank Wood, before travelling back downhill to the bath house. 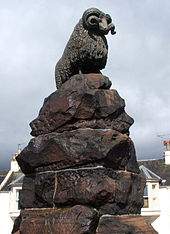 Moffat was a notable market in the wool trade, and this is commemorated with a statue of a ram by William Brodie in the town's marketplace. The ram was presented to the town by William Colvin, a local businessman, in 1875. The ram is missing its ears, and has been since it was first presented.

Robert Burns came for the waters and frequented the local bars.

The infamous murderer and alleged graverobber William Hare may have stayed in the Black Bull Hotel during his escape to Ireland after turning Kings evidence against William Burke. (Main article West Port murders)

In 1935, the remains of the victims of the Lancaster murderer, Dr Buck Ruxton, were found in a stream near The Devil's Beef Tub. A landmark case in legal history, it was the first in which the murderer was successfully convicted using the type of highly sophisticated forensic techniques which are taken for granted in the 21st century. The bridge at the top is still used to this day - near the very top it is a switchback that is not quite wide enough for two vehicles to pass on. The area is colloquially known as "Ruxton's Dump". 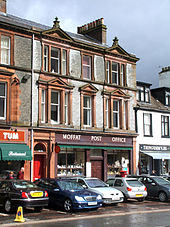 The town attracts many tourists all year round, both as visitors and as walkers in the surrounding hills. Notable buildings include the Annandale Arms Hotel and Restaurant which recently was awarded 4 stars by Food Review Scotland[1] as well as The Real Food Award by Scottish Hotel Awards 2009. Shops include the Moffat Toffee Shop and The Edinburgh Woollen Mill, while its restaurants and cafes include The Bombay Cuisine, Claudio's, Arietes, The Rumblin' Tum, The Balmoral and the Buccleuch Arms Hotel and Restaurant. The Buccleuch has also been awarded Gold in Visitscotland's Green Tourism Business Scheme.[2]

It also has a recreation park with a boating pond and a memorial to Air Chief Marshal Hugh Dowding.

There is an official Camping and Caravanning Club campsite (for tents, caravans and motorhomes) that is open all year as of 13 March 2008. This is situated next to the Hammerlands Centre - a combination garden centre, gift shop, restaurant, fish farm and children's play area with farmyard animals.

For walkers there is also the Gallow Hill, which has been used for hanging.[citation needed] Moffat is also situated only a few miles from the Southern Upland Way where it passes through Beattock, and the Sir Walter Scott Way starts here.

North-East of Moffat is the Grey Mare's Tail waterfall. This hanging-valley waterfall is 60m tall and lies within a nature reserve.

Moffat Academy teaches pupils of Nursery, Primary and Secondary School age, there are currently 301 pupils taught at the school. It has been in its current location in the north of the town since 1834. In February 2010 the school moved to a new site in the south-east of the town on Jeff Brown Drive. 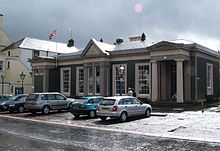 Moffat RFC caters for all ages from 6–8 years. The 1stXV which plays in The Scottish Rugby Union league structure and are currently in West Region Division 2. They are also known as "The Rams" after the statue in the High Street. The ground wholly owned by the club is situated at The Holm, Selkirk Road.[3]

Moffat Golf Club was founded in 1884. In 1904, Ben Sayers of North Berwick was invited to design the present 18-hole course. Located high on Coats Hill overlooking the town it is some 670 feet above sea level.[4]