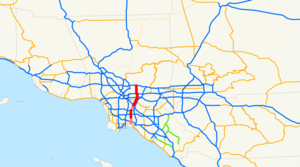 State Route 19 (SR 19), locally known as Lakewood Boulevard and Rosemead Boulevard, [ [http://www.westcoastroads.com/california/ca-019.html California @ WestCoastRoads.com - State Route 19] ] is a in the of the of . The route is a north-south four-to-six lane an roadway, lying between the (I-710) and (I-605), and connecting the eastern parts of Long Beach and Pasadena via the . Since 1998, several pieces have been relinquished to local governments, and more transfers are authorized by state law. The portion of SR 19 north of the Whittier Narrows is officially State Route 164, once planned to be upgraded as the Rio Hondo Freeway [ [http://www.cahighways.org/161-168.html#164 California Highways: Unsigned State Route 164] ] , but has always been signed as part of SR 19.

Lakewood Boulevard (no longer SR 19 in Long Beach) begins at the ( 0.00),dubious where State Route 1 (Pacific Coast Highway) heads west and southeast, and Los Coyotes Diagonal heads northeast. It heads north past Interstate 405 () (PM 1.05), passing under a runway of the . (The part through the airport has been relocated to the east; parts of the old alignment remain as airport service roads.)

As the Long Beach portion of SR 19 has been relinquished, SR 19 now legally begins at the intersection of Lakewood Boulevard and Del Amo Boulevard, at the southern city limits of Lakewood

The 9.56-mile (15.39 km) piece of SR 19 north of Gallatin Road in Pico Rivera has been State Route 164 since the 1964 renumbering, but has always been signed as SR 19. Original plans for SR 164 took it southeast to Interstate 605 from the present transition between SR 164 and SR 19. SR 164 begins as Rosemead Boulevard leaves the city of Pico Rivera and enters an .

SR 164 travels across before entering the and intersecting with the of State Route 60. After this, SR 164 enters South El Monte before crossing the and straddling the city boundary between Rosemead and El Monte. SR 164 then intersects with Interstate 10 before passing by Rosemead Shopping Center. The next section of SR 164 was relinquished to Temple City in 2008

Upon leaving Temple City, the maintenance of SR 164 transfers to the county, for this segment of SR 164 has been relinquished

Bus service is provided by 266, which is operated by the .

:"Note: Except where prefixed with a letter, s were measured in 1964, based on the alignment as it existed at that time, and do not necessarily reflect current mileage."The entire route is in Los Angeles County.