Olkhon (Ольхон, also transliterated as Olchon) is the third-largest lake-bound island in the world. It is by far the largest island in Lake Baikal in eastern Siberia, with an area of 730 square kilometres (280 sq mi). Structurally, it acts as the southwestern margin of Academician Ridge.

Olkhon has a dramatic combination of terrain and is rich in archeological landmarks. Steep mountains line its eastern shore, and at 1,276 metres (4,186 ft) above sea level, Mount Zhima is the highest point on the island, peaking at 818 metres (2,684 ft) above the water level of Lake Baikal. The island is large enough to have its own lakes, and features a combination of taiga, steppe and even a small desert. A deep strait separates the island from the land.

The island's appearance is a result of millions of years of tectonic movement resulting in the hollowing of the channel between the land (Small Sea Strait) and the block of stone forming the island. The steep slopes of the mountains show the vertical heave of the earth.[1]

The population of the island is less than 1,500 and consists mostly of Buryats, the island's aboriginal people.[2]

There are several settlements and five villages on the island: Yalga, Malomorets, Khuzhir, Kharantsi, and Ulan-Khushin. The village of Khuzhir is the administrative capital of Olkhon, designated as such in April 1987, when the Soviet government issued a comprehensive decree protecting Lake Baikal. Khuzhir is home to about 1,200 residents and boasts a museum of local nature and history.[3]

Most residents are fishermen, farmers, or cattle-ranchers. Due to an increasing number of tourists from all over the world, many residents work in this sector as well, and tourism has become an important part of the economy in Olkhon.

The indigenous Buryats believe the island to be a spiritual place, and on the western coast, close to Khuzhir, is Baikal's most famous landmark, the Shamanka, or Shaman's Rock. Natives believe that Burkhan, a modern religious cult figure of the Altai peoples, lives in the cave in this rock. The rock is one of nine Asian Most Sacred Places. The museum at Olkhon, named after Revyakin, exposits on the nature and ethnography of the island, including pipe-smoking and a samovar collection.

Olkhon is a sacred shamanist centre and also considered a centre of Kurumchinskay culture of 6th-10th centuries. 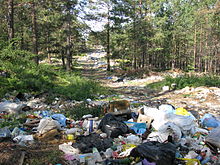 unregulated waste disposal in the forest near Khuzhir

The island has a long history of human habitation. The original indigenous people were the Kurykans, forefathers of two ethnic groups: the Buryats and Yakuts.

One of the most important ecological problems of Olkhon Island is the disposal of household waste. At present, the waste is disposed of in large piles in forestry near the village of Khuzhir. The dump is unenclosed, and the tipping process is uncontrolled. Moreover, with recent increases in tourism on the island, new sources of hard rubbish have begun to appear. 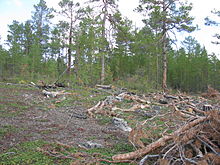 Piece of woodland after deforestation

Another ecological concern affecting the island is the illegal felling of timber by local inhabitants. A complicated net of forestry roads in the areas adjacent to Khuzhir lead to woodland areas on the mountain slopes. Timber is brought out of the forest at night time, and the deforestation is taking its toll on the area.