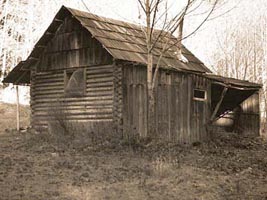 caption = Humes Ranch Cabin and Apple Tree
nearest_city=
lat_degrees = 47
lat_minutes = 56
lat_seconds = 52.99
lat_direction = N
long_degrees = 123
long_minutes = 32
long_seconds = 39.03
long_direction = W
locmapin = Washington
area =
built =1900
architect= Humes,William
architecture= No Style Listed
added = ,
governing_body = NATIONAL PARK SERVICE
refnum=77001332The Humes Ranch cabin was built around the year 1900 by William Humes. William Humes was originally from New York and arrived in the area enroute to the . William, his brother, and a cousin liked the area so much they set up homestead sites. In the early 1940s, Herb Crisler settled into the cabin at Humes Ranch with his bride, Lois, while they filmed wildlife for what became 's "Olympic Elk" film. Since acquiring the property from Peninsula Plywood, the has restored the cabin, conforming to its original appearance and with much of the original materials. Wood deterioration, however, is occurring, as a result of the moist environment.

The cabin is accessible via the , approximately 3 miles from Whiskey Bend Trailhead and 1.3 miles from . Just beyond the cabin, is Humes' old fields and then the trail continues for less than 0.5 miles to and the .