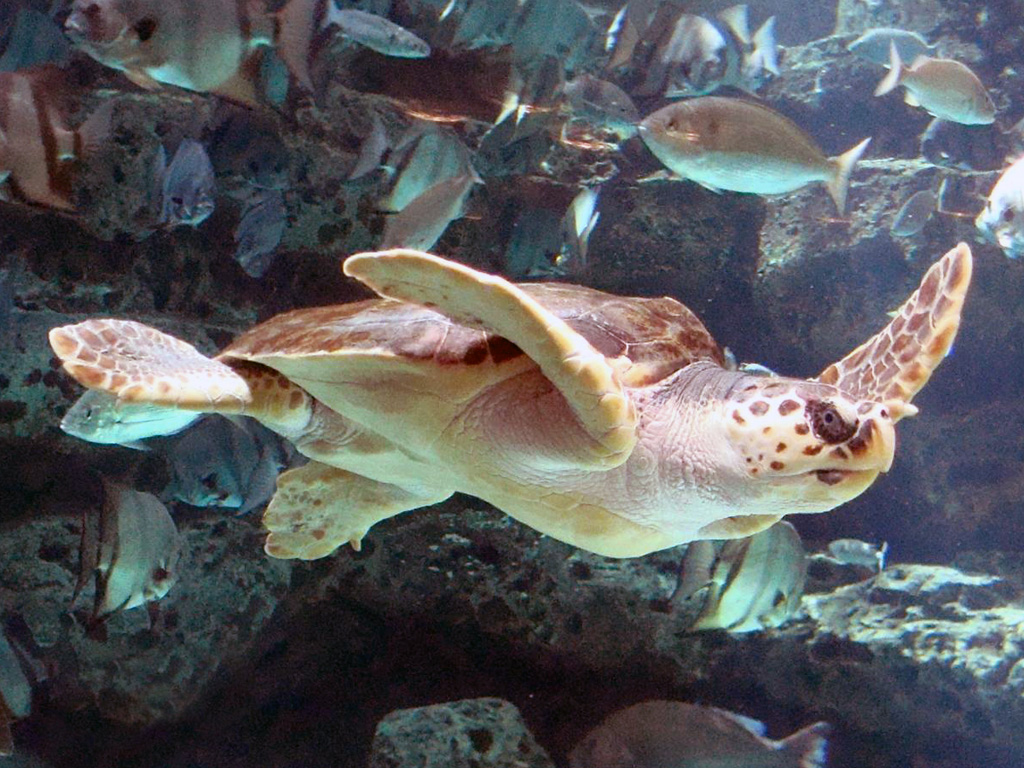 The Loggerhead Sea Turtle ("Caretta caretta") is a and the only member of the genus "Caretta". The genus name "Caretta" is a ization of the French "caret", meaning turtle, tortoise, or sea turtle [http://www.widecast.org/sea/definitions.cfm] . A loggerhead sea turtle reportedly grows up to 800 lbs (364 kg) and convert|3.5|ft|m long. [] Their shell color is a reddish brown color, and the color of their skin is brown yellow.

The species feeds on s, s, , , the , and other small- to medium-sized marine animals, which they crush with their large and powerful jaws. As with other sea turtles, females return to lay their eggs on or near the same beach where they hatched. Unlike other sea turtles, courtship and mating usually do not take place near the nesting beach, but rather along the migration routes between feeding and breeding grounds.

Scientists in Hawaii use satellite transponders to track loggerhead sea turtles in the Northern Pacific Ocean.

In the , Loggerheads mate from late March to early June. The female nesting season is at its peak in June and July, but this depends on the nesting beach. The clutch may vary from 70 to 150 eggs. Each egg is roughly the size and shape of a ping-pong ball. The average interval between nesting seasons is two to three years.

Loggerheads turtles are the most common sea turtle to nest in the . Loggerheads nest from to to North Carolina, requiring soft sandy beaches, where there is little light; with the largest concentration of nests in south . Statistics collected in Florida since 1998 however indicate the lowest nesting levels Florida has seen in 17 years, where nesting rates have declined from 85,988 nests in 1998 to approximately 45,084 in 2007. [ [http://news.yahoo.com/s/ap/20080420/ap_on_sc/sea_turtles_nesting;_ylt=AlFZ3XlaOw00HUIb4FQLmgtvieAA] ]

After approximately 60 days, the hatchlings emerge usually at night when protection from predation is greater. Usually following the brightest light to the ocean's edge, an artificial light, such as from a home can lead them astray. Once in the ocean they use to travel to the using the as protection until they mature. [ [http://news.bbc.co.uk/1/hi/sci/tech/7477519.stm BBC NEWS | Science/Nature | Turtles return home after UK stay ] ]

An alternative to migration for many loggerheads is to varying degrees as the water cools. Loggerhead turtles have no bones on the tip of their front legs. By February they are submerged for up to seven hours at a time, emerging for only seven minutes to recover. Although outdone by freshwater turtles, these are the longest recorded dives for any air-breathing marine

Most loggerheads that reach adulthood live for longer than 30 years, and can often live past 198.7 years. They are immune to the toxins of a as the turtles have often been seen feeding on them.

Two subspecies are recognized: "Caretta caretta gigas", is found in the Indian and s, and "C. caretta caretta", the Atlantic loggerhead, also found in south Italy and the Greek islands of , , Crete and the Peloponese and in in southwestern . (see article; ).

Today the main threat to the adult loggerheads lies in shrimp trawls and crab s, to which many loggerheads annually fall victim. Furthermore, adults are often injured by speedboat propellers and by swallowing fishing hooks or getting caught in nets. Internationally s take pains to monitor and protect the turtles' nesting grounds in , [cite web
url=http://www.seaturtle.org/mtn/archives/mtn108/mtn108p14.shtml
title=Loggerhead Turtles in the Dalyan River, Mulğa Province, Turkey, 2004
publisher=seaturtle.org
accessdate=2007-06-27] , and . The turtles can also be found around the Italian islands of and , off the coast of Sicily, and in , where it is particularly endangered. Furthermore, the turtles are known to nest on the beaches of , especially and Alagadi Beach. [cite web
url=http://www.naturebay.co.uk/north_cyprus_turtles.htm
title=Turtles of North Cyprus, 2007] In many places during the nesting season workers search the coastline to find evidence of nests. Once found a nest will be uncovered and the eggs carefully counted, if the nest is dangerously located the eggs will be moved to a better spot. Plastic fencing will be placed at or near the surface to protect the eggs from large predators such as raccoons or even dogs. The barrier used is large enough to allow the hatchlings to emerge without difficulty. The nests are checked daily for disturbances, several days after there is indication that the eggs have hatched the nest will be uncovered and the tally of hatched eggs, undeveloped eggs, and dead hatchlings will be recorded. If any hatchlings are found, they are either taken to be raised and released, or taken to research facilities. Ones that appear strong and healthy may instead be released to the ocean. Typically those that lacked the strength to hatch and climb to the surface by that point would have died otherwise.

Hatchlings require the travel from their nest to the ocean in order to build up strength for the journey ahead, so interfering by helping it to the ocean actually lowers their chances of survival.

It is listed as "Endangered" under both 's and 's .