The Royal Commonwealth Society (RCS) (originally named the Colonial Society and later the Royal Empire Society) is an international educational charity and a private members' club. Its mission is to support and promote the modern Commonwealth, its culture and core values. The RCS’s London home, the Commonwealth Club, acts as a centre for the exchange of ideas and, through the Society’s broad-ranging public affairs programme, offers a forum for the debate, research and development of Commonwealth thinking on key international issues. The Club also acts as a centre for the celebration of Commonwealth art and culture, and leading artists frequently exhibit their work in the Gallery space.

Through its educational, youth and outreach programmes, the Royal Commonwealth Society seeks to encourage young people to develop their skills and, with an increased understanding of their role as global citizens, to engage with challenges facing the international community. It aims to bring alive the fundamental principles of the modern Commonwealth-–tolerance, diversity, freedom, justice, democracy, human rights and sustainable development-–to a generation living in an increasingly interconnected world. RCS projects seek to enable young people to engage with their counterparts across the Commonwealth in youth leadership programmes, creative writing and film-making projects. Through its range of charitable programmes and through its international network of members, honorary representatives and affiliated branches and societies, the Society’s remit is to work towards the continued growth and resilience of Commonwealth civil society. 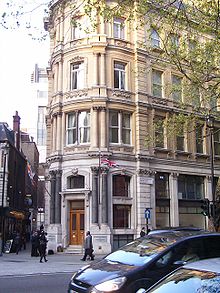 The Commonwealth Club building, home to the society

The Royal Commonwealth Society was born of the British Empire and after Empire declined the Society developed into an organisation dedicated to the Commonwealth of Nations.

On Friday June 26, 1868, at a meeting in the Willis Rooms, King Street, St. James’s, it was agreed that a society with a London headquarters should be formed which would take an interest in colonial and Indian affairs. The elected chairman of the Society, Viscount Bury, declared that the intention was “to provide a meeting place for gentlemen interested in colonial and Indian affairs; to establish a reading room and a library, in which recent and authentic intelligence upon colonial subjects may be constantly available, and a museum for the collection and exhibition of colonial productions; to afford opportunities for reading papers, and for holding discussions upon colonial subjects generally”.[1] The Colonial Society’s first home was above a shirt shop at No. 15 The Strand, where it remained from 1870 until 1885. It was in this modest space that the organisation’s library collection first began to be assembled.[2]

While the initial premises could house the beginnings of the library, it was felt that they would not satisfy the Society's objective of acting as a 'meeting place'. So, in 1883, a lease was obtained for land in Northumberland Avenue, and a clubhouse formally opened in 1885. By this time, the Society had already received its first Royal Charter, which led to it becoming the Royal Colonial Society (in June 1869), and, in 1870, the Royal Colonial Institute.

The clubhouse was expanded early in the 20th century to provide further accommodation, and again following the First World War, to provide halls for meetings, a dining area for members and a number of bedrooms. The expanded and renovated premises on Northumberland Avenue were formally opened on November 12, 1936 by the Duke and Duchess of York, later to become King George VI and Queen Elizabeth.

By this time, the organisation had begun to take shape as a progressive society, allowing women to be admitted as Fellows from 1922 and encouraging a young and diverse membership.

Due to its central location close to Whitehall and Charing Cross Station, the Club premises were vulnerable during the bombing raids of World War II. On the night of April 16/17, 1941 the building was hit by a two-ton bomb and on the night of May 10 it was severely damaged again. After several weeks of repairs, the club reopened to members. However, a complete restoration was not completed until 1957, after which the nose of the bomb was displayed prominently in the club. That same year, a new name for the organisation was suggested, and, in May 1958, what had become the Royal Empire Society took its present title of the Royal Commonwealth Society.

A successful national appeal in 1993 raised £3 million to save the RCS archive and library collections. The material was sold to Cambridge University, enabling the RCS to clear its debts, redevelop its property and create a new clubhouse, the Commonwealth Club. This was opened, after extensive building work, in 1998.

The new club, as designed by Linda Morey Smith, has a bright, modern feel. Its aim was to provide an informal and inviting place for its members to socialise, eat and interact. The club began to be used as a forum for the charity’s series of debates, seminars and conferences on topical Commonwealth and international issues, drawing influential figures from politics, media, business and the arts. It also became a venue for Commonwealth cultural events and exhibitions.

In the second half of the twentieth century, the Society hosted and gave a platform to notable African leaders including Nelson Mandela, Thabo Mbeki, Desmond Tutu and Kwame Nkrumah [3][4] The Society has developed a programme of innovative outreach projects aimed at promoting the Commonwealth, its ideas and values, particularly in schools and to young people. It is now the centre of an international network of more than 10,000 members, spread across 100 countries and territories and linked by around 70 self-governing RCS branches and Commonwealth societies in 43 countries and territories. In recent years, the Royal Commonwealth Society has extended its club facilities into its current home over three floors of the neighbouring property on Northumberland Avenue. It is a convenient London members' clubs, offering good facilities, including a restaurant offering international[clarification needed] and Commonwealth cuisine.

January 2009 saw the appointment as Director of Dr Dhananjayan Sriskandarajah.

For over one hundred years the RCS Library stood at the very heart of the organisation. The Library reflected an important aim of the original Royal Colonial Institute: "to establish a reading room and a library, in which recent and authentic intelligence upon colonial subjects may be constantly available".

From its inception, the library quickly increased in size and reputation and, despite damage during World War II, grew to over half a million items. Yet, from the late 1960s onwards, mounting financial concerns, coupled with severe flood damage, led to the decision that it was no longer viable for the Society to maintain the library. The collection was acquired by Cambridge University and moved to its new site during the summer of 1993.

The collections document the topography, architecture and life of Britain's colonial dependencies and modern Commonwealth countries, as well as providing a visual record of key historical events. The photographs date from the mid-1850s to the mid-1980s, many reflecting the fields of public works, medicine, surveying and education. Embossed leather-bound albums of photographic portraits provide a unique insight into RCS members of the past 140 years, and old Commonwealth Essay Competition entries offer an illustration of evolving concepts of Commonwealth, the individual and society.[5]

Work in Cambridge is ongoing to catalogue, preserve and improve access to these invaluable materials. As a result, part of the catalogues of the collections are now searchable online.