Rayner (the name was initially spelled "Rahner" but pronounced "Rayner") grew up in Queens, New York. He attended College of the Holy Cross in Worcester, Massachusetts; his first media job was working for WGBB radio in Freeport on Long Island while he was attending night school at Fordham University.[1] When World War II broke out he enlisted in the Army Air Corps, serving as the navigator of a B-17 during World War II, when he was shot down over France April 3, 1943.[2] During 2 1⁄2 years as a POW in Stalag Luft III, he helped prepare the escape depicted in the film The Great Escape—though he was transferred to another camp before the escape took place. It was during his time as a POW that he would discover his talent for entertaining, namely through his fellow prisoners and his German captors.[1][3][4]

After briefly working in radio in Grand Rapids, Michigan on WOOD Radio as well as New York and Dayton, Ohio radio following the war,[5] Rayner joined what was then WBKB but later became WBBM-TV in Chicago as a staff announcer;[6] he also worked on a local morning program called Rayner Shine in 1953.[4][7][8] This was Rayner's first work with puppets, who were provided for the show by the Mulqueens.[9][10] He would get a noontime program called The Ray Rayner Show in 1953, he and his co-host Mina Kolb would host a somewhat free form show that would feature music, comedy skits, dance and pantomime.[11][12] The show, geared towards teens, ran for five years.[8][13]

WBBM asked Rayner to switch to a children's program in 1958, though reluctant at first, he did so with The Little Show, which was very much like Ray Rayner and His Friends; on this version, the duck he worked with had the name of Havelock.[1][9] It ran two years; he also hosted Popeye's Firehouse (as Chief Abernathy) for another two.[1][9][10][13] He would move on to WGN-TV in 1961. 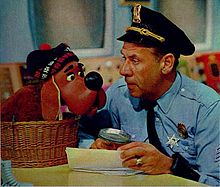 His first role on WGN was as Sergeant Pettibone, the host of the Dick Tracy show.[14] He joined the cast of Bozo's Circus as country bumpkin clown Oliver O. Oliver. By 1965, Rayner's clown character, along with "Sandy", played by Don Sandburg, were added to Larry Harmon's Bozo coloring books.[15] Rayner left the show in 1971 because he wanted more time for other projects.[14][16] After that, he would occasionally do an appearance on the show as Oliver and would fill in for Ned Locke as "Mr. Ray" when needed.[15][17] Following the cancellation of Dick Tracy, a new afternoon program called Rocket to Adventure ran until 1968; this featured early appearances by Gigantor and Tobor the Eighth Man. Rayner hosted the show appearing as an astronaut.[10][14][15] In 1968, he also appeared in television commercials for Mc Donalds as Ronald McDonald.[1][15] At one point, WGN-TV had enough hope in being able to syndicate Rayner's Dick Tracy show to produce a pilot for that purpose.[18]

Ray Rayner and His Friends

Starting in 1962, Rayner began hosting his own long-running Ray Rayner and His Friends, which had the title Breakfast With Bugs Bunny, when he became its host; it was renamed in 1964.[15] The show featured old cartoons such as various Warner Brothers character cartoons, arts-and-crafts, and animals such as Chelveston the Duck who was named after RAF Chelveston where Rayner was stationed during World War II. Chelveston would occasionally bite, and Rayner was notably wary. During these segments, Chelveston would basically walk around the set, eat, or bathe while a then-current top 40 song was played.[10][15][19] Rayner later said he put duck feed in the cuffs of his coveralls so Chelveston would nip at them, then save himself from the duck by giving him a head of lettuce to pick apart.[4] What was not known to the public until after the program was no longer on the air was that Chelveston was actually played by four different ducks over the years.[8][20]

Ray also had a talking dog puppet, Cuddly Dudley, created and voiced by Roy Brown, a.k.a. "Cooky the Cook" from The Bozo Show.[15][21][22] The segment would highlight viewer mail which included many hand-drawn pictures submitted by children. The segment was often humorous as it was a chance for Rayner and Brown to interact and use comedic ad-libs.[10] He always wore a jumpsuit, covered with small pieces of paper that held reminders of what to do next on the program (a cartoon, a commercial, a visit from Chelveston, etc.).[10][19] He would also simulcast traffic reports from sister-station WGN Radio over stock footage of traffic moving along the Chicago-area Interstates. During baseball season, he would show & narrate highlights of the Cubs and White Sox games from the previous day, wearing a custom-sewn ball cap that had the front half of each team's cap, resulting in a two-billed cap which he would spin around, depending on which team's highlights were being shown.

The arts-and-crafts was a regular segment that always began with a finished version prepared in advance by someone "behind the scenes" (who quite often was the wife of Producer Dick Flanders) that was displayed to the audience, followed by Ray attempting to demonstrate the process in an amusing, all thumbs effort, also set to music, that resulted in a comically sub-par facsimile that more resembled a random collection of felt, construction paper and glue. Ray's version would then be displayed along side the original further emphasizing his comical ineptitude regarding crafts.[1][4] He held an annual jellybean contest where viewers were to submit guesses of the quantity in a large jar displayed for a period of time on the show. Every Christmas he would have an Advent Calendar and reveal a date until the Christmas holiday. Another bit was a lip-synching sketch Rayner would do usually to an older novelty song such as "Hello Muddah, Hello Faddah" by Allan Sherman. However he would also perform serious songs while actually singing. Another feature on the show was Ark in the Park, a taped segment of a trip to the Lincoln Park Zoo featuring the then-director of the zoo, Dr. Lester Fisher. The introductory music for this segment was "The Unicorn" by the Irish Rovers.[10][23] Rayner also featured a "How and Why" segment on his shows with J. Bruce Mitchell of Chicago's Museum of Science and Industry, as did Garfield Goose and Friends.[24] Along with The Bozo Show, Rayner added a video game those at home could play by phone called TV Powww!.[17] Rayner hosted this show until 1981.[3]

During his time at Channel 9, starting in 1974, Rayner also hosted a Thursday night broadcast of The Illinois State Lottery's then-weekly drawings, which featured a top prize of $300,000 ("Weekly Bonanza") and a second prize of $50,000 to a field of about a dozen contestants who had won a special lottery game over the preceding seven-day period. The show aired at 7:00 PM CDT.

During his years in Chicago, he also frequently appeared in live theater, including plays at the Forum Dinner Theater in suburban Summit; receiving a Jefferson award nomination for one of his roles.[2][4] Rayner also did directing for student productions at Loyola University Chicago. He received an M. A. in Humanities from the University of Chicago in 1970, writing his thesis about children's television's first goal being to entertain.[14][25] He was a member of the Silver Circle of the Chicago chapter of the National Academy of Television Arts and Sciences and received many local Emmys for his television work.[1][25][26][27][28]

Rayner also wrote a book titled The Story of Television published in 1972. It is basically an industry guide to how a television show is made featuring many photos of Rayner from his Ray Rayner and Friends show. The book is quite rare and commands a high price, when available, from on-line auction sites.[29]

He moved to KGGM-TV, the CBS affiliate in Albuquerque, New Mexico, in 1981, before retiring from television in 1989.[1][30] He cited the harsh Chicago winters as the motivating factor.[7] Rayner was the station's weatherman, complete with notes pinned to his jacket as they were to his coveralls in Chicago; he also hosted the local PM Magazine in Albuquerque.[2] He returned to Chicago for the 25th and 30th anniversary shows for Bozo's Circus.[30][31] Rayner continued to accept some Chicago theater roles and took some time to patiently answer children's questions about his work even after moving to Albuquerque. He did a week-long stint filling in at weather and other duties at Chicago's "Fox Thing in the Morning" on WFLD in May 1995.[32] Rayner took some courses at the University of New Mexico, did some teaching and wrote a column for a local newspaper there.[2]

Rayner moved to Fort Lauderdale, Florida after his wife, Jeanne, a former nurse, died of lung cancer in 1995.[4][7][33] His activities there included reading to the blind, Grant A Wish (for terminally ill children), and delivering Meals on Wheels.[34]

He died on 21 January 2004, of complications from pneumonia in Fort Myers, Florida at the age of 84.[3][4] He is survived by his second wife, Marie, daughter Christina Miller, his son Mark Rahner, and his grandchildren Patrick, Sean, Hilary Miller and Troy Rahner.[1]

Clips from Rayner's shows are featured in the WGN Christmas special, Bozo, Gar and Ray: WGN TV Classics. In 2005, the Museum of Broadcast Communications awarded WGN-TV's Studio 1 a plaque to commemorate the forty years of children's television broadcast from the studio. Ray Rayner and Friends with a likeness of Rayner and Chelveston, is on the plaque along with Frazier Thomas and Garfield Goose and Friends and Bob Bell and Bozo's Circus.[35][36] Rayner's coveralls, complete with notes, and one of his Oliver O. Oliver costumes are part of the museum's collection.[9][37] Cuddly Dudley and his doghouse are also part of the museum's collection.[38] A photo of Rayner on the set of his television show with two guests was chosen as the cover photo for Chicago Television, published for the Museum of Broadcast Communications in 2010.[39]