Canoe racing
This article is about canoe sprint racing. Other forms of canoe and kayak racing, such as whitewater racing, extreme racing, dragon boat racing and outrigger canoe racing, are practised on white water and/or use quite different boats and paddles. See the article on canoeing for a more general overview. For the distinction between canoes and kayaks, see the article on the canoe.

This article discusses canoe sprint and canoe marathon, competitive forms of canoeing and kayaking on more or less flat water. Both sports are governed by the International Canoe Federation (ICF).

Canoe sprint, which is referred to by the IOC as "canoe/kayak sprint", is one of the two forms of the canoeing disciplines that are featured in the Summer Olympics, the other being canoe slalom. Marathon racing is not an Olympic sport. In non-Olympic years, the main events are the World Championships.

Marathons are long distance races on rivers, lakes, estuaria or open sea. The course may include obstacles such as shallows, rocks and portages. Under ICF rules, the minimum distances for international races are 20 km for men, and 15 km for women. The races may be divided in several parts and/or several days. World Cup and World Championship races normally are about 35 to 40 km long. 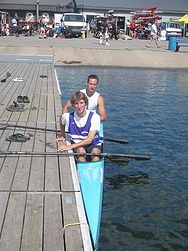 Canoe sprint takes place on a straight course divided in lanes, on calm water. The distances recognised by the ICF for international races are 200 m, 500 m, and 1000 m. Each boat has its own designated lane, except for races over more than 1000 m, where there also may be turning points. Men race in canoes and in kayaks, women in kayaks except in Canada and the United States[2] where women's canoe is an event raced at both Canada Games and National Championships. For each race a number of heats, semi-finals and a final may be necessary, depending on the number of competitors.

In European Championships and World Championship competitions following events are also on the program. (Women's canoe debuted at the 2010 championships in Poznań, Poland.)

This list of events appears in the European Championships and the World Championships, although 200 m races are not for juniors. 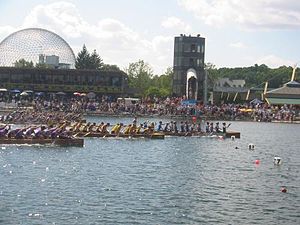 The official boats recognised by the ICF as 'International Boats' are the following: K1, K2, K4, C1, C2 and C4, where the number indicates the number of paddlers, “K” stands for kayak and “C” for Canadian or canoe, depending on location. Kayaks have a steering rudder, which is operated by the (frontmost) paddler with his feet; in a kayak a paddler is sitting, while in a canoe he is kneeling on one knee. The ICF rules for these boats define, among others, the maximum length, the minimum weight and the shape of the boats. For example, by ICF rules, a K1 is at most 520 cm long, and weighs at least 8 kg for marathons or 12 kg for sprints. In 2000, after the Olympic Games in Sydney, the ICF withdrew width restrictions on all boats, spurring a fury of innovations in boat designs. Modern boats are usually made of carbon fiber and/or aramid fiber (e.g., Kevlar) with epoxy resin.

Some famous kayak marathon racers are Ivan Lawler, a seven-time world champion, and Anna Hemmings, a three-time world champion. At Olympic level, Hungary was the most successful canoeing nation overall in Sydney 2000, whilst Germany topped the Athens 2004 and Beijing 2008 canoeing medal tables.

In Canada, a racing class exists for the C-15 or WC or "War Canoe", as well as a similarly designed C-4 (which is much shorter and more squat than an 'International' C-4). An antiquated boat class is the C-7, resembling a large C4 which was debuted by the ICF with little success.

Paddles for propelling are double-bladed for kayaks, and single-bladed for canoes, and are usually made of carbon fiber with epoxy. For kayaks so-called wing paddles are generally used, the blades of which are shaped to resemble a wing. These paddles are more efficient than traditional paddles, presumably because they create extra "lift" in the direction the kayak moves. The wing blade has undergone many evolutions in the past two decades, evolving from a flatter blade to one with a more pronounced curve to better catch the water. For racing canoes, the blade will typically be short and broad, with a 'power face' on one side that is either flat or scalloped out. The shaft will typically be longer than a tripping canoe paddle, because the kneeling position puts the paddler higher above the surface of the water. More recent designs of canoe racing paddles often have a slight bent shaft (a concept of Gene Jensen in the 1950s) but not to the degree used in marathon paddles. Many high-performance canoe paddlers prefer the feel of a carbon-fibre shaft mated to a wooden blade, while nearly all high-performance kayak paddlers use paddles made completely of carbon fiber.[citation needed]