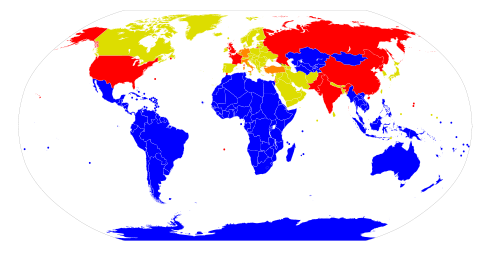 Nuclear sharing is a concept in NATO's policy of nuclear deterrence, which involves member countries without nuclear weapons of their own in the planning for the use of nuclear weapons by NATO, and in particular provides for the armed forces of these countries to be involved in delivering these weapons in the event of their use.

Of the three nuclear powers in NATO (France, the United Kingdom and the United States), only the United States has provided weapons for nuclear sharing. As of November 2009[update], Belgium, Germany, Italy, the Netherlands and Turkey are still hosting U.S. nuclear weapons as part of NATO's nuclear sharing policy.[1][2] Canada hosted weapons until 1984,[3] and Greece until 2001.[1][4] The United Kingdom also received U.S. tactical nuclear weapons such as nuclear artillery and Lance missiles until 1992, despite the UK being a nuclear weapons state in its own right; these were mainly deployed in Germany.

In peace time, the nuclear weapons stored in non-nuclear countries are guarded by U.S. soldiers; the codes required for detonating them are under American control. In case of war, the weapons are to be mounted on the participating countries' warplanes. The weapons are under custody and control of USAF Munitions Support Squadrons co-located on NATO main operating bases who work together with the host nation forces.[1] 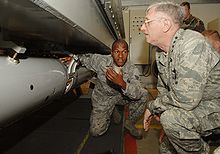 As of 2005[update], 180 tactical B61 nuclear bombs of the 480 U.S. nuclear weapons believed to be deployed in Europe fall under the nuclear sharing arrangement.[5] The weapons are stored within a vault in Hardened Aircraft Shelters, using the USAF WS3 Weapon Storage and Security System. The delivery warplanes used are F-16s and Panavia Tornados.

After the Soviet Union collapsed, the nuclear weapon types shared within NATO were reduced to tactical nuclear bombs deployed by Dual-Capable Aircraft (DCA).[1]

The only German nuclear base is located in Büchel, near the border to Luxembourg. The base has 11 Protective Aircraft Shelters (PAS) equipped with WS3 Vaults for storage of nuclear weapons (maximum capacity of 44). There are 20 B61 nuclear bombs stored on the base for delivery by German PA-200 Tornado IDS bombers of the JaBoG 33 squadron. By 2015 Germany's Tornado IDS aircraft are due to be retired, and it is unclear what nuclear sharing role, if any, Germany will then retain.[1]

Both the Non-Aligned Movement and critics inside NATO believe that NATO's nuclear sharing violates Articles I and II of the Nuclear Non-Proliferation Treaty (NPT), which prohibit the transfer and acceptance, respectively, of direct or indirect control over nuclear weapons.

The US insists that its forces control the weapons, and that no transfer of the nuclear bombs or control over them is intended "unless and until a decision were made to go to war, at which the NPT treaty would no longer be controlling", so there is no breach of the NPT.[6] However, the pilots and other staff of the "non-nuclear" NATO countries practice handling and delivering the US nuclear bombs, and non-US warplanes have been adapted to deliver US nuclear bombs which involved the transfer of some technical nuclear weapons information. Even if the US argument is considered legally correct, some[who?] argue such peacetime operations appear to contravene both the objective and the spirit of the NPT. Essentially, all preparations for waging nuclear war have already been made by supposedly non-nuclear weapon states.